Bureau of Land Management
Bird is the word in Colorado and other western states, after Interior Secretary Ryan Zinke signed a secretarial order calling for a review of current federal and state sage-grouse conservation plans.

The greater sage-grouse, a loud, ornately adorned bird found in eleven western states, including Colorado, Wyoming and Idaho, has been at the center of controversy since it was nearly placed on the Endangered Species List in 2002 and 2003. With the aim of avoiding such a listing, western states created a massive strategic conservation system that the U.S. Fish & Wildlife Service cited as a reason not to list the bird as endangered.

The states, particularly Colorado, worked with the Bureau of Land Management, as well as local governments and stakeholders, to develop a nationwide conservation plan for the greater sage-grouse. The Obama-era regulations met with varying levels of approval, however, and Zinke's recent decision to review these regulations has been both lauded and condemned.

According to John Swartout, rural policy and outreach director for Governor John Hickenlooper, Colorado had decided to actively work with the BLM on the conservation plan, but also committed to a "robust stakeholder process," ensuring that landowners have a voice in a conservation strategy that directly affects them.

"We invested $60 million into research and conservation of the greater sage-grouse, and landowners have stepped up and worked on this with us," Swartout says. In cooperating on multiple levels and investing in strategies to avoid an endangered listing, he adds, "Colorado has put our money where our mouth is."

Proud of this collaborative accomplishment between the state, the federal government and local landowners, Swartout says that the governor's office hopes that whatever Zinke does while reviewing the sage-grouse plans, it won't imperil the work that Colorado has already done. 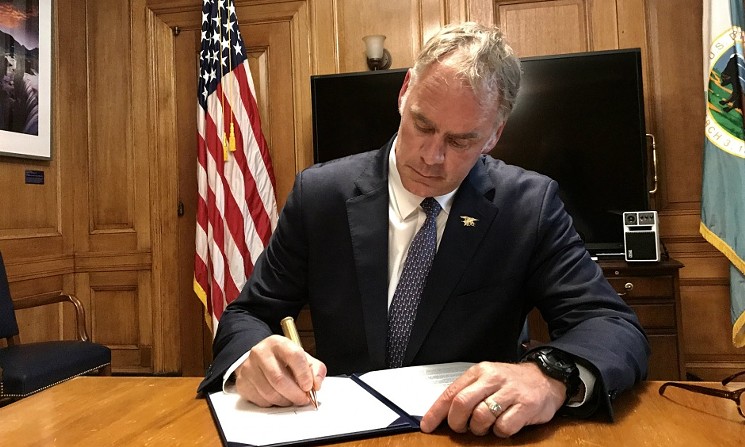 Secretary Ryan Zinke signing the sage-grouse order.
U.S. Department of the Interior
“We will give the order a close review to better understand the details," Hickenlooper said in a statement. "I have encouraged Secretary Zinke to maintain the collaborative approach that has made sage-grouse protection so successful to date. We will continue to work with Colorado stakeholders, governors and the Sage Grouse Task Force.”

In contrast, the Republican governor of Idaho, Butch Otter, issued a statement commending Zinke's "commitment to review the Obama Administration’s draconian sage-grouse plans." Otter's "draconian" description alludes to a debate over whether the federal government's plans have precluded energy development on the public lands in question; in fact, Zinke's statement announcing the order notes that "the team will be asked to identify plan provisions that may need to be adjusted or rescinded based on the potential for energy and other development on public lands."

"Nothing in the statement defines what is going to be done," Swartout points out. "The truth is, it isn't an either/or problem. You don't have to destroy local economy to protect the sage-grouse. We believe we can maintain a wealthy economy and protect this species with the right approach."