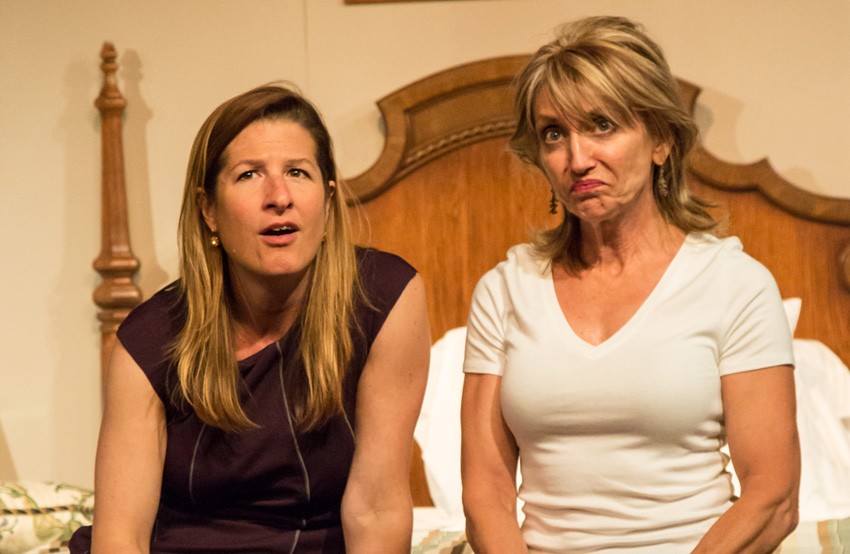 RDG Photography
Emily Paton Davies (left) and Patty Ionoff in Mud Blue Sky.
Playwright Marisa Wegrzyn has the antidote for that outdated image of flight attendants as beautiful young women patrolling the aisles in high heels, frolicking in hotel rooms with handsome male passengers on their layovers. Remember Jet Blue attendant Steven Slater, who lost his temper with a rude passenger as the plane landed, grabbed a beer and popped it, then opened the emergency chute and slid down and out of his job? The three women in Wegrzyn’s Mud Blue Sky, currently in a regional premiere at Edge Theater, are too exhausted for this kind of gesture, but their plight does reveal the depressing realities of a flight attendant’s life, the things that could drive any sane person to a flashy revolt: bathrooms overflowing with diarrhea, snotty tissues stuffed in seat pockets, physical problems caused by constant lifting and walking, drab hotel rooms, lack of sleep, miserly retirement packages.

In a hotel room near Chicago’s O’Hare, Beth, in constant pain with a bad back, just wants to settle into her bed and grab as much sleep as she can before the alarm jolts her awake at 5 a.m. — but not before connecting with seventeen-year-old Jonathan, who, through a set of odd and very funny circumstances, became the provider of her pain-killing weed a while back. Jonathan, having just left an unsatisfactory prom, is loitering in the parking lot in his tux. Meanwhile, fellow flight attendant Sam wants Beth to go out drinking with her. Sam also carries on a series of phone conversations with the teenage son she’s been forced to leave at home to fend for himself — as she’s had to do far too often in the past. He’s not very good at fending for himself, and has just tried to wash plastic forks in the dishwasher. Angie, laid off by the airline because she gained weight, joins the others in the second act. She’s a bit listless: Despite all, she misses the camaraderie of the skies.

The play is very funny, with lots of sharp passages of dialogue, angles you don’t expect, and boundary-pushing moments. Should a seventeen-year-old be selling dope? Is it okay for an older woman to come on to him? But the plot doesn’t cohere. In fact, there really isn’t a plot. Hints are dropped that never pay off. You may not be looking for everything to click neatly into place, but you are expecting some kind of focus...which never happens. When Angie has a long monologue about a devastating work experience, you see it as an example of the odd, episodic life of a flight attendant; it doesn’t attach to what’s happened before or what’s to come — though it does evoke a rather wonderful gesture of empathy from young Jonathan.

Erik Thurston, Emma Messenger and Emily Paton Davies in Mud Blue Sky.
RDG Photography
What makes this a must-see production is director Robert Kramer’s casting. With Emma Messenger as Angie, Emily Paton Davies as Sam and Patty Ionoff playing Beth, you fear that young Erik Thurston’s Jonathan will be blown off the stage by the hurricane of female talent. No need to worry: Thurston’s honest, confused and quietly appealing Jonathan easily holds his own. Paton Davies is a hilariously shameless Sam — her comic timing is impeccable — and you feel all of Messenger’s tamped-down sadness. I swear, Ionoff gets better every time I see her. It’s hard to play someone as beaten down by life as Beth, but she makes the character subtle, wise and gently compelling. The performances mesh like an intriguing tennis foursome: serve, hit, parry, backspin, wander off to find a stray ball, abandon the game, maybe come back.

Though it’s not defined or brought to the surface, an undercurrent runs through the action: Jonathan, with most of his life in front of him, seems as lost as the women. There’s something unique and sweet about his relationship with Beth, who might be more motherly toward him if she believed she had any adult wisdom to impart. Wicked, party-loving Sam reveals some depth of feeling, too, as things progress. Whether or not the plot coheres, it’s a lot of fun watching these people struggling through their own confusion and bewilderment.