Water World
Walliver plans to bring back the one-piece for men. And walruses.
Welcome Water World’s new mascot: Walliver, successor to and nephew of former mascot Wally the Walrus. Over 1,200 names were submitted in a recent Water World contest to name Walliver after he emerged "from the same arctic sea cave" that his famous uncle came from some thirty years back; his identity was revealed late last week. As the old saying goes, it's a tough job, but some walrus has to do it.

Walliver joins an active throng of local mascots who make Colorado that much more colorful. But that’s not to say that all mascots were created equally. Colorado has mascots good, bad and very, very ugly. Here's how they stack up:

Hector the Sea Otter — currently between jobs.
Cory W. Watts at Flickr
5. All of the Frontier Animals
I think we can all agree that at this point, Frontier Airlines is a hollow shell of its former self. But back in the heyday of Denver’s hometown airline, it created one of the best and most memorable ad concepts around. Talking (and funny!) animals that were not only on TV and in print advertising, but also on the tails of the planes? Brilliant. Too bad the ad campaign got largely shelved when massive cutbacks forced the layoffs of most of the talking animals — which, as you might imagine, don’t work cheap.

Blaster may be a slight exaggeration in excitement level.
Mines CERSE at Flickr
4. Blaster the Burro (Colorado School of Mines)
Let’s face it: Most mascots are jackasses. The School of Mines is just admirably honest (and literal) about it. The Mines actually has two mascots — Marvin the Miner being the other — and both accomplish exactly what a good college mascot sets out to do: celebrate and give relevance to the school it represents. 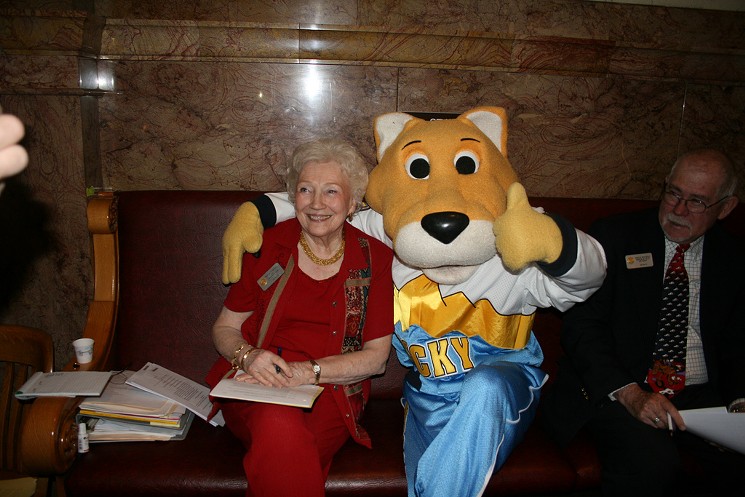 I hear there's actually a pretty big Furry contingent in the Colorado GOP.
Colorado Senate GOP at Flickr
3. Rocky (Denver Nuggets)
Rocky the Mountain Lion suffers a bit from his team’s lackluster performance over the past four seasons, as the Nuggets once again failed to be a factor in the NBA Western Conference. But Rocky is still a winner, and his antics are considered among the best in the NBA. Hey, if you can’t win games as often as you’d like, you can at least have a reason to smile, right? That’s what Rocky provides for stalwart Nuggets fans.

Ralphie looks forward to the day when he's allowed to cross the field without all these slow-ass cowboys.
smoddelm at Flickr
2. Ralphie (University of Colorado Boulder)
Ralphie the Buffalo isn’t just the best-known college mascot in Colorado, he’s one of the classic college mascots in the country. When Ralphie comes out to run, it’s not only an amazing sight — it’s a harbinger of good things. The old-school attraction of a live animal tromping around the track cannot be denied.

Thunder is the horse, by the way.
Jeffrey Beall at Flickr
1. Thunder (Denver Broncos)
Would Thunder top this list if the Broncos didn’t lead the roster of Colorado’s favorite teams? Probably not — but such is the lot of the mascot. Always the obligatory bridesmaid, never the focal-point bride. Still, Thunder has a lot of history behind him: His name recalls the stomping that fans were famous for at the old stadium, and the stout and regal image of a horse galloping across the field never gets old. Thunder celebrates every Broncos score during the game, so here's hoping he continues to ride strong and often come fall.