Andrea Moore
Kalyn Heffernan of Wheelchair Sports Camp is heading into the second day of a sit-in with the disability rights group ADAPT, at Republican Senator Cory Gardner's office.
A sit-in almost turned into a shit-in when disability rights activists with ADAPT started needing to use the restroom — which had been shut down — after they had spent the night in Republican Senator Cory Gardner's Denver office, trying to force him to vote against a Republican healthcare proposal that the Congressional Budget Office says would leave 22 million uninsured by 2026.

"We brought in a makeshift shitter," says activist and musician Kalyn Heffernan, the MC with Wheelchair Sports Camp, which won Best Hip-Hop Group at the 2017 Westword Music Awards on Tuesday, June 27, the same night she was occupying the senator's office.

When the DIY toilet arrived, "I think that’s when they they decided to let us [into the restroom]," she says. "Once that came in, shit got real. We had so much coffee, someone was bound to shit."

It's not like the activists were holding back their bodily functions. After they had been denied the restroom on Tuesday, several activists urinated in the senator's office in cups, bottles, a trash can, diapers and through catheters.

"We all just peed in his office! Victory," Heffernan texted me on Tuesday.

Gardner's state director narrowly avoided a shitty situation by opening the bathrooms up today, June 28, ADAPT activists say. The state director has been accommodating, although he has not responded to the activists' demands, laid out below.

ADAPT is demanding Gardner sign this statement pledging to vote against any bill that would reduce Medicaid funding for seniors and people with disabilities.
Kalyn Heffernan
Gardner's office, which has yet to say whether the senator will support the Republican-led bill, has not returned e-mails and phone calls from Westword about the situation.

Volunteers brought the activists food throughout the night, and the protesters have no plans to leave until Gardner commits to opposing the bill or the police drag them out.

"People are spoiling the shit out of us," Heffernan says. "We have so much food. It was like the most privileged protest we’ve ever been at — minus sleeping in here. That was not great."

Most of the activists slept on the floor, others in their chairs. Heffernan says it was like sleeping at the airport: hard floors, bright lights and crammed conditions. But as a touring musician, she's more accustomed to roughing it out than some of her comrades. 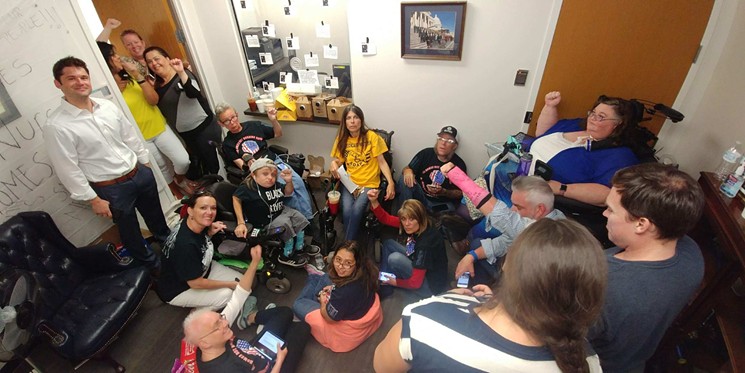 The ADAPT protest at Gardner's Denver office continues for a second day.
Cherish