The Ten Tastiest Events on the Culinary Calendar This Week

Despite the generally accepted wisdom, we actually think dinner is the most important meal of the day. It's certainly the most diverse (you can have pancakes for dinner, after all), and it's still the only meal where it's acceptable to unabashedly break out some adult beverages (you've got to rename breakfast "brunch" in order to get a cocktail before noon and avoid sounding like an alcoholic, though). This week, there's a plethora of dinners: raw dinners, cooked dinners, wine dinners, beer dinners, experimental dinners, farm dinners, art dinners. Here are nine dinners to enjoy this week, culminating in a big tenth event: The Big Eat.

Check out Cho77 for a bizarre — but delicious — beer dinner.
Danielle Lirette
Monday, July 10
Love food but hate cooking? Don't want to taint your pristine ingredients with anything that might transform their God-given properties? Or maybe it's just too damn hot and you don't want to fire up the oven. Vital Root, 3915 Tennyson Street, has the solution for you: It's hosting a Raw Pop-Up Dinner on Monday, July 10. It's a deal at just $27 for four courses, which will include sliders with mushrooms, avocado mash, walnuts and coconut bacon; and a Napoleon parfait with cranberry and cherry mousse. Service starts at 5:30 p.m.; e-mail [email protected] for reservations, and hurry, because previous raw dinners have sold out. The Facebook page has a complete menu for your consideration.

Scar of the Sea Wines is teaming up with Acorn, 3350 Brighton Boulevard, for a wine dinner to ease you into the work week on Monday, July 10. The evocatively named winery will provide pairings for hamachi crudo, toast topped with butter-braised porcini mushrooms, smoked trout salad and leg of lamb. Dinner starts at 6:15 p.m. and will run you $80; e-mail [email protected] to book your seat.

Dim sum is for breakfast or — at the latest — lunch, right? Not if you're Cho77. Lon Symensma and Ryan Gorby's inventive little spot, 42 South Broadway, is hosting a Dim Sum Beer Dinner with Ratio Beerworks on Monday, July 10. For $49, you'll get five courses, five beers and some truly mind-boggling international mash-ups. Think red-chile pork dumplings with French saison, bacon cheeseburger shumai with Gruyère and an American ale, and coconut barbecue duck with Thai herbs and a chocolate rye Scotch ale. Seatings are at 5:30 and 8 p.m., and tickets ($49) are on sale at nightout.com. 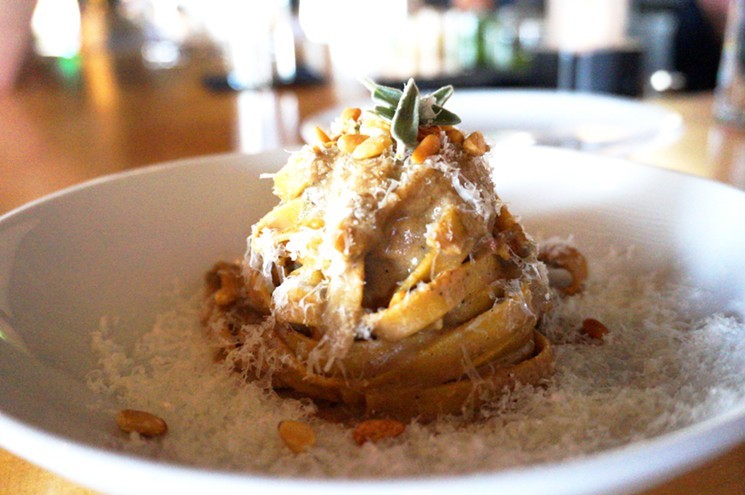 Yak liver tagliatelle: a previous Test Table Tuesday creation that made its way onto the regular menu.
Mark Antonation
Tuesday, July 11
We've written about The Way Back's Test Table Tuesday many times before, but the kitchen just keeps coming up with daring and delicious dishes we can't resist. On Tuesday, July 11, the series presents trout en papillote with kombu and Napa cabbage; banh xeo, a Vietnamese egg crepe generally stuffed with shrimp, pork and herbs that we've loved in restaurants up and down Federal Boulevard; and the showstopper (or gut-wrencher, depending on your proclivities), Blood and Guts, a bright-red pasta made with blood in sweetbread ragu. Order all the experiments as a prix fixe menu for $45, or individually in addition to the regular menu. Reservations for the restaurant, 4132 West 38th Avenue, can be made at the website or at 720-728-8156.

Charcoal is rolling out the red carpet for South African winemaker Jasper Raats of Longridge Wine Estate; on Tuesday, July 11, the restaurant's private dining room at 43 West 9th Avenue will be the setting for a five-course Winemaker's Dinner beginning at 6 p.m. The menu is set to include crab cakes with pickled chiles, baba ganoush made from binchotan-roasted eggplants and za'atar, and hangar steak with charred corn risotto and vegetable ash, along with five wine pairings, all for just $65. To ensure your seat, call 719-359-3353.