File photo
A screen capture from surveillance footage showing Denver Sheriff Department personnel piling on Marvin Booker.
At 5:30 p.m. today, July 10, family members of Marvin Booker, who died in Denver's main jail seven years ago this month during an excessive-force incident that led to a $6 million settlement, will take part in a press conference at which they will demand that Denver District Attorney Beth McCann begin a new investigation into the case. They say a Taser used on Booker is missing, and they believe the story behind its disappearance suggests a potentially criminal coverup.

"There's been lingering grief to know a Taser was used on my brother when he took his last breath," says Reverend Spencer Booker, Marvin's brother, who lives in the St. Louis area. "That particular Taser never came through the investigation by Internal Affairs and never was even presented in the civil trial. So we're coming to ask Ms. McCann to open a criminal investigation — because we want to know why that Taser is still missing seven years later."

Adds Gail Booker, Reverend Booker's wife and Marvin's sister-in-law: "I don't know anywhere in America when a weapon is lost in this kind of situation that they don't keep looking for that weapon. And we continue to seek justice in the death of Marvin Booker."

Early on July 9, 2010, as we've reported, Marvin, a homeless street preacher, was taken into custody on a drug possession warrant and placed in the Van Cise-Simonet Detention Center. While waiting to be processed, he took off his shoes. At approximately 3:30 a.m., he walked to the booking desk, then returned to a nearby seating area to grab his shoes when a sheriff's deputy stopped him.

As seen in surveillance footage on view below, Marvin responded by swinging his elbow twice in the deputy's direction. That prompted the deputy and three other officers to pile on Marvin, forcing him to the floor. In the minutes that followed, he was handcuffed and placed in a so-called sleeper hold. After receiving a Taser jolt, he died. 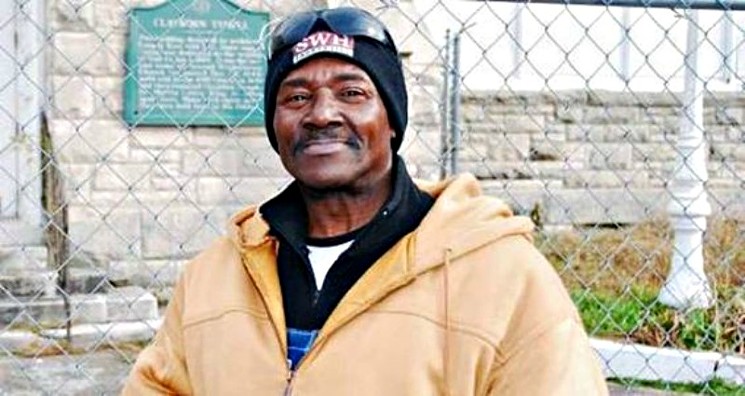 The late Marvin Booker.
File photo
Although the Denver Sheriff Department subsequently banned personnel from using sleeper holds, none of the deputies involved in the incident were criminally charged by then-Denver District Attorney Mitch Morrissey or disciplined at a departmental level over Marvin's death. The lack of action led to a lawsuit and a 2014 trial that led to the aforementioned $6 million settlement. But even after this result, the case continued to draw attention, as witnessed by the release earlier this year of Wade Gardner's searing documentary Marvin Booker Was Murdered.

Reverend Booker notes that the film stirred up concerns about assorted "discrepancies," including questions about the Taser: "There is a section where they ask the city attorney about it, and his response was so insensitive. He said, 'Oh, we had a bad day.' And that just prompted my wife and I to dig deeper."

Their efforts, and those of other supporters, are spelled out in a June 26 article by the Colorado Independent's Susan Greene, who's reported about the case dating back to her days with the Denver Post. Greene wrote that questions about the Taser included:

Why the sergeant, Carrie Rodriguez, went to her office to purportedly lock up the Taser before seeking medical help for Booker, a detour the city’s official report omits.

Why, as Booker was dying, Rodriguez made another trip back to her office to retrieve the Taser, later testifying she thought she might need it for protection against him.

Why she handed in as evidence a Taser that wasn’t deployed the day of the incident.

And why a police detective investigating the case switched that Taser for another that was fired that day but 34 minutes after Rodriguez shocked Booker and for a much shorter time than video and eyewitness evidence suggest.

Reverend Spencer Booker and Gail Booker, right, at a 2011 press conference about the death of Marvin Booker.
Photo by Nick Lucchesi
After the publication of the Colorado Independent piece, the Denver Justice Project and Black Lives Matter 5280 launched a Change.org petition titled "DA Beth McCann: Investigate the Taser That Killed Marvin Booker. Hold Deputies Accountable." At this writing, it's collected more than 800 signatures toward a goal of 1,000.

The Reverend Booker and Gail Booker, joined by Roxy “MaDear” Walton, Marvin’s mother, and sister, Elizabeth Booker-­Bond, will gather at the detention center later today alongside filmmaker Gardner, attorneys Darold Killmer and Mari Newman, and other concerned parties to make the same point.

"They're trying to paint this picture on paper that has so many gaps and holes in it," Gail says. "And a lot of what's written doesn't match what you can see with the naked eye on the video of what happened. That's a problem."

Adds Reverend Booker: "We hope that our coming to Denver will solidify the community in their own efforts to reform some of the patterns and practices of policing in that community — and our hearts go out to the family of Michael Marshall, who are fighting for justice, too. [Marshall died in the jail in November 2015.] But we're also hoping that Beth McCann," who succeeded Morrissey earlier this year, "will take the Marvin Booker case and investigate the illegal coverup we see regarding the Taser, and begin that reform by filing criminal charges against those persons who mishandled or destroyed the Taser."

Here's the surveillance footage of Marvin Booker's death. He is contacted by deputies shortly after the six-minute mark.