Google Maps
One of many new rental-unit properties under construction in Denver.
Although rent prices in Denver have been sky-high in recent years partly because of a severe shortage of available units, that situation may be changing. A new report estimates that more than 13,000 new apartments will open up in Denver over the course of 2017, with the majority of them situated in some of the city's hottest and most rapidly growing areas.

The data was compiled by Rent Café for a post about the nation's hottest rental markets. "The rental boom is not confined to the usual markets of apartment developers such as Miami, Los Angeles and Washington, D.C.," the piece points out. "Benefiting from thriving job markets and substantial growth in high-income jobs, particularly in the tech sector, cities such as Denver and Seattle were bound to see their apartment markets explode. Denver’s multifamily stock will expand by 13,100 new units this year, with Seattle following closely at 10,100 new units."

According to Rent Café communications specialist Andra Hopulele, the precise number of new apartment units being built in Denver this year is 13,142 — an increase of 18 percent over last year.

Moreover, the new builds aren't only situated in Denver proper, as seen in the following Rent Café graphic. Rent Café
Within Denver's city limits, figures provided to Westword by Rent Café break down the apartment total by sub-markets — and they show that more than half of the units are located in the area defined by the Central Business District, Five Points and North Capitol Hill.

The reason more apartments are needed is apparent from other Rent Café stats. From 2015 to 2016, Denver's population increased by 44,261, or an estimated 1.6 percent. During the same period, Denver experienced even more job growth — approximately 2.5 percent. The site estimates an average rent price in May 2017 of $1,453, up 3 percent over the same period a year earlier, and puts occupancy at 95.2 percent across the metro area.

When asked to highlight one of the new projects slated to debut this summer, Hopulele points to Outlook DTC, 5031 South Ulster Street, in the Denver Tech Center area. "The pet-friendly apartments will feature wood-style flooring, quartz countertops and modern finishes, and will offer amenities like resident pub and lounge, a sky deck, a 24-hour fitness center with yoga room, plus a relaxing pool and hot tub," she notes. "The prices listed for this property range from $1,295 for a studio to $2,245 for a two-bed, two-bath apartment home." 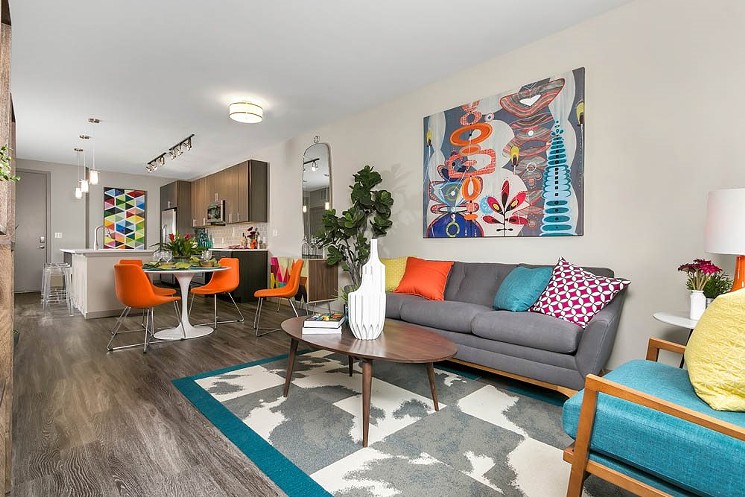 A sample unit at Outlook DTC, scheduled to open this summer.
OutlookDTC.com
There's no guarantee that the availability of more than 13,000 new units will drive down rents in the Denver metro area. Increasing supply will only help if demand is outpaced — and while the fast-paced economy in these parts will eventually slow, there's no sign of that happening yet.