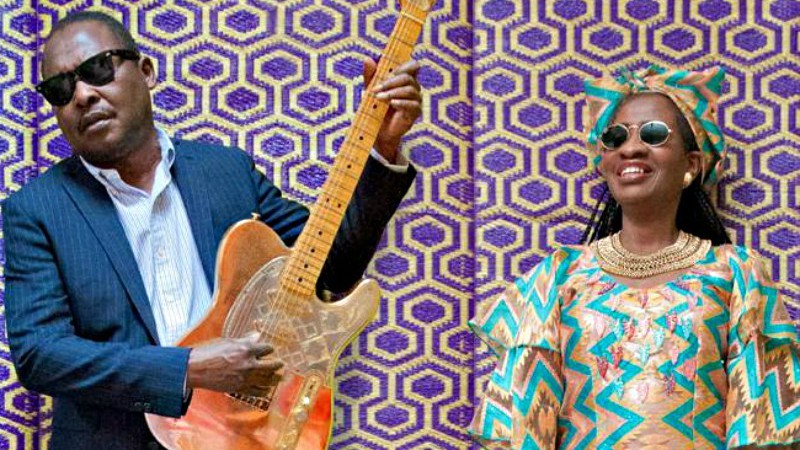 Photo by Hassan Hajjaj
Amadou Bagayoko and Mariam Doumbia in action.
Amadou & Mariam, who headline at the Boulder Theater on July 29, may be the planet's unlikeliest dance music icons: He's 62, she's 58, and they've spent decades as both musical and romantic partners following their 1975 meeting at the Institute for the Young Blind in their native Mali, Africa. But if you can listen to Bofou Safou, a remix-heavy EP released in advance of La Confusion, an album due on September 22, without moving, it's probably because you're distracted by the priest giving you last rites.

There's a good reason that the pair's music is so accessible to Americans and Brits: As noted by Amadou (full name: Amadou Bagayoko) in the following interview, he has a longtime love for the work of rockers, and the feeling's mutual. He and Mariam (Doumbia) have performed and recorded with Pink Floyd's David Gilmour, a personal hero of his, opened for U2 on the band's U2 360 tour, and shared stages with acts such as Coldplay and Blur. And while Amadou's guitar skills are as formidable as Mariam's vocals are infectious, he never lets instrumental fireworks get in the way of the sort of rippling rhythms heard on thrilling albums such as 2008's Grammy-nominated Welcome to Mali.

Our conversation with Amadou was conducted in French with the help of a translator. But his music needs no interpretation. Here's what he had to say.

Westword: I understand that you and Mariam first met at a school for the blind in Mali. What were the circumstances? Were you in a class together? Were you introduced by fellow classmates?

Amadou: When the Institute for the Blind in Mali was created, they made a big radio announcement, and Mariam joined the institute early, before me. I joined two years later. We met basically through our shared passion for music.

At what point did you realize that you were kindred spirits?

When I actually joined the institute, I was already known as a musician. I had music on the radio. When we were introduced, it was through a kind of band, the institute's official band. I was invited to play the guitar and Mariam was invited to sing. That's basically how we began our story together, and we've stuck together ever since.

Mariam takes a break.
Photo by Hassan Hajjaj
Did you know the two of you had a special musical connection the first time you performed together?

When did you decide to create your own group outside the institute? And did you immediately begin performing your own songs, or did you mainly use other material?

When we started playing with the institute, we played for quite a few shows, and everyone really liked our performances, our guitar and vocals. We played many shows at the institute together. This was in the }80s. Very early on, we started playing our own material, but after a while, we instituted covers by artists that we liked, such as Pink Floyd. That's how we began to blend traditional Mali music with the music of other international artists.

When you started to blend in other styles from artists around the world, did you also start thinking about taking your music outside Mali and touring internationally?

In our music, we are inspired by blues, rock and these types of things. We didn't adapt our music to these genres, but we were trying to find a link between those genres — blues, rock — and traditional Mali music. When we started doing that, people began saying this had potential far outside Mali, outside of Africa. It had international potential. It didn't necessarily come from us in the beginning. It was the sound we found that brought other people to say, "Oh, you could look outside and look toward international success."

Were you surprised in the beginning by how many people in Europe and the United States responded to your work?

Yes, we were surprised. We expected people to like our music, to enjoy our music. But the instant success it had definitely surprised us, and we felt rewarded by how people reacted to our music.

You've become a favorite act of some very big rock bands, including U2, Coldplay and Blur. How familiar with these groups were you before you had the opportunity to perform and sometimes even collaborate with them?

Initially, we listened to a lot of music, but our references were more Led Zeppelin, AC/DC, Bad Company, Pink Floyd. These were the types of things we listened to in Africa, and we were much more influenced by rock and blues. But we also listened to U2 — and U2 were really great supporters of our music. They really liked our music, and they contributed to helping us to become well known around the world.

Another angle on Amadou & Mariam.
Photo by Hassan Hajjaj
Given how much you loved Pink Floyd, what was it like recording with David Gilmour?

When I got to play with David Gilmour, I couldn't even imagine that such a thing could happen. I was completely amazed. And everyone we've had the opportunity to work with, these people that we've admired, all of this has made us very happy, and we're quite amazed by it, by all these collaborations.

You've frequently collaborated with artists who don't specialize in the type of music you make. But do you generally find common ground with them even though their backgrounds are very different?

There wasn't any problems in these collaborations. Even if the other artists weren't specialized in our music, we were actually specialized in their music. So we actually found common ground quite easily.

Does that philosophy apply more broadly? That if people from different backgrounds come together and collaborate, they're capable of creating something that everyone can feel good about?

From a musical perspective, it depends on the two parties and who does what. In our case, we were familiar with the other parties' material, their style, so it adapted very well. So it depends on the actual people who are in this understanding. Basically, you need someone to be interested in other people's music. But some people don't have any interest in other people's music, so you can't necessarily get to a common ground in that situation.

The new EP features a lot of very danceable remixes, and your music has always been very danceable. Is that one way you know you've created something worthwhile — when it inspires people to get up out of their chairs and move?