Brewers Association
The Brewers Association lobbies Congress every spring for laws that help craft brewers.
Flying Dog Brewery has a long history of fighting censorship — in Colorado, where the brewery was born, in Maryland, where it moved in 2008, and in Michigan, where it has fought a long battle with the state over the right to sell its flagship beer, Raging Bitch Belgian IPA. That anti-establishment attitude is no surprise: The brewery was founded in 1994 by Aspen millionaire entrepreneur George Stranahan, a friend and neighbor of famed gonzo journalist and First Amendment crusader Hunter Thompson. And Flying Dog’s labels use edgy artwork by Ralph Steadman, who illustrated Thompson’s books and hung around with him for years.

But there’s a difference between actually fighting censorship and claiming that you are fighting censorship as a way to justify crass and offensive beer names. You would think that a sophisticated company like Flying Dog — now the 32nd-largest independent craft brewery in the nation — that's run by an experienced professional like Jim Caruso would know the difference. But it looks like that may not be the case.

Last week Flying Dog, which still has administrative operations in Denver despite running its beer-making operation out of Frederick, Maryland, told the beer blog Brewbound that it had terminated its membership in the Brewers Association because of the nonprofit trade group’s April decision to change its advertising and marketing code so that medal-winning breweries won’t be allowed to advertise their award with the BA logo if the name of the winning beer is deemed offensive by a new BA complaint-review committee.

Offensive names “contain sexually explicit, lewd, or demeaning brand names, language, text, graphics, photos, video, or other images that reasonable adult consumers would find inappropriate for consumer products offered to the public,” the new wording reads. The BA will only address a beer name if someone complains.

Flying Dog has always championed First Amendment rights.
Flying Dog Brewery
The BA policy doesn’t ask breweries not to use offensive beer names, nor does it prevent them from entering them in contests like the Great American Beer Festival and the World Beer Cup — which the BA runs — and taking home medals. It only says that the organization, which is based in Boulder, won’t lend its branding to breweries it deems offensive — breweries that often like to add the GABF logo to their labels after winning an award.

“Especially over the last few years, we have been asked about diversity in beer from a growing number of brewery members and beer community stakeholders,” BA craft-beer program director Julia Herz told Westword when the organization announced the new policy. “These are new uncharted waters…. As businesses, brewers can and should name and market beers in the manner they desire, and beer lovers can support any brands they choose. However, the BA also believes that beer marketing should represent the values, ideals and integrity of a diverse culture.”

The BA has yet to single out a brewery for an offensive name — and a representative of the organization said it had no issue with Flying Dog’s own beer labels, which have certainly offended some people. Most are dog-related puns, like Raging Bitch and Doggie Style Pale Ale, or just vague sexual references, like Pearl Necklace Chesapeake Stout, with dog-themed label art.

But Caruso and Flying Dog are the ones who are offended now. “This sort of policy is nothing more than a thinly veiled side door to censorship,” Caruso told Brewbound. “It’s anti-free enterprise. It’s interfering with their competitors’ business. It’s thinking for consumers. Americans hate thought police, and they hate censorship.”

This is an example of the kind of label that the BA probably wouldn't lend its logo to.
Route 2 Brews
Flying Dog certainly does. In 1995, the Colorado Liquor Board banned Flying Dog's tag line "Good Beer, No Shit," which was created by Steadman, from labels. After a five-year fight and assistance from the ACLU, Flying Dog was allowed to use the phrase (during that intervening period, the label read "Good Beer, No Censorship”). In 2007, the State of Arkansas rejected Flying Dog’s In Heat Wheat, and in 2009, the Michigan Liquor Control Commission denied Flying Dog’s Raging Bitch label; the brewery subsequently won a monetary award when it sued the state.

All of these were clear-cut attempts by government agencies to limit freedom of speech, and the legal fights were well worth the money the brewery spent on First Amendment lawyers.

The BA situation is different. Caruso told Brewbound that the organization's policy is “nothing more than attempting to bully and intimidate craft brewers into self-censorship,” which he described as “a particularly vicious tyranny of silence because people tend to over-censor.” He added that the policy creates a “chilling effect” on speech.

He also called the BA’s complaint-review committee a “creepy” tribunal. And he has a point there; the policy, while well-meaning, is full of potential holes and definitely sets the organization up for accusations of overstepping its bounds, creating double standards and biting off more than it can chew. 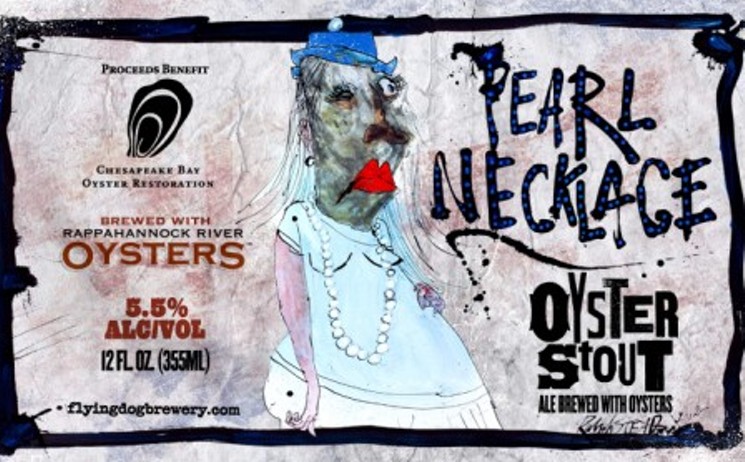 Flying Dog's labels, with art by Ralph Steadman, aren't the issue here, despite their sexual innuendo.
Flying Dog Brewery
But in the end, the BA isn’t censoring anyone or threatening anyone’s First Amendment rights (rights that are very important to journalists, by the way). It is simply taking a stand on an issue that is just as prevalent in craft brewing as it is in the rest of society: casual sexism, racism and homophobia disguised as fun-loving or irreverent joking by people who claim that anyone who objects to their “fun” is a politically-correct snowflake, and worthy of even more derision. It’s a particularly effective and brutal form of bullying.

In effect, Flying Dog is choosing to support breweries that use beer names and labels to belittle people rather than standing with the BA, which fights to support the large majority of their brethren in the independent craft-brewing industry and community. It's also electing to alienate many people who work in the industry.

The Brewers Association isn’t perfect by any means. In fact, the organization often struggles to keep up with current subjects and trends, and has had a hard time trying to represent all of its members all of the time. But it does represent a community — one that is trying to do business in a different way than other industries have done it in the past. Being a part of that community is important, even if Flying Dog objects to a policy.

It might have made more sense for the brewery to lobby for a spot on the “creepy” tribunal. It might have been more effective if the brewery had created five new beers with offensive names, then entered them into the GABF to see if they could win — and then fought the battle from there.

But to claim that the BA’s policy, which was designed to encourage tolerance and encourage people to grow up a little, is somehow equivalent to burning books or “thought police” is the same kind of argument that people make when they say women shouldn’t wear scanty clothing if they don’t want to get raped.

It protects the bullies at the expense of the bullied. And it proves the very point that the BA was trying to make with its new set of guidelines.