Colorado's Candy Man on His Invite to the Trump White House

Fox News screen capture
Rick Enstrom, left, at the Small Business Administration event at the White House yesterday.
What's it like to be summoned to the White House? For Rick Enstrom, a longtime figure in Colorado Republican politics, an invitation to attend an August 1 forum about small businesses such as Enstrom Candies, the longtime Colorado enterprise he helps run, was an opportunity to get another angle on the administration of President Donald Trump — one that doesn't have anything to do with investigations into possible collusion with Russia or the other assorted controversies that have dominated coverage by most major media outlets other than Fox News, which caught Enstrom on camera at the event.

"Unfortunately, that's the environment the White House operates in right now," says Enstrom, who (disclosure) happens to be a friend of yours truly. "Some of it's earned, but I do think we're going to see a change in demeanor" thanks to the appointment of new chief of staff General John Kelly, who attended the forum along with big names such as presidential daughter and adviser Ivanka Trump, fiery counselor Kellyanne Conway, U.S. Small Business Association head (and former World Wrestling Entertainment CEO) Linda McMahon and the president himself, who offered welcoming remarks.

This isn't Enstrom's first brush with an American chief executive. "I got to introduce Ronald Reagan at a deal when I was a Mesa County commissioner and he was running for president," he notes. "I was the youngest commissioner ever elected in Colorado, and I got up on the stage and locked up. I said, 'Honest to God, I can't think of a single thing to say. Here's the next president of the United States, Ronald Reagan.'"

Laughing, Enstrom adds, "That was probably the best speech I ever gave" — and Reagan apparently liked it, too. After the Gipper's election, Enstrom managed to wrangle a White House tour that included a stop by the Oval Office. Along the way, he admits, "I swiped a drink coaster — but it was paper." 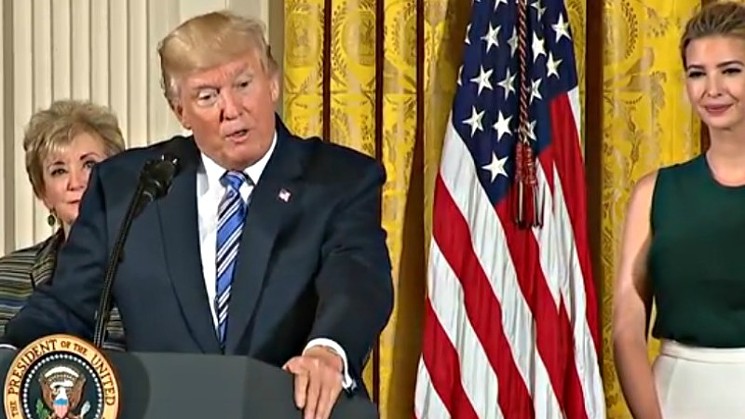 President Donald Trump with daughter Ivanka Trump and SBA administrator Linda McMahon at the White House's small-business event.
White House via YouTube
During the 2016 electoral cycle, he goes on, "I became a Trump guy when it was Donald Trump or the other candidate" — Hillary Clinton, aka She Who Shall Not Be Named. "I mostly worked with Donald Trump Jr. in the Sportsmen for Trump arena, holding rallies in rural Colorado and along the Front Range. He's a sportsman and I'm a sportsman; we met socially through the One Shot Antelope Hunt, which is sponsored by the governors of Wyoming and Colorado."

Nonetheless, Enstrom was surprised late this past Friday night, July 28, "when I got an e-mail from the White House social office saying, 'The president requests the pleasure of your company' at this event — with only three days' notice. Thank God for Southwest Airlines and their whole I-want-to-get-away thing, because I picked up a great deal."

He arrived in Washington, D.C., on Monday the 31st, and at two p.m. the following day, he was being given the thrice-over. "Man, they've got some security at that place. I had to go through three security checkpoints."

An hour later, President Trump arrived and greeted the assembled group; Enstrom guesses that there were fifty or so business reps from around the country and a similar number of White House and SBA staffers and the like. Then he handed off to Ivanka, who joined with McMahon to offer a series of attaboys. In Enstrom's view, the event "was just to let business in the U.S. know that they support them and understand that small business is the foundation of the Great American Dream."

Ivanka split as soon as the event was over, but Enstrom got to chat one-on-one with McMahon, whom he describes as "awesome and smart as hell — and she made a couple of great points. She said, 'People don't remember how you got knocked down, but they remember how you got back up' — and in small business, that's the take-home message. Things don't always run like a finely tuned Swiss watch; it's a learning process, and you have to learn from those stumbles. That's the entrepreneurial spirit. But she also talked about social responsibility in small business — about how we have a responsibility to take care of employees and take care of your community." 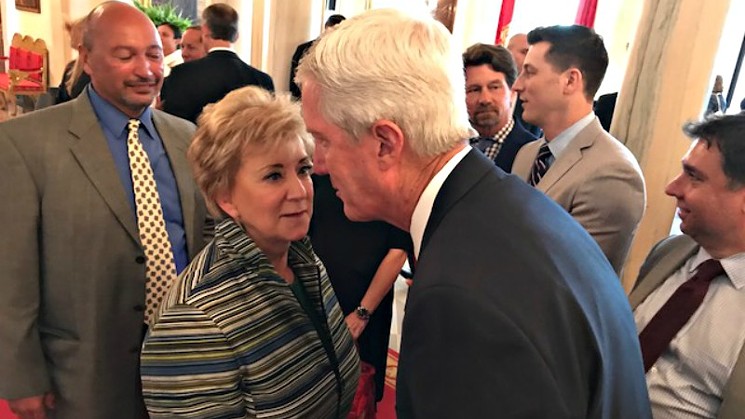 Rick Enstrom chats with Linda McMahon, administrator of the U.S. Small Business Administration (SBA).
Courtesy of Rick Enstrom
Along those lines, Enstrom has been taking advantage of his trip to Washington to jaw with Colorado politicians. Yesterday he met with Senator Cory Gardner, a fellow Republican, and today he's scheduled to get together with Democratic Senator Michael Bennet. On top of that, he and another Colorado attendee, Jerry Natividad, the founder and CEO of American Facility Services (and nearly a Senate candidate last year), encountered a more notorious figure: Anthony Scaramucci, nicknamed "The Mooch," who was fired as White House communications director just ten days into the gig after giving an interview in which he said that unlike chief strategist Steve Bannon, he wasn't "trying to suck [his] own cock."

Enstrom is considerably more modest when he talks about his White House experience. "It's a tremendous honor to represent family businesses and small businesses in Colorado," he says.

Even if the only people who saw him there are Fox News viewers.