Somebody Stole Artist Kristin Stransky's Artworks. She Wants to Know Who

Kristin Stransky
Kristin Stransky, "The Evolution of Handwork." This piece was damaged during a burglary at CSU's Electronic Art Gallery.
Denver new-media artist Kristin Stransky’s FabLink 3-D-printed dress required ten pounds of nylon fiber, more than 800 hours of 3-D printing time, and 150 to 200 hours of assembly and fabrication time to make. The dress was assembled from hundreds of tiny links, each link hooked to the others by twelve even tinier rings. Stransky says it takes twenty to thirty hours to print every fifty links and an hour to print fifty rings. You see where this is going.

The dress, a one-of-a-kind wearable work of art, took about two years to complete before Daisy McGowan, director of the Galleries of Contemporary Art at the University of Colorado Colorado Springs, donned it at GOCA’s annual Brilliant fundraiser in 2016. McGowan herself had put in hours sitting for fittings, as the dress was built around her link by link. 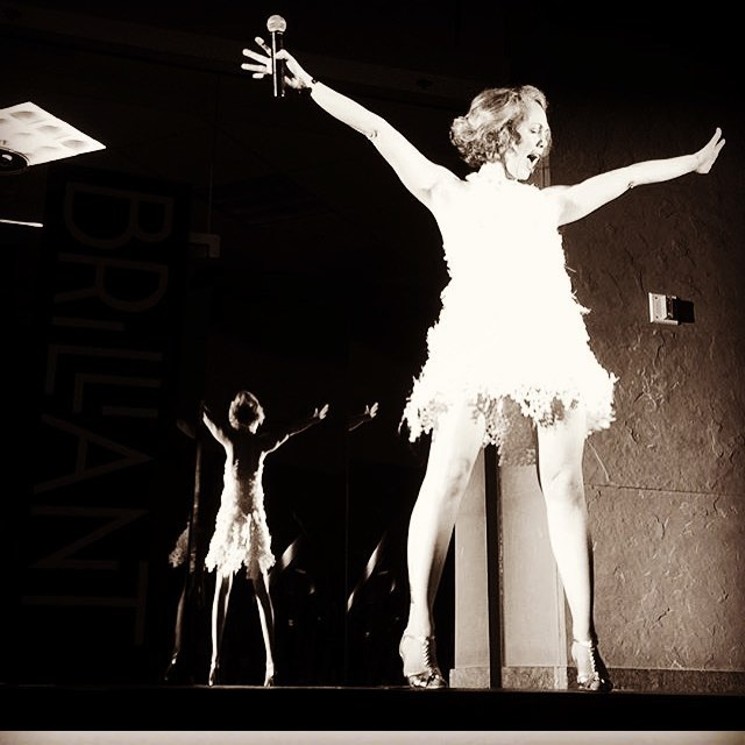 Have you seen this dress? Artist Kristin Stransky needs your help finding it.
GOCA UCCS
Last week, while on view in an exhibit at the Electronic Art Gallery at Colorado State University in Fort Collins, the dress disappeared overnight from the gallery, along with several other irreplaceable 3-D-printed works by Stransky.

Kristin Stransky
Stransky, an adjunct professor in Emergent Digital Practices at the University of Denver, says the loss of these pieces takes her back to step one in terms of establishing herself as an artist. The missing pieces include the dress, two interactive “Notion Motions” with lights that react to gestures (a necklace and a vest), a delicate necklace from her Statement jewelry collection, a length of interactive 3-D printed cloth, and a pair of hands that were ripped from an installation titled "The Evolution of Handwork," destroying the overall work. And while their monetary value isn’t important to Stransky, they are priceless to her personally in terms of establishing her name in the art world.

Kristin Stransky
“I'm grasping at straws here, and need to get word out about my stolen artwork,” Stransky — who considers herself an emerging artist whose career depends on a strong portfolio — says, still reeling from the shock. “I’m already trying to figure out how to remake the pieces, but am still hoping I can get them back. That’s probably not going to happen, but it’s worth a shot. I’m just hoping they didn't trash them.” It’s something she wasn’t even remotely prepared to face: “Who has a show at a major university and then has their artwork stolen?”

Kristin Stransky
At the moment, that’s an unknown. Stransky says a key to the locked gallery, available only to a limited number of known entities, was also found missing from its lockbox after the burglary, and while a police investigation is under way, she’s uncertain why anyone would take her artwork. One surmisal is that it was “borrowed” by someone in the local rave culture, where wearable interactive gear would be a sought-after commodity.

Kristin Stransky
In the meantime, Stransky just wants to send out a public plea and hopes sharp-eyed individuals along the Front Range will keep an eye out for the missing artworks. If you know something, e-mail Stransky with tips and information at [email protected] or contact CSU police officer Stephen Gurian at 970-491-6425.