Fourteen Denver Museums and Galleries Everyone Should Visit

From massive arts institutions to high-end commercial galleries and DIY spaces, Denver boasts an array of venues showcasing first-rate art. Some are worth visiting for the openings alone, some are particularly kid-friendly, and still others are simply must-see spots for visitors to the Mile High City. Before the summer ends, be sure to stop by these fourteen favorite places to see art in town, as highlighted in the Best of Denver 2017.

At Dateline, artist Eric Shumake exhibited his paintings of bridges over Cherry Creek, a subtle critique of the City of Denver's homeless sweeps.
Courtesy of Eric Shumake
Best Art Gallery Openings
Dateline
3004 Larimer Street
The tiny, artist-run Dateline has built a big reputation among both underground- and commercial-art lovers for putting on risky exhibitions that showcase works by a diverse array of Denver artists. The shows themselves provide plenty of food for thought, but gallerist Jeromie Lawrence Dorrance ups the ante with openings stocked with actual food and drink, often thematically tied to the art on display. The party atmosphere and the gallery’s location in the heart of RiNo make those openings a big draw for artists and fans alike, an ideal place to shmooze about booms and busts in Denver’s art world. Don’t forget to look at the exhibit while you’re there! 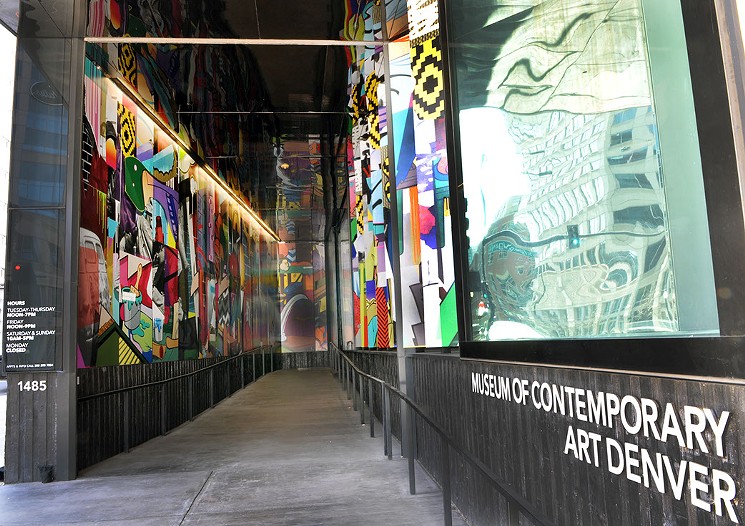 MCA Denver
Best Place to Party While Taking in Art Shows
MCA Denver
1485 Delgany Street
303-298-7554
The people behind MCA Denver know that to survive as an arts institution, you have to attract a broad array of patrons — and keep them coming back again and again. And so at regular intervals, MCA Denver turns into one of the city’s hottest clubs, luring people in with karaoke nights, House of Style cocktail parties, performances by musical acts and much, much more. The price of admission includes entry into the galleries, and some of the youthful partiers actually wander back to see what’s on display. Right now a trio of shows lets Denver’s twenty-somethings travel back in time to see what twenty-somethings from past generations were up to: New York in the ’60s and ’70s is highlighted in Wall Writers, in the ’70s and ’80s by Basquiat Before Basquiat, and in the ’90s by Ryan McGinley. MCA Denver has made its mark on the city not just with smart exhibits, but with smart marketing...and great parties. 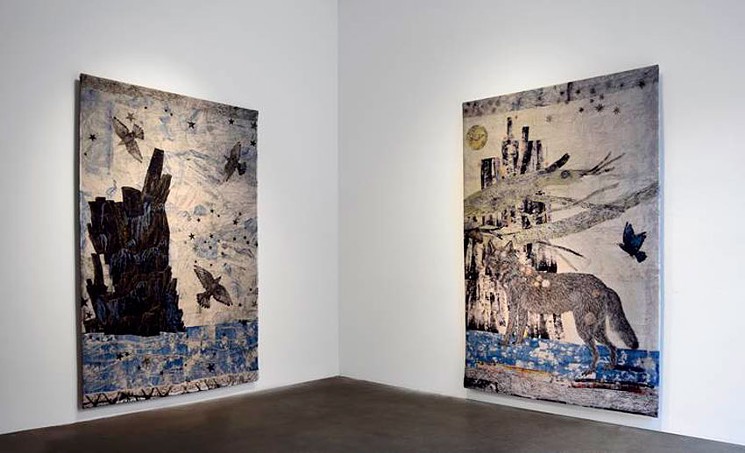 "Harbor," left, and "Cathedral," by Kiki Smith, cotton jacquard tapestry.
Robischon Gallery
Best Gallery for Established Artists
Robischon Gallery
1740 Wazee Street
303-298-7788
Robischon Gallery, a LoDo landmark for decades, is the city’s flagship contemporary gallery — not just because the place approximates the size of a small museum, but also because so many of the artists whose work is shown there also exhibit in actual museums. Figures from art-history books like John Buck, Ann Hamilton, Manuel Neri, Judy Pfaff, Kiki Smith, Bernar Venet and others are represented by the gallery, and if you want a Christo or an Ellsworth Kelly, for example, Robischon can get that for you, too. The gallery has also assembled a roster of some top local talent — Kim Dickey, Ana Maria Hernando, Trine Bumiller, Gary Emrich, Terry Maker, David Sharpe and many, many others — and their works often wind up in museums as well. Another thing that sets Robischon apart is how elegantly and intelligently every exhibition, regardless of the theme or topic, is installed; credit for that goes to Jennifer Doran, who along with husband Jim Robischon selects the first-rate work by first-rate artists that the gallery displays. Left to right: Joseph Coniff’s “Including Yellow” and “Four Flowers (in greater detail)”, acrylic and enamel on canvas.
Courtesy of Rule Gallery
Best Gallery for New Artists
Rule Gallery
530 Santa Fe Drive
303-800-6776
Just about everybody in the art world is interested in the next big thing to emerge on the contemporary scene, which is why a number of galleries offer the work of newer — read: younger — artists. A lot of young artists have come through Rule over the years, often freshly minted BFAs, and twenty- and thirty-somethings are still over-represented in the gallery’s stable. Co-directors Valerie Santerli and Rachel Beitz are always scouting local talent: If someone’s about to get hot, Rule will be among the first to get there.

Best Museum for Out-of-Towners
Clyfford Still Museum
1250 Bannock Street
720-354-4880
Abstract-expressionist giant Clyfford Still had only the most casual association with Colorado, having briefly acted as a visiting artist at the University of Colorado Boulder. But a huge hunk of his life’s work is right here in Denver, at the Clyfford Still Museum. So how did it wind up here? When he died, Still left a stipulation in his will that any American city that would build a museum to house his pieces exclusively could get his enormously valuable collection of work. In 2004, then-mayor John Hickenlooper worked out an agreement with Still’s widow, Patricia Still, pledging to build such a museum; the next year, she threw her own hoard of her husband’s work into the deal. As a result, the CSM contains 95 percent of the artist’s output. If you want to see Clyfford Still’s work, you need to come to this museum — and people from around the world do. If you have friends from out of town already visiting, take them to see something they won’t find anywhere else on earth.

Best Place to Buy Affordable Art
Spark and CORE Galleries
900 Santa Fe Drive
Spark: 720-889-2200
CORE: 303-297-8428
Since artist cooperatives don’t charge commission on sales, they’re good spots for finding affordable art, because you’re starting with what amounts to a 50 percent break over commercial galleries. But times have gotten tough for this city’s alternative spaces, so the cash-conscious collector has fewer options. That makes Spark and CORE, two co-ops that have long shared an address, real standouts. The artists at Spark, the city’s oldest arts co-op, are more established than those at CORE, so the prices are usually a little higher. But you can still find bargains at both spots, with small- to mid-sized paintings, prints and photos sometimes for sale for as little as $100 each — and rarely is anything over a couple thousand dollars. As you contemplate the price tag, remember: Not only will you be buying a bargain to hang over the sofa, but you’ll be helping out Denver’s beleaguered DIY culture. Now go buy another piece or two. Works by Sharon Meriash, from Fabricating Nature.
William Havu Gallery
Best Gallery for Contemporary Art of the Region
William Havu Gallery
1040 Cherokee Street
303-893-2360
Bill Havu, whose namesake William Havu Gallery is one of the top art venues in town, focuses on work by artists living in this part of the country — not just Colorado, but also New Mexico, Arizona, California, Texas, Wyoming and even such unexpected places as Nebraska and Kansas. While all of the artists are from the West, the work Havu selects reflects international trends in contemporary art, though often with a distinct cultural tweak reflecting the region. Artists represented by Havu are typically mid-career, with substantial talents, including Amy Metier, Emilio Lobato, Virgil Ortiz, Nancy Lovendahl and Tony Ortega. A lot of people have the idea that art made by people living in this part of the country will be filled with kitsch depictions of cowboys, Indians, horses, buffaloes and coyotes; one visit to William Havu Gallery will dispel that false impression once and for all.