Ten Things You Need to Know About the National Poetry Slam

Adam Rubinstein
Mid-performance at National Poetry Slam 2016.
At least 400 poets have descended on Denver, heads full of memorized verses, for the National Poetry Slam. In 2015, Denver was announced as one of four anchor cities for the poetry competition, meaning that the event will cycle back through in 2022. For those who can't distinguish a slam poem from a verbal fistfight or the recitation of iambic pentameter, or simply readers curious about what to expect, Westword got on the phone with National Poetry Slam Executive Director Suzi Q. Smith and her right-hand woman in planning the event, local poetry and art advocate Danielle Brooks, to demystify slam poetry. Here are ten pointers for this year's National Poetry Slam.

A poetry slam is not a Whitman aficionado's equivalent of a rap battle.
Smith describes the National Poetry slam as "basically the performance-poetry Olympics," but that doesn't mean it's aggressive. Slam poetry evolved in the 1980s in Chicago, and it's a broad category that encapsulates any sort of original poetry performed at a slam. In Brooks's words, slam's "the art of competing with your original spoken-word performance poetry." Judges at the 2016 National Poetry Slam hold up drastically different scores.
Adam Rubinstein
You — yes, you — could be a judge.
Since slam is a contest, that means that each piece receives a numerical score determined by five random audience members (who aren't allowed to directly engage with the performers otherwise). Because judges could have hypothetically wandered into the slam to take shelter from the rain or because they were lost on their way to the Paramount (though in this case, the finals are ticketed), the idea is that it's not the most smooth enjambment or cleverest rhyming that necessarily wins: it's how the poem's performance affects the audience. A team competes in the finals of the 2016 National Poetry Slam.
Adam Rubinstein
This isn't the WASP-y poetry you read in high school English class.
Slam and spoken-word poetry are vulnerable, often centering around personal experience, with heavy doses of social justice and also humor (the winners of the biggest teen slam, Brave New Voices, won with "Ode to Soulja Boy"). The art form "gives people with a message a platform," says Brooks. Unlike the traditional poetry establishment, with its chapbooks and ladder of prestigious journals, slam has no gatekeepers, which Smith think results in poets with more marginalized identities having the chance to share their stories. Across the board, those who participate in slam poetry have "a very intense need to say something and feel heard and seen," she says. 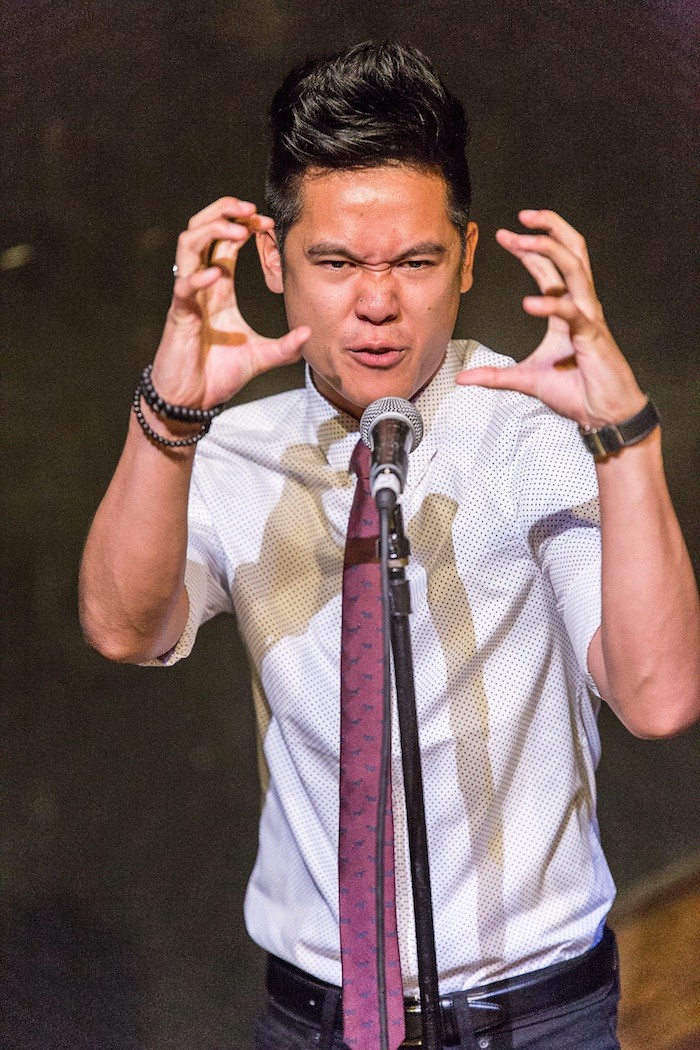 A slam poet performs at the 2015 National Poetry Slam in Oakland.
Adam Rubinstein
"No gatekeepers" doesn't mean these poets aren't brilliant at what they do.
This isn't an open mic where you can stroll in seven minutes late, order a cafe au lait and then read a poem off your phone. Nor is it an elite clique where performers gain metaphorical slam-poetry varsity jackets that guarantee eternal entry to this slam stage. You have to compete to reach the National Poetry Slam on the local circuit all year, scoring high in various slams in your city before becoming one of the representatives on that city's team. Most of the performers at National Poetry Slam have received payment for their performances, although a smaller fraction (maybe a fifth, estimates Smith) exclusively focus on poetry as their day jobs. So expect to see writers pacing the sidewalks, whispering lines under their breath as they rehearse, one last time, gearing up for a performance they've been working toward all year.

The finals at Agnes Scott College in Decatur, Georgia, last year.
Adam Rubenstein
The pool is international this year.
Eighty teams will take the stage, including those from Australia (is it bad to score based on accents alone?) and Canada. Each team of five may include alternates, who sub in when the demands of traveling or performing prevent a higher-scoring poet from attending.