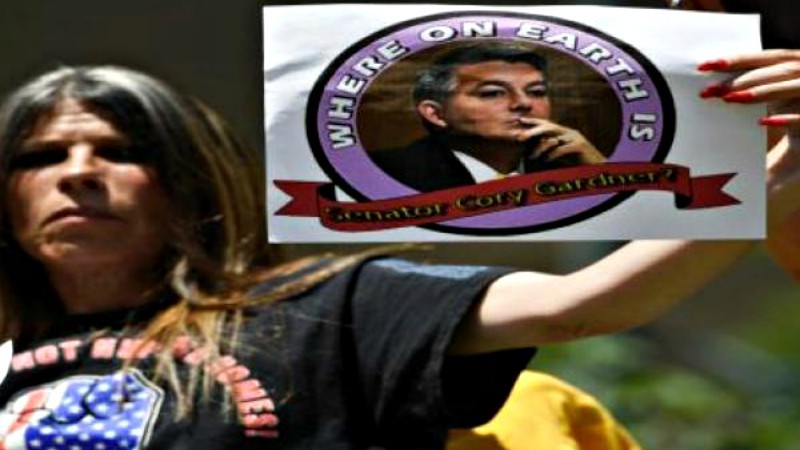 CCDonline.org
Dawn Russell's case involving a January protest against Senator Cory Gardner was dismissed.
Charges against Dawn Russell and Elizabeth Moseley in relation to an ADAPT protest of Senator Cory Gardner in January have been dismissed. This decision, which came down on the same day that cases against five Democratic Socialists of America members who demonstrated against the senator at a July sit-in were also tossed (at Gardner's request), helps explain why the senator recently relocated his offices from the Chase Bank building, a commercial enterprise, to a federal building.

"These things absolutely contributed to that move," maintains attorney David Lane, who represented Russell and Moseley.

The details of the January protest are contained within the Russell and Moseley dismissal order, accessible below. As the document notes, the first ADAPT case, which preceded one in June involving Wheelchair Sports Camp's Kayln Heffernan that's still working its way through the legal system, focused on a group of protesters who arrived at the Chase Bank building with the goal of visiting Gardner's office, on the fifth floor of the structure, and demanding that he not vote to repeal the Affordable Care Act, aka Obamacare. However, building management prevented them from doing so, and when the activists, many of them disabled, refused to vacate the premises, they were cited for trespassing.

"There were eighteen protesters at the first protest who got arrested," Lane points out. "Most everybody else had taken deals, but not Dawn and Elizabeth, who filed a motion that they had a First Amendment right to petition their government for redress of grievances — and they argued that the Chase Bank people don't have any right to stop people from petitioning Cory Gardner's office by shutting down the elevators and ordering them out of the building."

In ruling on behalf of Russell and Moseley, Denver County Court Judge Clarisse Gonzales relied on a case titled Bock v. Westminster Mall, which Lane describes like so: "In Bock, the Colorado Supreme Court said that even though the Westminster Mall was private property, it functioned as the equivalent of a town square back in the day — and in places like that, you get First Amendment protection even though it's private property." 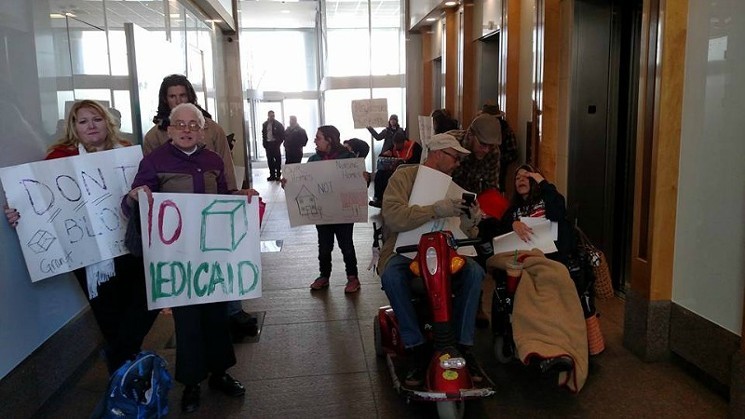 Disability-rights protesters who were cited for trespassing during a demonstration in January.
Photo courtesy of Jeff Hart
In essence, Lane continues, "the Colorado constitution gives you greater First Amendment protection than the U.S. Constitution — and the judge said that was the case with Cory Garder's office at the Chase Bank building. If a senator chooses to have an office in a private building, then the Chase Bank people have to afford the same protections as if it was a public building. And because the protesters had a state right to petition Cory Gardner for redress of grievances, she dismissed all charges."

This victory stands in contrast to the outcome for Shannon Secrest, another demonstrator at the January ADAPT protest. Secrest, who was represented by attorney Eric Klein, went before a different judge, Adam Espinosa, and Lane says, "Not only didn't he dismiss the case, but they held a trial and she got convicted and sentenced for doing the exact same things Dawn Russell was doing — and her case was dismissed. So we're getting inconsistent results from different judges."

Nonetheless, Gardner appears to be taking no chances. On August 7, his office officially opened for business at the U.S. Customs House, at 721 19th Street, Suite 150. "This is a temporary space and Gardner’s office will be announcing a permanent location at a later date," pointed out a Gardner release, which quoted the senator as saying, "The most important part of my job is to do everything I can to best serve my constituents, and the new space that we will be moving to will allow that to continue. I always encourage Coloradans to visit my office when seeking assistance with any issues with the federal government or just to stop by and say hello."

This welcoming tone stands in contrast to the treatment of protesters such as Russell and Moseley. "I think Cory Gardner doesn't want to be bothered with these protesters," Lane allows, "and now that he's in a federal building subject to federal control, that pesky little state constitution won't interfere with his ability to block protesters."

Click to read the order in regard to the City and County of Denver v. Russell et. al.