Jon Solomon
Herbie Hancock performing at Denver Botanic Gardens on Monday night.
There was a woman sitting on her four-wheeled walker near the soundboard for most of Herbie Hancock’s two-hour set Monday night at the Denver Botanic Gardens. She seemed to be digging the show. When keytar-wielding Hancock and crew launched into the super-funky “Chameleon” for the encore, she stood up and rolled her walker down the aisle, maybe twenty feet from the stage, and started taking photos.

Meanwhile, pretty much everyone else rose from their lawn seats or off their blankets and stood up, while some people ran down to the front of the stage. It was like a switch was flipped, and all of a sudden, it was a funk dance party. Sure, the 77-year-old Hancock (who looks like he’s 57) is one of the great jazz pianists of all time, but the guy clearly knows how to bring the funk with some help from master drummer Vinny Colaiuta, who also tours with Sting, and bassist James Genus, who’s part of the Saturday Night Live band.

The group had referenced “Chameleon” during the opening cut, “Overture,” which started out spacey and abstract before morphing into a funk groove that sounded like it could have been an outtake from Hancock’s 1973 jazz-funk masterpiece Headhunters and then going into a few other directions over the course of about 25 minutes.

“Ready to get your ear bent out of shape?” Hancock asked the crowd. “You won’t even recognize your ears.”

“Overture” had already done that with all its twists and turns and moods, but Hancock was referring to guitarist Lionel Loueke, who had already done some ear-bending of his own and was about to do more. He was playing a guitar, but what came out sounded more like a synthesizer.

“I think it’s got a lot of other people in there,” Hancock joked just before putting his face closer to the body of Loueke’s guitar. “I see some feet! There’s some feet. He’s got a whole team inside. Actually, he’s the only person in the world who can play guitar like that.” 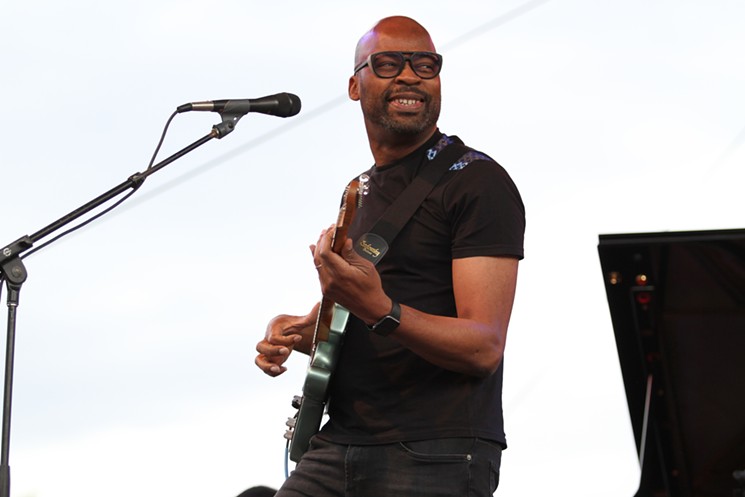 Lionel Loueke
Jon Solomon
Hancock had a point. Loueke’s percussive right-hand technique was more akin to that of a funk bassist, and his guitar sounded like a synth for a good part of the show – except during his solo on “Cantaloupe Island,” one of Hancock’s most enduring hits. And as Hancock pointed out, bass players are down around the bottom most of the time, but Genus is all over the bass, like every part of the range.

“This is very demanding music,” Hancock said. “It’s pretty out there. It goes from one thing to outer space, then it’s down in the gutter, you know, some funky...can’t get funkier than that. He does it all. Every bit of it. No matter what it calls for. That's why musicians all over the world, you know, bandleaders, they always want to hire him. Guess where he is today? He’s playing for you. Right here in Denver. He’s the guy that everybody wants and few are able to get.”

In addition to “Chameleon,” the band dug into other ’70s material, like the funky “Actual Proof” and the R&B-steeped “Coming Running to Me,” which featured dual vocoders from Hancock and multi-instrumentalist Terrace Martin, who is producing Hancock’s forthcoming album and helmed Kendrick Lamar’s To Pimp a Butterfly.

While “Chameleon” might have been the tune to get everyone on their feet, “Cantaloupe Island” was sure pushing them in that direction. And as one guy on his phone pointed out on the way out after the show, “Man, it’s not often that you get to see Herbie play a keytar on a Monday night.”