Ska Brewing
The year was 2014. The sun was shining, the flowers were blooming, and Ska Brewing was getting ready to introduce a new year-round beer, Rudie Session Ale, a 4.5 percent ABV IPA made with Galaxy and El Dorado hops. Rudie — which Ska tagged with the line "Rudie can't fail," from a Clash song of the same name — was right on trend: Breweries across the country were scrambling to produce lower-alcohol, full-flavor beers that were suddenly in high demand. "We wanted to brew an aggressively hopped beer that you can drink a few of and still hold your shit together," Ska co-founder Dave Thibodeau wrote about the beer at the time.

Fast-forward to 2017. "We tagged it 'Rudie can't fail,' and of course, Rudie is failing," Thibodeau says now.

Although the beer tasted good, it hasn't been a big seller. And while Ska could just move on, there's one little problem: Like many other breweries, Ska had locked itself into a five-year contract with its hops suppliers — so those Galaxy and El Dorado hops just keep coming in the mail even though the brewery doesn't need them.

"Once again, we did something stupid. I guess we're a little bit known for that," says Thibodeau with the same self-deprecating humor that Ska unapologetically — make that apologetically — uses in its public persona. "It was a bad hop contract. But this is not on the hops suppliers. It's all on us. It's our own damn fault."

But Ska isn't alone. Far from it. Dozens and dozens of breweries across the country signed long-term contracts back when sales were growing by double digits every year and they wanted to make sure they had the supplies they would need in coming years. "After the big hops shortages in 2010 and 2011, we were a little afraid that we weren't going to be able to get the hops we needed in the future," Thibodeau says. "So we did it."

But then two things happened.

The first was a slowing in the market for craft beer, which has meant fewer sales for many medium-sized and larger craft brewers; in Colorado, Ska, Great Divide, New Belgium, Avery and Left Hand, among others, reported slowing, flat or declining sales in 2016. The other change was that certain hops varieties went out of vogue, or became less fashionable, while others came into style and are now in high demand. 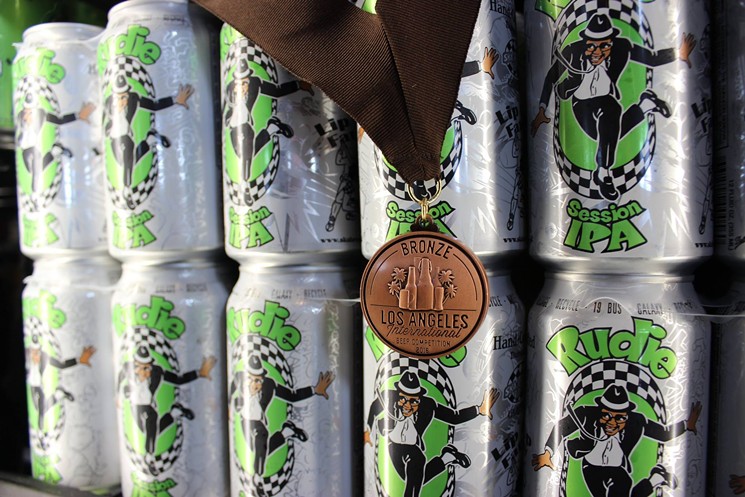 Rudie Session IPA tasted good, but it didn't sell well.
Ska Brewing
As a result, many breweries have been selling or giving away vast quantities of hops in the past year, including New Belgium, Avery, Great Divide, Crooked Stave and many more.

Ska came up with a different tact. "We were sitting around talking about how we couldn't be the only brewery that had signed too many long-term hop contracts... Then [Ska sales manager] Arlo [Grammatica] suggests that we make a beer called Bad Hop Contract and use all of those hops," Thibodeau explains with a laugh.

Since breweries have also started using more acronyms in their beer labels — DIPA, 2XIPA, 3XIPA, etc. — they decided to throw that into the mix. "Too many hops, too many acronyms," Thibodeau says.

BHC DIPA will boast an 8 percent ABV and lots and lots of Galaxy and El Dorado hops when it hits shelves in six-packs on October 1; the brewery will offer a sneak peek on September 9 at its 22nd-anniversary party in Durango. The label features a picture of a skeleton hand signing off on the hops contract. In Ska Brewing's legend and lore, which includes a variety of comic book-like stories, characters and artwork, the hand belongs to Pinstripe, a villain, the Chief of Conglomeration, who is to blame for anything bad that happens to the brewery. "In our world, everything that goes wrong is because of him. He is behind everything that brings us down," Thibodeau says.

Thibodeau likes it a lot, saying, "I'm really proud of this one. It's fairly balanced, hoppy but not too bitter. It has more of a soft mouthfeel, like a lot of New England-style IPAs, but it's not cloudy."

Of course, Galaxy and El Dorado hops are still popular with beer drinkers, so Ska has sold some of its stock and is making oils out of a portion of its supply as well. But the brewery is also over-contracted on other hops, like Cascade, Centennial and Columbus, that it uses in beers like Modus Hoperandi, one of its flagships.

Those hops are still used in thousands of beers, but they aren't as trendy. So Thibodeau says BHC may return after its initial run with a new hop profile in the future. "All the ruckus right now is about newer hops and Southern Hemisphere hops, because they are exciting and fun."

In the end, Thibodeau says the Ska team is still making beers that they want to brew and "turning lemons into lemonade." Oh, and the hops contracts will all have expired by the end of 2018, which is when "we'll probably be back on the other side," he says with a smile, "trying to find the hops we need again."