CBD Sales Have Tripled Since 2014, but Is Big Pharma Taking Over?

Kate McKee Simmons
High-CBD plants and industrial hemp are on the rise, but who's cashing in?
The CBD fad is growing quickly in America, with everything from hemp-derived CBD vaporizers to high-CBD strains like AC/DC and Harlequin becoming more and more popular for medication. Multiple times each week, Westword receives another announcement of the record-breaking revenue that CBD products are pulling in.

But none was as thorough as the recent mid-year report on the CBD market from the Hemp Business Journal, one of the more trusted sources in the industry. Using some of the most advanced data-tracking firms in the marijuana industry, including BDS Analytics and New Frontier Data, the Journal compiled roundups and predictions that show a rapidly growing field of CBD products that still has plenty of room to grow.

However, the study predicts that a new player will enter the game and soon take over: the pharmaceutical industry. Unlike smaller, independent CBD companies, pharmaceutical firms can more easily secure testing and trials from federal agencies such as the Food and Drug Administration, and they have stronger lobbying power with the Drug Enforcement Administration. As the CBD market matures, expect dispensaries, smoke shops and health boutiques to lose their tight grip on the market, the report warns.

There's still quite a bit of money to go around, though. According to the study, CBD sales from products derived from hemp and marijuana more than tripled from 2014 to 2017, going from $108.1 million to $358.4 million in just three years. That's nothing compared to the projected numbers for 2020 or 2022, though, which are predicted to reach $1.153 billion and $1.812 billion, respectively. 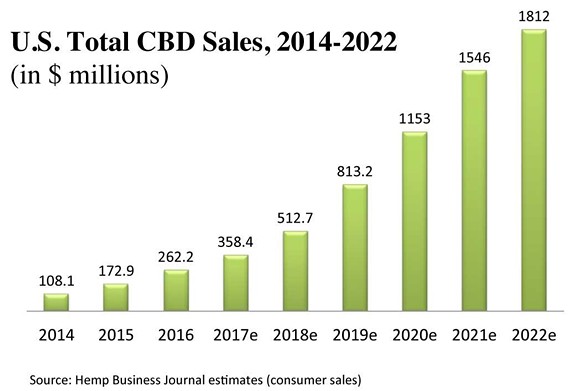 Hemp Business Journal
"Major growth factors in the market include the introduction of CBD pharmaceutical sales by Greenwich Biosciences (the U.S. subsidiary of GW Pharmaceuticals) starting in late 2018 (or 2019) that will drive total market growth," the report states. "Competition between hemp-derived and marijuana-derived companies are expected to increase – with dozens of companies operating in both channels."

According to the report, marijuana-derived CBD products currently hold a slight edge that is rapidly losing ground to hemp-derived sales. By 2020, when more pharmaceutical companies enter the market, those numbers are expected to change even more.

Hemp Business Journal
"There are numerous market forces impacting the growth of these channels. HBJ predicts any kind of scheduling (or de-scheduling) action by DEA, increased FDA regulation, and the beginning of pharmaceutical sales (by GW Pharmaceuticals) will have the greatest impact on these channels as the CBD market develops," the report says.

Hemp Business Journal
While it may seem like a new CBD vaporizer company debuts in a smoke shop every week, those ventures won't account for a large percentage of the market's sales in the future, according to the study. Driven primarily by pharmaceutical sales and Internet transactions, the CBD industry is expected to look totally different by 2020, the study says.

Dispensary products with high CBD should expect to grow in popularity, the study says, and some already are. Mary's Medicinals and Stratos – two companies known for high-CBD, low-THC products and pharmaceutical-style applications such as topicals, pills and transdermal patches – are listed in the study as top brands in America's dispensary channels.