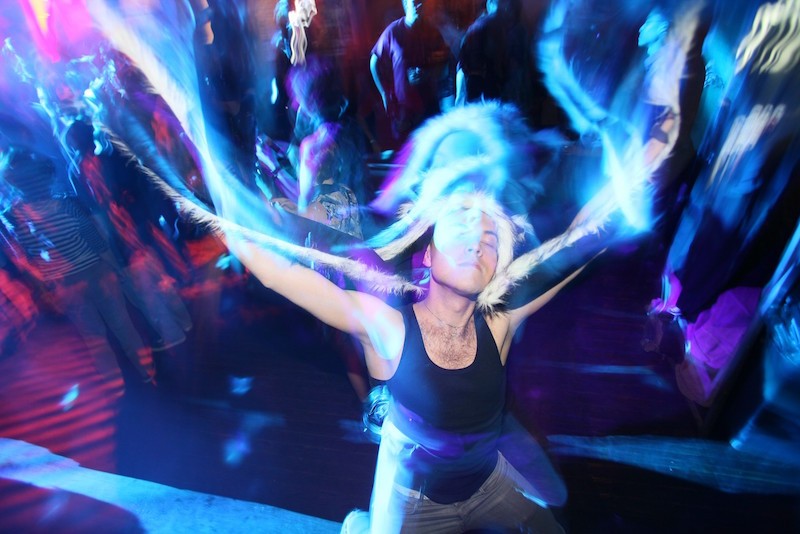 Brandon Marshall
The weekend is nigh, and many Denverites may find themselves scrambling for entertainment plans as well as cash. Fret not, destitute locals, for we've scoured the city for fun-filled events with cover charges that ring in for $10 or less...much less. Whether you want to boogie to house music at a DJ set from Game of Thrones actor Kristian Nairn (aka Hodor), thrill at the literary exploits of a feminist detective, shop for handmade goods or watch Monday Night Football with a pithy pack of comedians, there's no excuse for boredom for the next five days. Keep reading to find out more about the best cheap events in Denver this weekend, including seven freebies.

C/o Berkley Books
Sherry Thomas: Reading & Signing Event
Thursday, September 7, 7 p.m.
Tattered Cover Aspen Grove
Free
Literature's most famous detective gets a distaff twist in Sherry Thomas's Lady Sherlock Holmes series, which just reached its second installment with the publication of A Conspiracy in Belgravia. Hear the tale of Victorian sleuth Charlotte Holmes, who must navigate a gauntlet of personal crises just as an unidentified body presents her with a stone-cold whodunit, as Thomas reads selected passages from her new book, available from Berkley Books for $14. Fans can also mix and mingle with Thomas at a post-reading meet-and-greet where she'll be available to sign copies of her new book. Go to the Tattered Cover events calendar to find out more.

C/o Write Club Denver
Write Club Denver: Required Reading
Thursday, September 7, 8 p.m.
Syntax Physic Opera
$10 Donation
Though writers typically seem like a harmlessly bookish bunch, a fierce sense of competition lurks beneath our tweedy and bespectacled facades. Write Club Denver, a self-described "literary thunderdome," puts that subtext into the spotlight with a series of head-to-head competitive readings from Denver-based authors, comedians and creatives. Drawing upon summer reading-list staples for prompts, the September dais pits local comic against local comic as Stephen Agyei debates "Crime" versus Jared Ewy's "Punishment," then continues with Joy Carletti arguing for the "Old Man" against Erin Rollman representing "The Sea" before concluding with Rachel Trignano and Evan Weissman squaring off as "Sound" versus "Fury." Aside from the thrill of literary bloodsport, the victorious writers will also donate their winnings to a charity of their choosing, so patrons can rest easy knowing that it's all for a good cause. There's a suggested $10 donation for all guests, but no one will be turned away. Visit the Write Club Facebook events page to learn more.

Steve Lynds
Four Mile Free Day
Friday, September 8, noon-4 p.m.
Four Mile Historic Park
Free
Although any day is a good day to amble through Colorado's formative years at Four Mile Historic Park, it's even better with free admission. From noon to 4 p.m. on every second Saturday until December 8, visitors can explore the twelve-acre grounds, mingle with farm animals and grab a seat for the Hay Bales and Tall Tales storytelling show, a particular hit with kids. Built in 1859 on the banks of Cherry Creek, the Four Mile House is Denver's oldest standing structure and current home to a museum that brings history to life. Cap it all off with a free sample from the summer kitchen. Visit fourmilepark.org to learn more.

Brandon Marshall
Rave of Thrones: Kristian Nairn DJ Set
Friday, September 8, 9 p.m.
The Church
$10-$20
Hodor your Hodor off on Friday night at Rave of Thrones, a DJ set from Game of Thrones actor Kristian Nairn at the Church, a fittingly Gothic setting for fantasy fans. In addition to warming and breaking viewers' hearts with his portrayal of the monosyllabic Hodor, the hulking Northern Irish actor is a celebrated progressive house DJ who's traveled all over the world with his wildly popular Rave of Thrones parties. (For the spoiler-averse Johnny-come-latelies, let's just say that Nairn has some free time after the last season.) The wheels of steel start spinning at 9 p.m., so don't miss this opportunity party like a wildling. Tickets, $10 to $20 (plus fees) are available from Nightout. Hodor!


Friday Night Weird: Superbad
Friday, September 8, 8:45 p.m.
Boedecker Theater, Boulder
$8-$11
Boedecker Theater's Friday Night Weird film screenings return this month with a Very Cera September, a series dedicated to that wispy icon of millennial awkwardness, actor Michael Cera. Over the course of five films, cineastes can sample every era of Cera, from his star-making comedic turns to some of the most decidedly outré titles in his filmography. The series continues on Friday, September 8, with a a special tenth-anniversary screening of Superbad, the ambling coming-of-age comedy that launched the actor to stardom. Visit tickets.thedairy.org to learn more and buy tickets, $8 to $11. A Very Cera September continues next week with a screening of Lemon on September 15, followed by Crystal Fairy and the Magical Cactus on September 22 and Youth in Revolt on September 29.