Facebook
A photo of a climb near Westcliff shared on Joseph Seeds's Facebook page.
Yesterday, September 6, Denver's Joseph Seeds Jr. was rescued by helicopter from Capitol Peak, a fourteener in the Elk Mountains range, where five climbers died over a 43-day period between July 15 and August 26. He avoided becoming the sixth casualty on what has been described as Colorado's most dangerous fourteener, thanks to terrific work by extremely busy rescue crews located in the area in and around Aspen and Seeds's tremendous experience when it comes to scaling the biggest peaks in the country.

The photo gallery of Seeds's Facebook page is dominated by shots of fourteeners and other major mountains that he's tackled. Three of them can be seen in this post.

As we've reported, the first Capitol Peak casualty took place on July 15, when Parker's Jake Lord died there. Another Parker resident, Jeremy Shull, perished while climbing the Knife's Edge portion of the peak on August 6.

On August 22, the bodies of Ryan Marcil and Carlin Brightwell, a young couple planning to marry, were found at the fourteener's base. And on August 26, Zackaria White, a 21-year-old from Pine, died from a Capitol Peak fall after reportedly disagreeing with a climbing partner about a descent route. 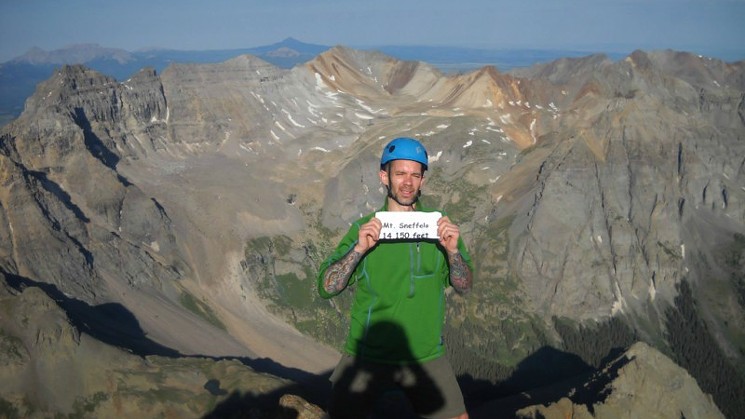 A successful summit of fourteener Mt. Sneffels.
Facebook
The five deaths represent half of the fourteener-related fatalities to have taken place in Colorado in 2017 to date. We've noted that the first person to lose his life while climbing a Colorado fourteener this year was Pawel Abramczyk of Thornton, who died March 19 on Longs Peak. On April 10, Matthew Lackey, the opening executive chef at Arcana, died while rock climbing on Mount Princeton. The body of Jeff Bushroe, a Fort Carson soldier, was found by a hiker on May 27; the official cause of death was hypothermia, to which he succumbed after a fall from the Grand Couloir in the Maroon Bells, another Elk Mountains fourteener. And on August 5, Rei Hwa Lee, 57, fell to her death on the north face of North Maroon Peak.

Then, this past Sunday, September 3, Dr. Jamie Rupp, a Colorado-born physician who'd relocated to Wyoming, died while scaling Challenger Point, a fourteener in Custer County, south of Cañon City.

The details of how Seeds survived a situation that could easily have turned tragic are provided by Mountain Rescue Aspen.

At approximately 2:40 p.m. on the 6th, the group notes, Pitkin County Regional Emergency Dispatch received a report about a climber, later identified as Seeds, who was stranded on Capitol Peak. He'd been descending when he found himself off his previous route not far from the peak's sub-summit, K2. 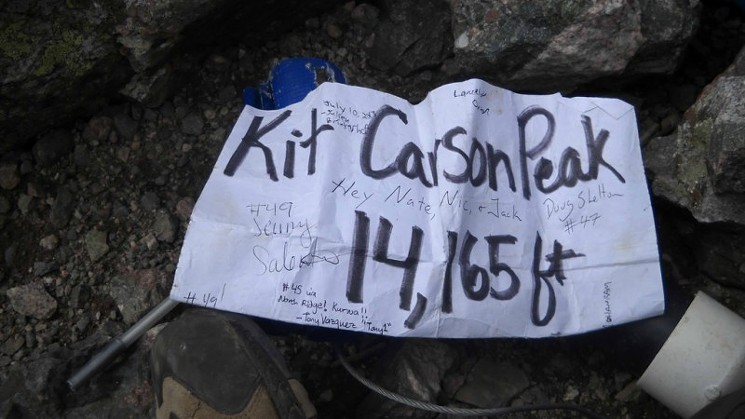 A memento of a successful fourteener climb.
Facebook
By the way, the dangers of climbing down from a peak on an unplanned track were highlighted by the Colorado Fourteeners Initiative's Lloyd Athearn in a recent post containing fourteener safety tips. "When you go up a mountain, unless you're consciously stopping and turning around and saying, 'This is what the view looks like when you're going down,' you might come down a route you didn't come up," Athearn told us. "You might think it's the same, but if you're not clear about where you are, you could be dealing with loose rock on the way down that you didn't see on the way up. And that can be a pretty lethal combination."

To his credit, Seeds recognized that he was in a risky scenario in time to do something about it. Once he realized he would be unable to get back to the correct route and had become stranded on what Mountain Rescue Aspen calls "unstable terrain," he was able to text a friend who called for help.

About two hours later, at 4:45 p.m., a Mountain Rescue Aspen team of two were flown to the area in a National Guard Black Hawk helicopter based at the High Altitude Training Center as four more rescuers prepared to enter the field on foot at the Capitol Creek Trailhead. The chopper squad located Seeds shortly after 5 p.m., finding him thirsty and fatigued but otherwise unhurt, and by 6:15 p.m., the incident was closed, with all parties reported safe.

It's about time a Capitol Peak story had a happy ending.