For the competition, all participants were given twenty pounds of the same green Ethiopian coffee beans, supplied by wholesale company Ninety Plus, and the freedom to transform it from a raw bean into a coffee ready for drinking — and judging.

Competitors turned in their roasted coffee on Friday, September 8; they'll be part of a blind tasting by a panel of judges on Saturday. On Sunday, each roaster will have five minutes to describe their coffee in front of the judges and the public attendees, who will then have a chance to sample each coffee.

“They have to turn that twenty pounds of coffee into the best two pounds of coffee we’ve ever had,” says Hannah Ulbrich, owner of Copper Door Coffee Roasters. Ulbrich is an executive board member of the Rocky Mountain Craft Coffee Alliance, the governing organization that planned the competition. 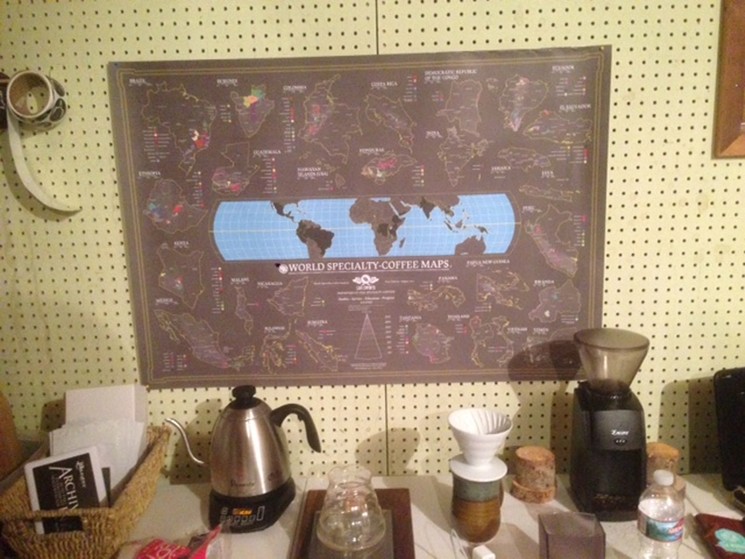 Davis's garage serves as a coffee roasting facility and tasting room.
Danielle Krolewicz
“The same grain of coffee roasted by three different people tastes completely different, so it will be interesting to learn what they did differently,” Ulbrich adds. “They’ll have a chance to tell us how they influenced the roast, about the flavor profile, and to wow the judges on their expertise on roasting.”

The winner of this preliminary competition moves on to the U.S. Roasting Championships held in Seattle next April. 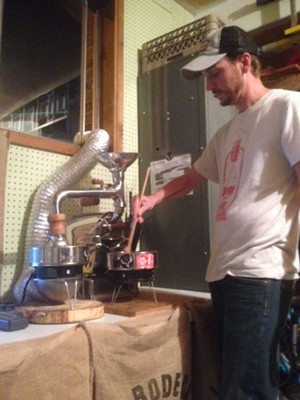 Bert Davis finishes a one-pound batch of coffee.
Danielle Krolewicz
Contender and micro-roaster Bert Davis of KI coffee entered coffee he roasted in his garage. A home roaster for just over two years, Davis is a newcomer to the world of specialty coffee. What started as a hobby with the gift of an air roaster from his mother-in-law turned into a small business when he needed some extra cash to go on tour with his band. He has since upgraded to a Huky500, a coffee-roasting machine manufactured in Taiwan by a retired schoolteacher, Kuanho Li, which he heard about from a friend at Purple Door Coffee. “It sounds crazy, it sounds like a shady deal, because you email this guy in Taiwan and you pay him [over] a thousand dollars.” This miniature version of a full-scale roaster can roast 500 grams of coffee at a time, compared to large-scale roasters that do 5 to 70 kilograms at a time.

Davis, a full-time EMT at Children’s Hospital and the father of two, spends about fifteen hours a week on his business. He does all the roasting, packaging, shipping and marketing. A self-proclaimed math and science guy all his life, Davis has studied the chemistry behind coffee roasting and finds that light roasts suit his palate best. All of KI’s orders are filled one pound at a time, using the Huky to roast and a wooden spoon to stir and cool the coffee once the roasting is done.

One of the benefits of working from home is having the immediate support of family. Davis’s wife, Erin, has encouraged him from the beginning to step out of his comfort zone – to take the business to the next level, and to enter this competition. She also helps with the logistics of roasting, and Davis trusts her palate for coffee more than he does his own. Davis says his eleven-year-old, business-minded son has also helped by providing unsolicited advice. And although KI coffee is sold whole-bean, Davis’s eight-year-old daughter hand-ground some of the beans as a good luck charm for the competition.

He also finds support from peers in the industry. “That’s the cool thing about the coffee community,” says Davis. “Even though we’re technically competing against each other, nobody cares. Everybody is so cool about it and wants to help.

“Coffee roasting at this level and the way the whole industry is exploding is really new,” he adds. “There’s still a ton that people just don’t really know. Nobody is 100 percent an expert, nobody knows everything, which is why guys like me can come in and enter a competition like this.”

Win or lose, his goal is to move out of his garage, with plans to rent roasting time from Jubilee Roasting Company in Aurora, and ultimately save for a place of his own.

The showdown starts today at Copper Door Coffee, 900 West First Avenue, but is only open to the public on Sunday, September 10, beginning at 9 a.m.; admission then is free. Learn more on the Rodeo Facebook page.