Author and activist Erika T. Wurth puts a modern face on Native American life, which she characterizes as a vital but invisible underground, thriving beneath the homogenized American landscape. When she’s not away teaching creative writing for her gig at Western Illinois University, Wurth, a native Coloradan who identifies as Apache/Chickasaw/Cherokee, writes novels and poetry and can be heard at readings about town; her recent short-story collection Buckskin Cocaine brings her Native community to life in raw, human terms. In her answers to the 100CC questionnaire, Wurth opens a door on her private world. 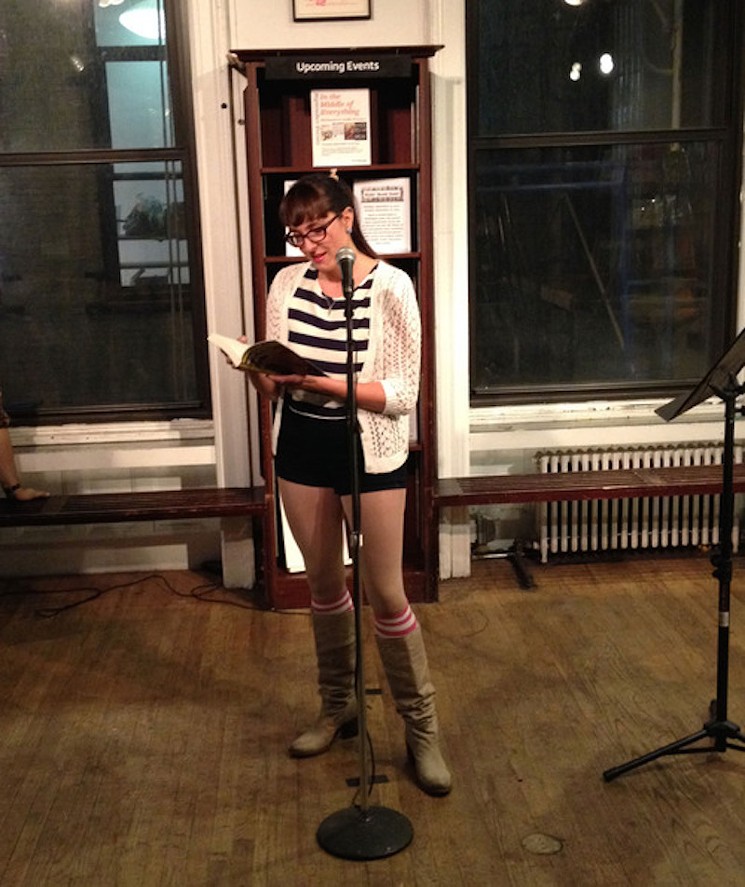 Erika Wurth at a reading.
Courtesy of Erika T. Wurth
Westword: What (or who) is your creative muse?

Erika T. Wurth: If I have a muse, I suppose it begins with where I came from. I grew up in between two small towns, Idaho Springs and Evergreen. And though I was mainly middle class, my parents come from working-class backgrounds, and mine was a mix. Middle-class and working-class, Latinos of Native descent, Native Americans from all tribes, and many, many working-class whites – the common denominator being the mullet. Subsequently, I think my muse has been Albuquerque and Denver and the thriving Native life that nobody talks about within it. It's also been science and what I can do with science fiction that is also imaginative and poetic and speaks to my world.

That's easy. My grandmother on my mother’s side, Langston Hughes, and J.D. Salinger. And why? Because I can't imagine three people that I either admire more or love more or are more fascinated by. And the conversation they would have — especially because my grandmother was a blues singer, and that was Hughes's bag — would be fascinating.


What’s the best thing about the local creative community in your field — and the worst?

I think the best thing is sometimes honestly the work, as cheesy as that sounds. Most of the time you're sitting down to the computer, especially with prose, and it's just work. And sometimes it's frustrating work. But when you have those magical moments, they are so truly transcendent, and even if it doesn't result in the best prose, there's something about them. I think that's why most of us do it. Or at least it's why I do.

The worst part is for me, as whiny as this is going to sound, is the publishing world in regard to institutionalized racism. There are so many people publishing on Natives like Alexandra Fuller, whose book Quiet Before the Thaw is utterly silly and absurdly racist, based on three months that she spent on the Oglala reservation. And it was published by Penguin and lauded by the New York Times — and it's just terribly written. It is bad art, man. And a few books by Native people get published, but mainly if they fit the “I'm from the rez, and I got off of it” paradigm. And some of those books are really good, but we are so much bigger than that. My agent had hell selling my book on Native gangs, Ìina, which finally went to a university press, probably right at the same time Fuller was selling to Penguin. And why was it rejected? Because it was too dark. Something I saw my white male peers being lauded for.

The only thing that I could say in regard to that is that my poems are sometimes published by folks in France or Eastern Europe. And that is cool.


Are trends worth following? What’s one trend you love and one that you hate?

You know, I almost don't know how to answer that. For example, I know that literary horror or literary fantasy or literary science fiction is trending and that I'm writing something like that right now, but I genuinely did not come to it for that reason. I just thought it would be cool to write something science fiction, because I'm a fantasy and science-fiction nerd and always have been #trekkie4life.

I don't have a bucket list. I always find that really weirdly American and creepy, too, because it's like, “Oh, now that I've crossed everything out, I'm ready to die.” Often I decide things and then try to make my boyfriend do them with me, like go to Cuba — and then, you know, Trump is elected.

What’s your best or favorite accomplishment as a creative?

Ultimately, I don't have a favorite. I'm just excited to continue to publish despite all the odds against me. And I have a lot of things going for me. When I compare myself to my grandmother, I have it good. I just feel lucky that there are people in the publishing world, like my former editor-in-chief Jacob Knabb, or Duncan Barlow, who runs Astrophil out of the University of South Dakota, who see my work and say, I don't care what people are going to think about this, I'm getting behind it.

Denver (or Colorado), love it or leave it? What keeps you here — or makes you want to leave?

I grew up here. Right on the outskirts, as I said above. I have to admit I love Albuquerque so much, because it has its problems, but it's a great place for creative Natives. But Denver is my home. There are so many Native people who have threaded throughout this city, and nobody seems to acknowledge it. I want desperately for people to see that this is an Indian city, too — not just originally, not long ago, but right now, and we're being driven out because it's just so expensive to live here. I split my time between here and my job in rural Illinois, and though I have come to see the Midwest as one of my homes and a part of who I am now, every time I come home to Denver, I think about how deeply right it is for me to be here.


Who is your favorite Colorado Creative?

Steven Dunn — he does the hard work. He has put together a series for writers of color, and he found my book in a bookstore and e-mailed me and offered me a reading, and now of course I have forced him and his wife to be my friends. But he cares about community, and he cares about HIS community, and that's something that I can relate to. And of course my boyfriend, David Heska Wanbli Weiden. He's a Denver native, and he's working on finishing his literary crime novel that takes place on the Rosebud reservation and in Denver. I'm so excited about it.

I've been working on a pipeline project, and though I'm always on the line about nonfiction, I want to see if I can finish it. I've interviewed one white dude from the Midwest and a Native woman from Standing Rock, and I'm talking about the ways in which the pipeline has affected their lives, even though they are so incredibly different. I'm also about a third of the way through my science-fiction novel, which is about a Native woman who works for SETI, who gets in contact with an alien world, one that is being invaded by strange, silent silver ships.

That's hard to say. But I can say that I'm excited about Rebecca Roanhorse's work — she's a Pueblo Fantasy writer and just a fabulously smart and talented woman who beat those odds down to a pulp.