Mile High-Five! Inside the Stadium for Broncos' Ass-Whupping of the Cowboys 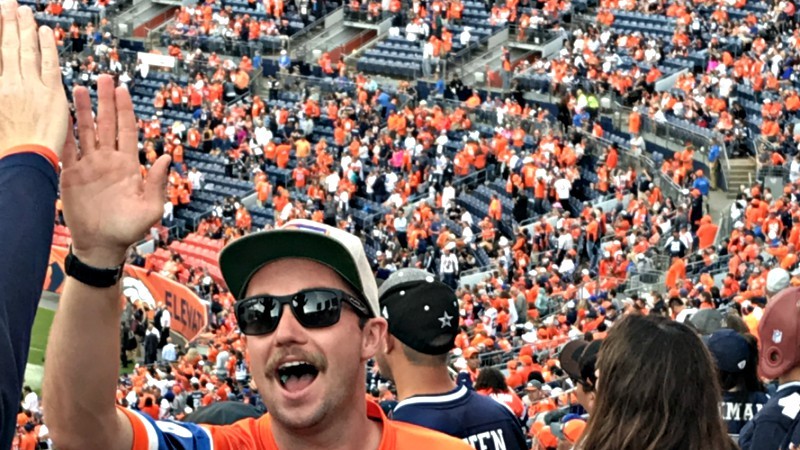 Photo by Lora Roberts
This Broncos fan was the cheerleader for our section — and he was made sure no one wanting a high-five was left hanging.
As we noted in our post about the top tweets tweaking Cowboys fans after Denver dismantled Dallas 42-17, the stands at Mile High Stadium definitely weren't pure orange during the game yesterday, September 17. Cowboys boosters in the thousands turned out to witness their heroes get their ten-gallon hats handed to them by an inspired Broncos defense that rendered star running back Ezekiel Elliott impotent and a Trevor Siemian-led offense whose efficiency and effectiveness definitely raised expectations for the still-young season. The photos shared here, mostly captured by Lora Roberts, my daughter, provide a Snapchat-story-like look at the thrilling scene.

Noteworthy events included a lengthy weather delay toward the end of the first quarter. The referees said they ordered the squads off the field because of lightning in the area, but you couldn't prove that by me. At one point, I thought I saw lights in the sky from a distance, but that may have been as a result of all the raindrops in my eye. After the delay was over, one Cowboys booster said to me, "Your owner ought to build a roof."

We also witnessed some spirited exchanges between Denver and Dallas backers, but none of them got out of control. At one point, Lora was afraid two attendees with opposing loyalties might come to blows, but when they looked up at the giant screen above them and saw a Broncos video about treating everyone with respect, they pointed and laughed.

The most boisterous dudes in the vicinity of our south-stands seats were the guy seen at the top of this post, the self-appointed cheerleader of the section, and the colorful fella directly in front of me, who gleefully waved goodbye to Cowboys enthusiasts leaving in the fourth quarter and chided members of his Broncos brethren doing likewise after Aqib Talib returned an interception 103 yards for a touchdown. "Don't ever leave early!" he shouted. "Don't ever leave early!"

You'll get two angles on him below, along with some other images and captions from a very good day in Broncos country. 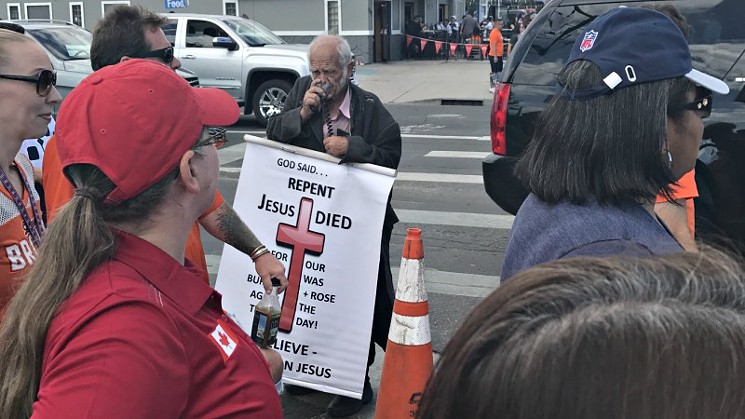 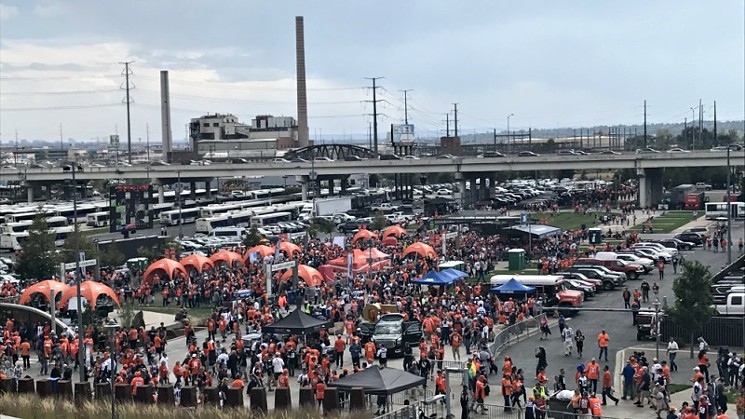 The throng gathering before the game.
Photo by Lora Roberts
click to enlarge

Cowboys colors were common at a typical security entrance.
Photo by Lora Roberts
click to enlarge

A member of Denver Broncos Thunderstorm sails onto the field prior to an appearance by the other type of thunderstorm.
Photo by Lora Roberts