Mark Antonation
Birdcall's chicken sandwiches will soon be coming to downtown Denver's hottest neighborhood.
Not everything opening up in the blocks behind Union Station is a wood-fired restaurant or lavish eatery from an out-of-town corporation. There's a Whole Foods going in on 17th between Chestnut and Wewatta streets, which will include a second outpost of Birdcall, the chicken-sandwich joint that opened this summer in Five Points from the team behind Park Burger.

Bircall co-owners Jean-Phillipe Failyau and Peter Newlin had already announced that an outpost of their quick-service concept is being built in a former Twister's Burgers & Burritos at 1535 East Evans Avenue, but it looks like the Whole Foods location will come in first.

Newlin was a speaker at the first day of Denver Startup Week, where he talked about the importance of technology in new restaurants, the difficulty of hiring contractors in the construction-crazy Denver market, and the new Whole Foods location, which he says will be a complete restaurant on its own (rather than a counter-service kiosk like the Biju's Little Curry Shop operations at Whole Foods in Boulder and at Tamarac in South Denver), complete with approximately 100 seats inside and out, a bar with two dozen local beers on tap, and its own outdoor signs as part of the "Friends of Whole Foods Market" concept. Because of the arrangement, this will also be the first Whole Foods grocery store in Colorado that will sell beer and wine to customers inside the store. 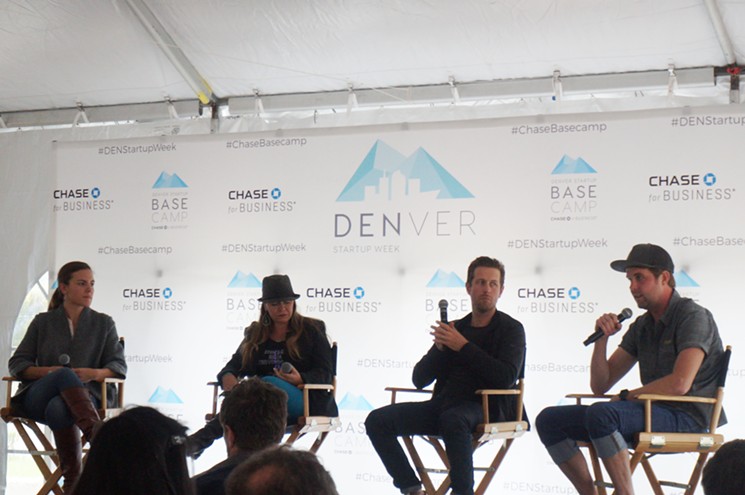 Birdcall's Peter Newlin (right) talks about lessons learned in the restaurant business with Rioja co-founder Beth Gruitch (second from left) and Frasca co-founder Lachlan Mackinnon-Patterson (second from right) at Denver Startup Week.
Mark Antonation
At the panel discussion, titled "Resilient Restaurateurs: Growing a Restaurant Group From the Ground Up," Newlin also talked about the order system used at Birdcall to help keep the cost of chicken sandwiches down. Noting that the common wisdom in fast-food restaurants is to either use cheaper ingredients to keep the price down or to raise prices for quality ingredients, his goal is to offer quality ingredients at a low price. Birdcall's chicken sandwiches start at $5.75, a price made possible in part by implementing self-service ordering stations for customers. The system automates ordering and the financial transaction, leaving front-of-house employees (of which there are only one or two) to interact more personally with guests.

Considering the recent purchase of Whole Foods by Amazon, the use of technology in food service seems appropriate. Could Amazon drone delivery of chicken sandwiches be far away?