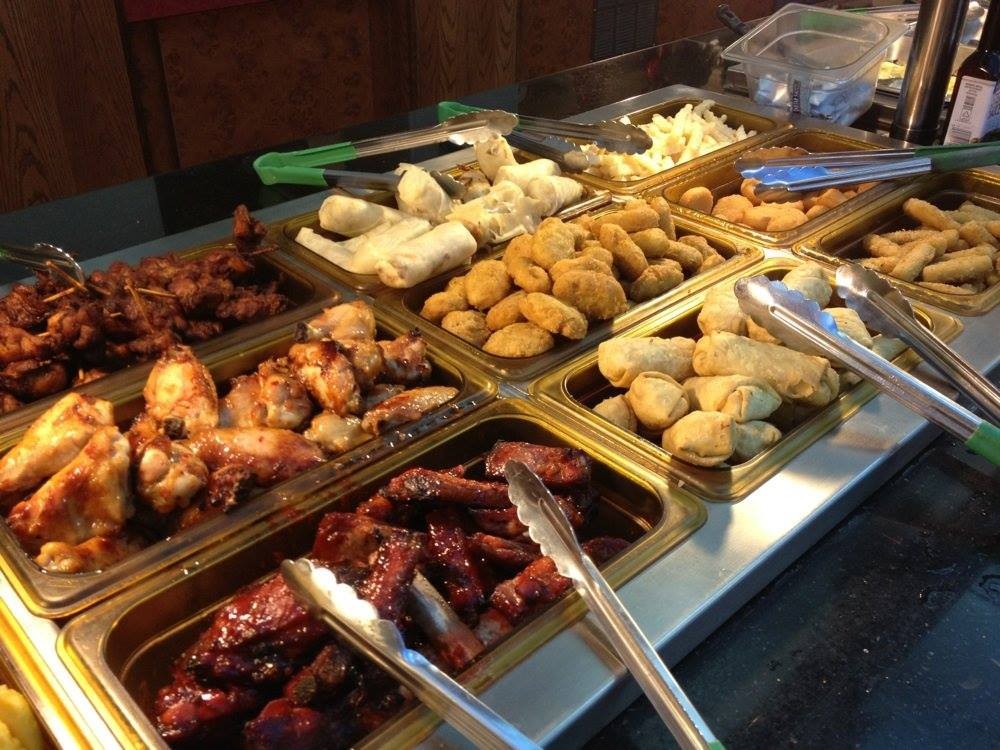 Facebook/Mr. Panda Super Buffet
Wings and things at the appetizer station at Mr. Panda.
Buffets are a great place to dine alone. You can sample every dish offered that you wouldn’t normally try — and nobody judges you. At least that was my rationalization for multiple trips to the six different buffet islands at the oddly seductive Mr. Panda Super Buffet at 2852 South Havana Street in Aurora.The staff did a wonderful job clearing plates from my table so that the evidence from trips one and two was gone before I even got back with my third.

For my first round: the soup station and salad bar. Although I was a little confused by the corn on the cob and Buffalo wings next to the egg drop and hot-and-sour soups, I still piled on a few wings next to my soup cups — and I’d be lying if I said those weren’t some of the best damn wings I’ve had. Tender meat with mildly spicy wing sauce had me eating all my selections with a side of wings for each trip I made.

The soups were hot and classic. The salty broth and egg-to-tofu ratio was perfect in my egg drop soup; the hot-and-sour was bold and spicy, and the dumplings in the wonton soup tasted good, even if they did have a certain pre-made, from-frozen quality.

The restaurant stations appeared old and worn, but the Mister Panda crew kept them clean and brought out piping hot trays of glistening food at a reassuring pace — most of the time before old trays were even half gone. Someone on a loudspeaker called out to the servers at regular intervals to let them know they’d cooked a certain dish and that it was ready to come out. I contemplated the unusual choice of classical music playing on repeat while I gnawed on my Buffalo wings, ate my surprisingly crisp salad and slurped my hot-and-sour. I felt like I was playing the Sesame Street game “Which of these things doesn’t belong?” I guess that’s where they got the idea to put “super” in front of buffet; I found that in Mr. Panda’s case, super means extra, and beyond the realm of standard Chinese offerings.

The appetizer station was well-stocked, and I was pleased to find that even though the “cheese wontons” were albino-looking and doughy, they were rich, creamy and satisfying (no crab to be found, however). The egg rolls — both meat-filled and vegetarian — were a little flavorless and oil-soaked, and could easily be skipped to save room on your plate for another couple of wings.

The vegetables are fresh and crisp, even if the meats are a little bland.
Facebook/Mr. Panda Super Buffet
The main dishes, for the most part, didn't live up to my first round of soups and appetizers. The teriyaki chicken on a stick, and every other piece of meat in the traditional Chinese dishes I tried, were heavily fish-sauced and chewy. The lo mein noodles however, were not falling apart or rubbery as I expected they would be, but silky and al dente and went tremendously well with the garlic shrimp. Normally, I don’t bother with shrimp at a buffet, but after overhearing another patron rave, I had to try it — and indeed, this shrimp was tender and luscious.

Another selling point of this buffet is that it serves up fresh, crisp vegetables with the entree selections and at the salad bar. I did not see one wilted or brown piece of lettuce in the whole bin, and it was as fresh-tasting as it looked. The veggies accompanying the mains weren’t grey and overcooked, as you might expect from buffet food, but brightly colored and pleasantly toothsome, without a mushy or bitter morsel in the bunch — just firm, lightly steamed or sautéed slices, which could be credited to the frequency with which the staff refreshed the trays. While Mr. Panda may or may not get staples like sesame chicken, dumplings and other appetizers from the frozen section at some restaurant warehouse, it apparently acquires produce fresh from the market (with the exception of the canned Chinese fruit and peaches at the salad bar).

The dessert table was lacking in Chinese fare, with chocolate pudding, jello and lemon cake, but it did include almond cookies and sesame balls filled with chocolate. And, somewhat oddly, there were two self-serve frozen-yogurt machines in the back of the restaurant dispensing vanilla, chocolate, strawberry or a “twist” of chocolate and vanilla. (Both machines had curdled, sticky milk residue on top of the handles where it had repeatedly leaked out, so I passed on the fro-yo.) In fact, the frozen-yogurt machines and the flecks of grease and various sauces on some of the walls were the only concern in the cleanliness category. (But I’m not the white-glove brigade; I’m just here for the food, so I can get past that.)

Every staff member at Mr. Panda was either refreshing the buffet with steaming-hot trays of food, cleaning the countertops, clearing plates from tables or getting refills on beverages for customers. And for $8.95 a person for lunch on a weekday, $9.95 Saturday and Sunday (from 11 a.m. to 4 p.m.) or $13.59 for dinner (from 4 p.m. to closing time) seven days a week, Mr. Panda Super Buffet includes all the usual heaping hot pans of glistening traditional dishes, plus lots of extras that you wouldn’t expect. Bargain alert: Kids eat for 70 cents during the weekly lunch buffet and $1.00 on weekends. Seniors are also offered a 50-cent discount for lunch and a $1 discount for dinner. Everyone pays a flat $13.59 for the all-day holiday dinners served on Thanksgiving and Christmas.

All things considered, Mr. Panda Super Buffet is well-stocked and clean where it matters, and has quite a few dishes and appetizers that are flavorful and worth a second trip to the buffet. Or, at the very least, if you shun buffets on principle or Chinese fare isn’t your thing, you can still get yourself a takeout box of sports-bar-worthy wings for your next Broncos party.

Four years ago, we profiled every restaurant on Federal Boulevard in our Federal Case series. Now we're doing the same on Havana Street, from East Hampden Avenue up to I-70.