Review: Company Is Quite a Party at Aurora Fox 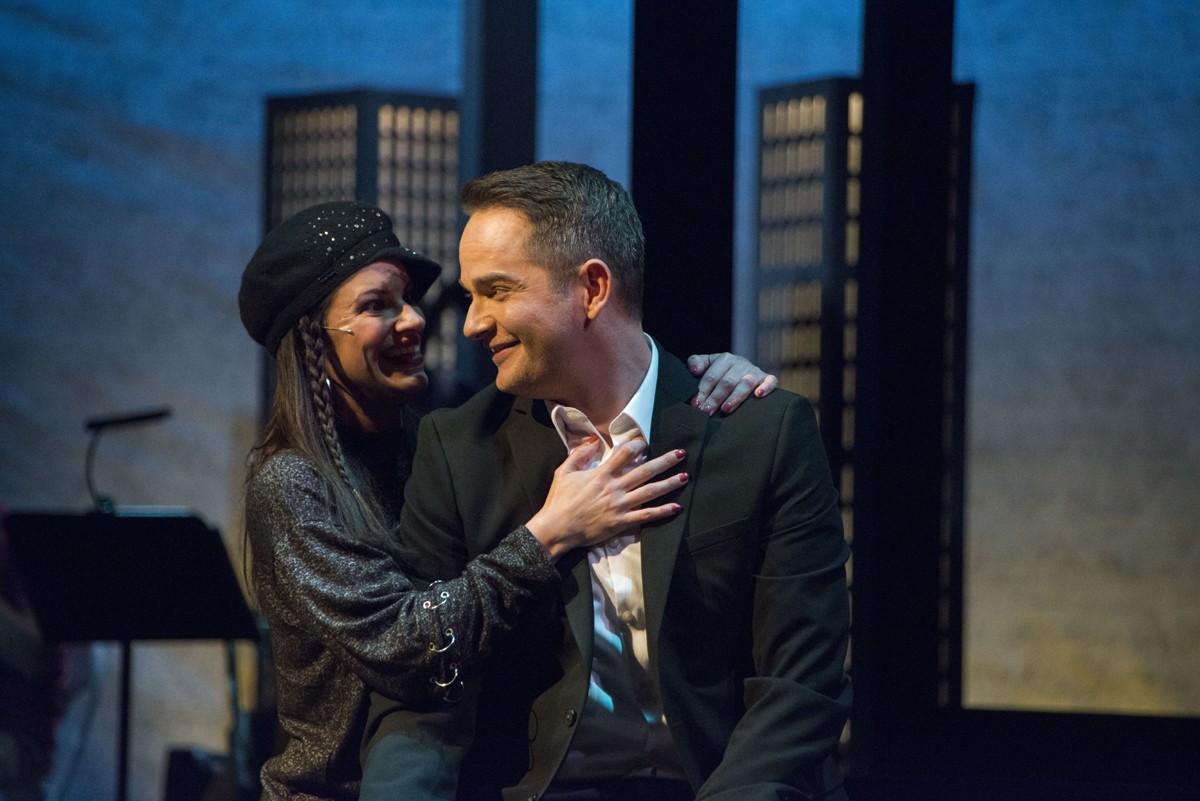 Christine Fisk
Lindsey Falduto and Jeremy Rill in Company.
It’s Bobby’s 35th birthday, and his friends are throwing a party. He’s single; his friends are married. Company, a musical by Stephen Sondheim now at the Aurora Fox, consists of a series of scenes between couples, with Bobby almost always the observer, as well as the occasional scene in which he’s with a lover. A temporary lover. Turning 35 represents an existential crisis for Bobby, although his aversion to commitment is never really explained in the script. He just seems a bit aloof, a bit narcissistic, envying his friends’ married state but constantly probing the weaknesses and rifts in their relationships. But then Joanne, the oldest and most multiply divorced of the women, belts out her famous drunken salute to “The Ladies Who Lunch” — a wealthy, aimless class of which she’s certainly a prime example — and Bobby is jolted into the realization that perhaps he does, indeed, long for the warmth and companionship of a life partner.

First produced in 1970, Company feels somewhat of its time. The play is a meditation on married life, Bobby’s singleness, and relationships between men and women in general, but in a very limited way. Everyone’s white; everyone’s straight; these people might have professions, but we’ve no idea what they are — and certainly no one is worried about money. The couples love each other, but in song after song (brilliant song, it must be noted), the men regret and the women fret — the men because of their loss of freedom, the women over their partners’ shortcomings. A new version of Company is currently being hatched in London, in which Bobby becomes Bobbie and all the action is seen from a woman’s viewpoint. Sondheim, notoriously protective of his work, miraculously okayed this version, just as he okayed the wonderful gypsy-music-inflected Sweeney Todd: The Demon Barber of Fleet Street that showed at the Denver Center in May 2016. The revamped Company could be just as successful, but we won’t know until it opens next year.

In the meantime, this Company is a boatload of fun. George Furth’s sharp script is reminiscent of Sex and the City in its smart, entertaining early days, before the show transformed into an empty-headed extended fashion show. The music is spectacular: Sondheim’s lyrics are a hoot, and the score is amazing, varied and intricate, with witty, springy solos and duets that I imagine are very difficult to sing; choral numbers that wrap around or link to or comment on the scenes; and complex polyphonic numbers. The voices and instrumentalists are more than up to the challenge. Director/choreographer Kelly Van Oosbree, who also directed Vintage Theatre’s rip-roaring and couldn’t-be-more-different musical tribute to Johnny Cash, Ring of Fire, has assembled a fine four-person orchestra under the musical direction of Andrew Fischer, who also plays piano (the other musicians are Kurt Ochsner on drums, Cristina Montoya on bass and David Waldman playing violin), as well as a terrific cast — all of them such accomplished singers that I really wondered why they had to be miked in the Fox’s relatively compact auditorium space. Jeremy Rill, who plays Robert, has a richly melodious and supple voice that’s sheer pleasure to listen to. Lauren Shealy, too, delivers beautiful singing and gives a lively charm to her scenes.
Heather Lacy has a lot of presence, and belts out “The Ladies Who Lunch” with everything she’s got as cynical Joanne. Lainey Rigg, tall, graceful and sweetly natural, stands out in the show’s most memorable comic song, “You Could Drive a Person Crazy.” But, really, this production has no weakness.

The result is a joyous, evening-long blast of music and talent that makes for very good Company.