Photo by Angela A. via Yelp
Keith Hammock posing with the Rasta Bus he once drove.
As seen in the photo above, Keith Hammock was once the driver for the Rasta Bus, a service that won a Best of Denver award in 2006. But if this recognition was a high point for him, yesterday marked an all-time low. On October 4, Hammock was sentenced to eighty years in prison for a 2016 shooting of two teens who invaded his home marijuana grow. One of the teens died in the incident.

Here's the text of Hammock's Best of Denver award: "Keith-David Hammock works seven days a week, from 10 p.m. to 6 a.m., shuttling the city's inebriated in a converted RTD Access-A-Ride van that was gifted to him by the Bianchi brothers, owners of Sancho's, Quixote's, Cervantes' and Dulcinea's. In exchange for driving Bianchi bar customers between the hippie empire's establishments, Hammock can transport whomever else he pleases, wherever they please, at a price typically cheaper than your standard cab. But it's not just the cost that makes the Rastavan such a savvy deal. Rasta Keith's laid-back, friendly and cool demeanor ensures that everyone enjoys their time on the bus, be they concert-goers, birthday-celebrators or yuppie businessmen. Being able to bring your own booze on board doesn't hurt, either."

The coverage Hammock received in this space just over ten years later was far less pleasant.

At around 2:08 a.m. on October 9, 2016, as we've reported, the Denver Police Department received a call from a fourteen-year-old boy who said he'd been shot and his fifteen-year-old male friend was dead. The teen didn't know his location, but a DPD shot-spotter report pinpointed the address as being near Hammock's residence, at 2830 Race Street. 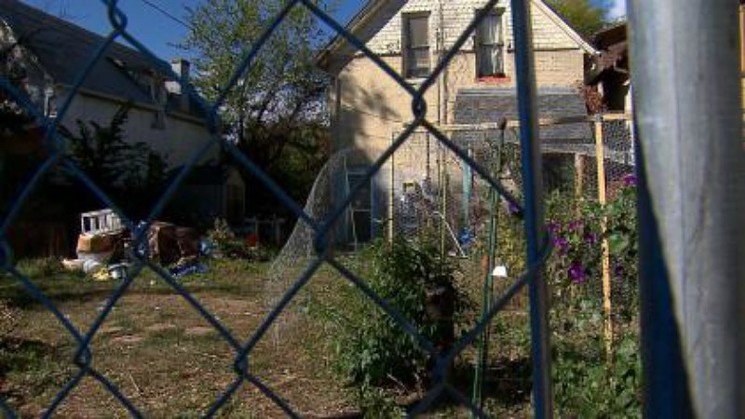 Keith Hammock's back yard.
CBS4 file photo
Upon their arrival at the scene, detectives found a black semi-automatic handgun and eyeballed "numerous mature suspected marijuana plants" growing nearby, some in five-gallon orange buckets.

Shortly thereafter, the cops contacted Hammock and Eleise Clark-Gunnells, the actual owner of the house; she identified Hammock as her roommate and former boyfriend and said he was the one growing the marijuana. Shortly thereafter, after obtaining a warrant, law enforcers searched the second-floor bedroom occupied by Hammock, where they located two long rifles, spent cartridge casings and ammunition, as well as a window screen that appeared to have been altered or damaged.

Hammock wasn't immediately charged with a crime in the incident, but writer Alan Prendergast, who explored the question of whether Colorado's Make My Day law should be expanded in 2013, suggested that the measure might not be applicable in this instance. "Although such attempts are rarely successful, the statute has sometimes been part of a self-defense claim in the shooting of a troublesome relative, a spouse's lover or a drug dealer peddling bad meth," Prendergast noted, adding that "whether the law has any application to pot growers seems to depend largely on where the pot is being grown. There's no allowance in the law for shooting fleeing suspects who've already departed the residence, nor does it generally cover fracases in the street."

An additional factor involved the status of the grow — and the conclusion didn't break in Hammock's favor. A week-plus after the shooting, the Denver District Attorney's Office charged him with two counts of first-degree murder, four counts of attempted murder, and one count each of manufacture and cultivation of marijuana. The filing also alleged that Hammock wounded a seventeen-year-old in September 2015 in a similar shooting.

Keith Hammock's booking photo.
Denver District Attorney's office
The trial finally got under way in July, and after five days, a jury convicted Hammock, but not of murder in the first degree.

Nonetheless, the sentence Hammock received was heavy. According to the Denver District Attorney's Office, the eighty-year jolt represents "the maximum combined sentence for the murder and assault convictions."

Clearly, Hammock's driving days are over for a long, long time.