Denver District Attorney's office/Boulder Police Department
Booking photos of John D. Kennedy and Jack Warmolts.
Critics have long complained about the relatively light sentences given to some prominent white, privileged college students found guilty of sex crimes, and this week brings another example of the phenomenon. Jack Warmolts, a onetime Air Force Cadet who pleaded guilty to second-degree assault and unlawful sexual contact in October 2016, is now back on the streets after serving only eight months of a one-year term. However, ex-CU Denver student John D. Kennedy was sentenced to a minimum of nine years for sexual assault and more in part because his victim wrote an impassioned letter asking the judge in the case not to "allow another predator to go free."

The letter is accessible below.

The poster child for such wrist slaps in Colorado is convicted rapist Austin Wilkerson, a former CU Boulder student who was ordered to serve just two years of work release (plus twenty years' probation) for raping an intoxicated woman, then liberated from this obligation in August, one year early. But the Warmolts matter has been just as controversial, in part because of prosecutorial tactics allowed in the case. As we reported in July 2016, the judge in the case ordered that Warmolts's legal team be given his accuser's then-current address so that her neighbors could be questioned about her "reputation and truthfulness."

For our post, we spoke with Brie Akins, executive director for the Colorado Coalition Against Sexual Assault, who saw commonalities between this decision and the light sentence handed out to Stanford rapist Brock Turner.

"In the Stanford case, we saw extreme leniency when there was discretion around sentencing," Akins said, adding, "There needs to be training around judges in order to make informed decisions around these types of things. You get judges with a wide range of expertise and knowledge making decisions about what is and isn't relevant in a case — and a lot of victim-blaming myths come into place." 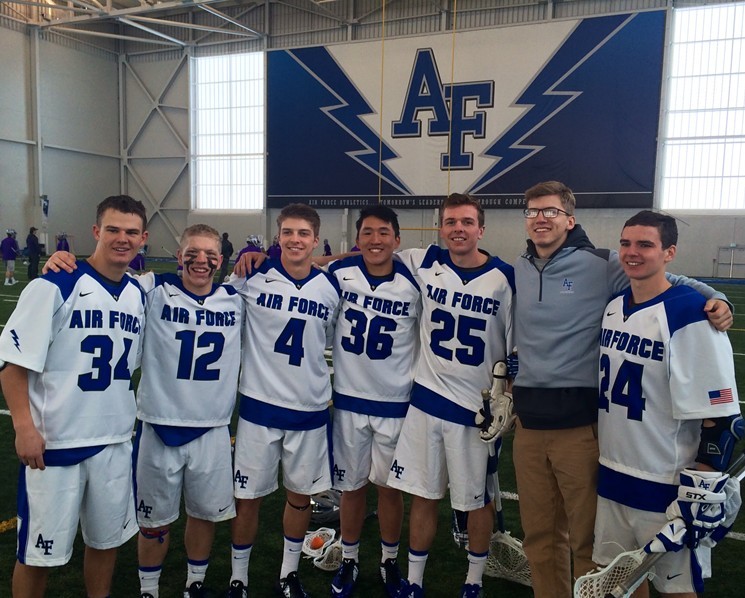 Warmolts, third from right, with other members of the Air Force lacrosse team.
Facebook
Like Turner, a champion swimmer, Warmolts, who's originally from Upper Arlington, Ohio, was also a notable athlete — a fine lacrosse player.

His Air Force Falcons bio highlighted some of his stats and other factoids:


2015: Saw action in five games and started in one … picked up one ground ball on the season.

Personal: Member of cadet squadron 10...attended the USAFA Prep School...son of Doug and Carrie Warmolts...major is management...after his Air Force career, would like to someday own a fly fishing lodge.

These plans were at least temporarily set aside because of his troubles with the law.

According to the Boulder Police Department, the Warmolts incident took place late on April 18 or early on April 19 of 2015. That's when a nineteen-year-old woman visited the University Hill area of Boulder with a group of friends, including her brother.

As detailed in a police report, the woman subsequently met Warmolts, who was with a number of cadets known to the woman's friends, and he told investigators that the pair engaged in what he described as consensual sexual contact in an alley after drinking. He maintained that the woman was not incapacitated by her alcohol consumption, but her friends disagreed, and both blood and mud was found in her underwear. Testing later detected no semen but scored a positive for Warmolts's DNA — evidence that helped lead to his arrest in March 2016. 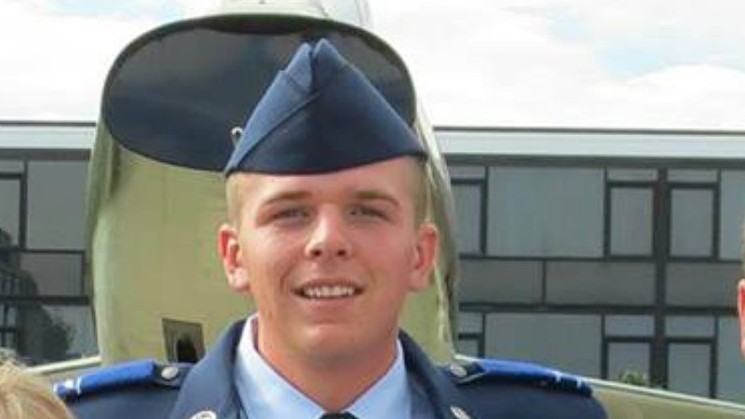 A Facebook photo of Jack Warmolts wearing his Air Force uniform.
Facebook
The original address of the accuser was provided to Warmolts's lawyers. But she is said to have moved out of state because of the case, and his defenders asked the judge for access to her present domicile so that those living near her could be quizzed — and at a hearing in June of last year, the court acquiesced.

When asked if she objected to Warmolts's attorneys being given the first address, the coalition's Akins offered possible reasons for this action. In her words, "You have to balance a defendant's right to get the information they need in order to defend themselves. And if the neighbors had witnessed the assault or the immediate aftermath of the assault, it might relate to the incident itself rather than a broader general picture."

No telling if his attorneys' hardball tactics worked to Warmolts's advantage — but just weeks before his trial was set to begin, he pleaded guilty to second-degree assault and unlawful sexual contact as part of an agreement with the Boulder County District Attorney's Office that kept him out of prison. Instead, he was reportedly confined in Boulder County Jail for 242 days before being cut loose early, on September 30, because he'd accumulated about four months' worth of what's commonly referred to as "good time."

Kennedy's case, as described by the Denver District Attorney's Office, is every bit as disturbing as the others mentioned in this space. The victim in the incident over-celebrated on Halloween 2015 and wound up unconscious. Friends of hers got her safely into an apartment in the Auraria Student Lofts, but after they left, Kennedy, who lived in the complex, picked up the woman from her place and carried her to his, accessible by a shared hallway. A friend eventually found the victim at Kennedy's apartment, and subsequent DNA tests showed she'd been sexually assaulted. 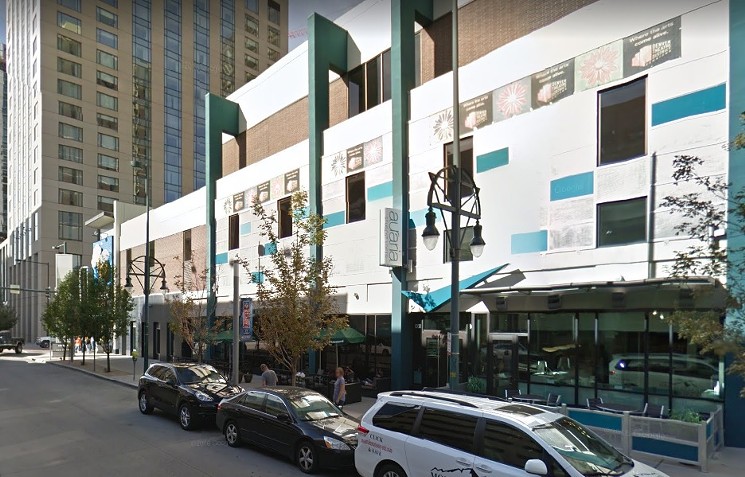 The Auraria Student Lofts, where John D. Kennedy and his victim once lived.
Google Maps
These events are described in much more specific detail in the aforementioned letter, which was read at the sentencing hearing and released by the DA's office with the author's permission. It begins like so:


I think about things as before and after the sexual assault.

Before, I used to think very highly of the defendant.

After, I didn't even know him.

Before, I used to think he was one of the good ones.

After, I realized he is just a good predator.

Before, we always got along well and I loved that. Being a guarded person, I prided myself in recognizing a genuine person when I met them.

It took one night for the defendant to change my mind about him and alter my life in ways I never thought could be possible.

One key section of the narrative that follows involves the comments of a friend who encouraged the victim to press charges against Kennedy. "You can't let him get away with this and do this to another girl," the friend said, to which the woman wrote, "The wisest words I've ever heard come out of her mouth."

The letter mentions the Wilkerson case in the context of "rapists not getting the punishments they deserve" before leading to this emotional conclusion:


And here we are. Standing before you, Judge, debating if he deserves prison time or not. I am sickened all over again. Finding another moment in my life that will be defined as before and after. Another chapter, "Before the sentencing and after the sentencing." He has done nothing but darken my world and has caused me to lose trust in people who don't deserve it. He has shown no remorse, but I imagine will put on a show today. He needs to pay for what he did and I don't think he will come to terms with himself and his actions without a prison sentence.

Don't allow another predator to go free. This isn't justice and it isn't right. The community needs to know that they're safe and that people who do such heinous crimes are punished and aren't stepping foot on college campuses.

After today to be defined as: Before sentencing, there was fear. There was pain. There was a crime and a conviction.

After sentencing, there was justice.

In the end, Kennedy was sentenced to what the DA's office refers to as "nine years indeterminate." This means he will have to serve at least nine years, but the sentence can be extended if the parole board determines that he has not yet been successfully rehabilitated. In fact, some prosecutors might characterize the sentence as nine years to life.

In a statement released afterward, Denver District Attorney Beth McCann said in part that the sentence "sends the message that campus sexual assault is not ‘business as usual’ and that this is a serious criminal act."