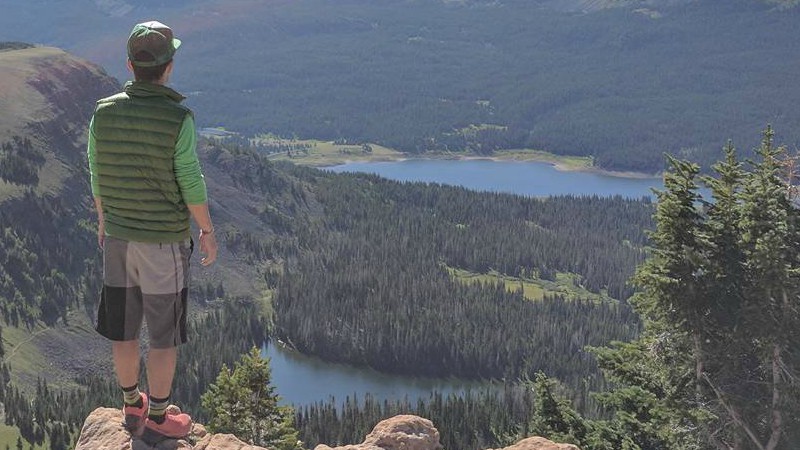 Facebook
Dan Hohs posted this photo on Facebook in August.
Dan Hohs, a well-known triathlete from Steamboat Springs who wrote movingly about how endurance sports saved his life, died after a rattlesnake bite in Golden on Saturday, October 7. His death saddened his friends and loved ones, who poured out their grief on social media, and speaks to the dangers associated with an uncommonly late rattlesnake season.

In 2014, Hohs, a 31-year-old who was originally from the Chicago area, commemorated National Day Without Stigma (October 6) with a post on the ActivePerformance.org website titled "How Endurance Sports Saved My Life." The essay focused on what he referred to as "my unique brain chemistry."

Hohs noted that during his freshman year of college, "I had my first extremely major depressive episode. I spent over three months torturing my brain, struggling to succeed in school, masking my emotions, and dealing with what I thought was stress. In 2005, two weeks before my sophomore year started at the University of Michigan College of Engineering, I was self-admitted to an in-patient psychiatric facility. Why was I in a psychiatric facility? I had a major manic episode that caused me to be awake for approximately three days straight. I then ended up in the hospital where I was given the option to receive help. I chose to receive treatment and help. During that week in the psychiatric facility I was diagnosed with bi-polar disorder, also known as manic depression. I spent the next nine years learning that my alternative brain chemistry is not a disorder and it is not an illness; it is a unique part of me that gives me strength and individuality in so many ways."

Endurance sports helped him gain this knowledge, he continued. "After struggling with another bout of depression stemming from being laid off from my first job and being immobile from reconstructive knee surgery, I decided to commit to training for triathlon. I didn’t know it at the time, but this commitment ended up saving my life. After I completed physical therapy, I jumped into the sport of triathlon. I began taking spin classes, running, and swimming at my local gym. Within a year and a half of knee surgery I was running half marathons and completed the Chicago Olympic Distance Triathlon. I made new friends in the triathlon community who helped encourage me to continue following my new-found passion for endurance sports."

He concluded that "endurance sports have provided me with the motivation to improve all aspects of my life, deeply reflect on who I am, and most importantly, learn that I can do what I once thought was impossible!"

Here's a video of Hohs talking about these issues; it was shared in conjunction with the essay.


At about 12:40 p.m. on the 7th, Hohs was reportedly hiking with a friend just over a mile from the Golden area's Mount Galbraith trailhead when he was bitten by a rattlesnake. His location made it difficult to get help to him quickly, and he was pronounced dead later that afternoon at St. Anthony's hospital in Lakewood.

As soon as the news broke, Facebook tributes to Hohs began popping up. Here are three examples:


I’m so saddened and shocked by this tragic news. I don’t want to believe it is true that we have lost such a friendly and happy going super athlete as Dan Hohs. He and his contagious laugh and smile will be so missed. I was in Finnish woods today thinking of him and how much he appreciated adventures and nature. He told me during one of our bike rides how he would want to explore Finnish Nature and come and swim with me in beautiful lakes in Finland. His spirit will be around everywhere and he keeps inspiring everybody who knew him. RIP Dan

R.I.P., Dan Hohs. Will miss competing against you.

The world lost a beautiful soul yesterday. I water skied with Dan Hohs in college. He was so full of energy, positivity and love! Every memory of him puts a smile on my face. He made sure I wasn't the only "over spirited" person at the water ski tournaments, dressing up in equally if not more elaborate costumes than me! He was often seen wearing his University of Michigan flag cape and frequently had some sort of spirit theme painted on his chest. His personality was infectious. Dan truly knew how to live life to its fullest. He will be missed more than words can describe! I can not believe this happened!!!

Most news reports about fatal rattlesnake attacks in the Denver area tend to arrive in the late spring or summertime. But this year along the foothills, things have been different, as I know from personal experience. I take a daily walk with my Goldendoodle, Lucy, in an open-space area in Ken-Caryl Ranch south of Golden, and over the years, I've tended to see rattlesnakes during the hottest months. However, we had our first rattlesnake sighting just over a week ago, and the second the day before Hohs's death, when I snapped this photo: 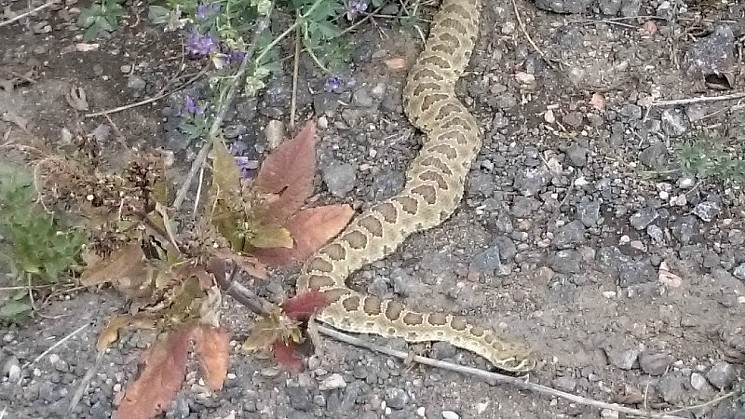 Photo by Michael Roberts
Note that this photo was captured with a zoom. Getting close to a rattlesnake (or letting a dog do so — Lucy was leashed) is a terrible idea, as noted in Denver Health's page about rattlesnake bite prevention. Below, find a list of tips to stay safe in rattlesnake country:

You are most likely to encounter a rattlesnake when walking, hiking, climbing, or camping. You're likely to find rattlesnakes around rocks, shrubs, tall grasses, and brush. They like hot surfaces and you'll often see them sunning themselves on rocks, pavement, or trails.

• Dress appropriately. Most bites happen to the hands, feet and ankles.

• Avoid sticking your hands or feet into holes, thick grasses, and other places where you can’t see snakes that may be hiding.

• Use a flashlight. Flashlights can help you spot a snake on or near the trail at dusk when snakes tend to be active.

• Always hike with a friend.

• Communicate. Carry a cell phone and make sure family and friends know where you are hiking and how long you plan to be gone.

• Stay out of the way. Stay on well-used trails and avoid wandering into tall grass, underbrush and weeds.

• Carry a walking stick. Use the stick to whack bushes and grasses before you walk on or near them.

• Be careful around water. Rattlesnakes can swim. Anything resembling a long stick in the water might be a rattlesnake.

• Move out of the way. If you come across a rattlesnake, calmly and quietly back up so you are out of the snake’s range (at least 5 feet). A rattlesnake's strike distance can be up to one third to one half of its overall length, but don't get close enough to measure the snake's length.

• Leave the snake alone. Avoid provoking a rattlesnake. Avoid poking it, kicking it, throwing rocks, or trying to annoy the snake. A threatened or scared snake is more likely to strike back, releasing extra venom.

• Pay attention when camping. Check your campsite before setting up. Arrive in daylight and set up in daylight. Always check your tent and sleeping bags before climbing in. Close tent flaps when coming and going.

• Be careful when collecting firewood. Piles of wood are an ideal rattlesnake hiding place.

• Avoid letting your dog run freely. Dogs can die if bitten by a rattlesnake. Not surprisingly, dogs are usually bitten on the snout or head.

• Avoid trying to kill or pick up a rattlesnake. A snake may be sleeping. Even dead snakes can "bite" because of a reflex action that closes the mouth injecting venom.

What to Do If Bitten by a Rattlesnake

• Keep the bitten arm, leg, or body part at or slightly below heart level.

• Note the time the bite happened. Avoid trying to capture or kill the snake, but try to remember its color and shape so you can describe it. This can help with medical treatment. If you can do so safely and without delay, take a photo.

• Remove all tight clothing or jewelry.

• Do not cut the bite or try to suck the venom out.

• Leave the bite site alone. Do not use any first aid measures such as applying heat, cold, electricity or any substance to the bite.

• Avoid allowing the victim to drink caffeine or alcohol or take any drugs.

• Transport the victim to a hospital as quickly as possible, but use care and do not convert the snake bite emergency into a traffic accident. It's best to go by ambulance.

• Intense pain spreading out from the bite

• A scratch or puncture(s) from fangs. Sometimes bites only show one fang mark.

• Progressive swelling and bruising where bitten

• Light-headedness or loss of consciousness

Services for Dan Hohs are pending.