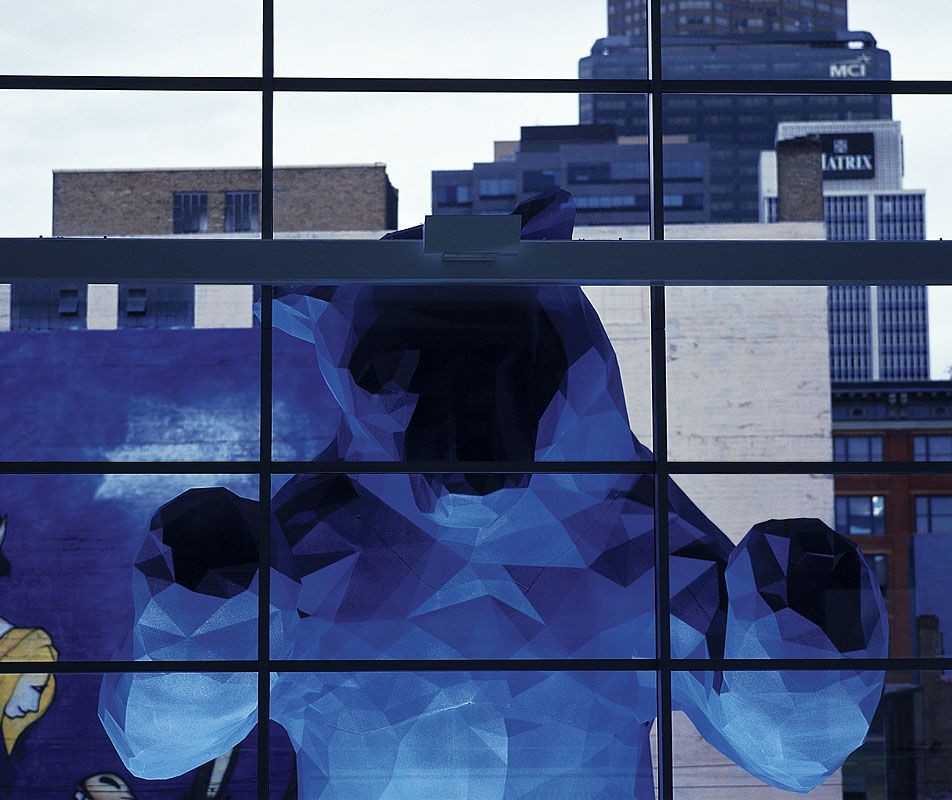 lawrenceargent.com
From almost the moment it was installed outside the Colorado Convention Center a dozen years ago, Lawrence Argent’s “I See What You Mean,” a 42-foot-high sculpture of a big blue bear standing with its back to 14th Street, gazing into the building, became the city’s favorite piece of public art. “I remove as much of the signified purpose of my concept as possible, so that all that is left is the essence,” Argent recently said in explaining his work. “It is this pure incarnation that permits an interaction without expectation; it becomes familiar and hence not intimidating, thereby creating a new possibility for an experience that grows with engagement.”

And people quickly engaged with “I See What You Mean,” giving it a nickname (the Big Blue Bear), pulling pranks (the Ladies Fancywork Society spent a year crocheting a ball and chain to attach to the bear’s leg, dubbing their piece “Slave to the Craft,” while a less decorous artist dropped a pile of blue poo under the bear one night), and even knocking it off.

The city was the first copycat. But after Denver officials discovered that the city’s commission for the original Argent piece did not cover manufacturing little and littler blue-bear statues, they negotiated to secure those rights.

It was a good deal, because those souvenirs have become almost as beloved as the statue itself. Last year, the Visit Denver gift shop sold 2,740 of them, making it the store’s bestseller. They’re also a lot more portable, as Wesley Morgan discovered. Blue in San Diego.
Wesley Morgan
Three years ago, Morgan and his boyfriend were contemplating how best to document their travels. “We don’t do selfies a lot,” Morgan explains. “I’ll be honest: I hate selfie-stick tourists.” Looking around the living room, he spotted the five-inch “I See What You Mean” he’d bought after moving to Denver nearly eight years earlier and into a place near the Big Blue Bear’s downtown lair. He decided to take it on the road, posing the bear in various scenic spots. “He was built for it,” Morgan says. “He’s already looking at things.”

Blue in Barcelona.
Wesley Morgan
That bear’s first trip was to Seattle. It was also his last, but not because he proved a bad traveler. In fact, Morgan decided to give Blue — as he calls the sculpture’s mini-me — away to someone he’d met on the trip, “so his adventures can continue.” And that became part of the project, as did putting Blue’s adventures on social media. “I’m from Tennessee,” Morgan admits. “It wasn’t until a relative told me about Instagram that I put it there.” And #denverbluebear took off fast.

Blue in Playa del Carman.
Wesley Morgan
Meanwhile, an increasing number of bears were going places, too. “We’ve traveled all over the world with miniature blue bears, taking pictures of them in some pretty amazing places,” Morgan reports. “Our bears have met Big Ben in London, walked the path around Stonehenge, had a picnic in front of the Eiffel Tower, partied on a beach in Mexico, and even held up the Leaning Tower of Pisa. And so, so much more.”

He began taking more than one bear on a trip, in case someone they met early coveted the sculpture or a mishap befell Blue. “Those ears go really easily,” Morgan notes. “We shattered one in Portland, broke one in Italy…. Now we always travel with two or three or even four, if it’s a longer trip.” The bears even have their own case.

Sometimes folks from home recognize Blue. In a small town in Italy, a tourist in a Colorado ball cap “knew immediately what we were doing,” Morgan recalls; the man was from Thornton. A woman living in San Diego recognized the bear because her son lives in Denver and had posted his own photos.

Blue in London.
Wesley Morgan
Today the Instagram account has more than 300 photos taken by Morgan, as well as a dozen others submitted by fans. “We’ve just been having a blast with it,” he says. Such a blast that “people ask if I work for the city,” he adds. He doesn’t, but his bears do: Visit Denver now affixes a square blue sticker to the boxes holding the bears it sells, urging owners to use the #denverbluebear hashtag.

Blue in Innsbruck, Austria.
Wesley Morgan
And even on Monday, while Morgan was at work, Blue was on the job as Denver’s most popular ambassador, traveling to Portland with Morgan’s boyfriend, “having adventures right now,” Morgan reports. “He’s really gotten around.” But while Morgan’s job is with the Hudson Group at Denver International Airport, he’s never been tempted to horse around with “Mustang.” Argent’s work has his heart — now more than ever, since the Denver artist died suddenly on October 4.

But Argent lives on in the incredible work he’s created around the globe, including a giant rabbit at an airport in San Diego and a huge panda just installed in China. “We get so many inquiries from around the world, and ‘I See What You Mean’ is always what they start with,” says David Hemsi, Argent’s assistant, who shares this recent quote from the artist: “The journey my work embarks on is always fettered by the essential desire to capture essences.”

And in Denver’s case, the simple bear necessities.

View more of Wesley Morgan's photos and travels with the Denver Blue Bear.