Facebook
A photo of Kremmling, Colorado, as shared on the town's Facebook page.
A federal jury has awarded Vietnam veteran Mark Smith a $760,000 judgment to be paid by the Town of Kremmling and two members of the community's four-person police department, including the chief, over a brutality episode with a long and bizarre backstory. Smith's attorney says the beating Smith took was motivated by what he calls "small-town politics on steroids."

Smith's original complaint, filed in 2015, is accessible below. In the beginning, six defendants were named in addition to Kremmling, a community of around 1,500 people located in Grand County, but by the time the jury heard the case, there were three left: Chief of Police Scott Spade and officers Todd Willson and Robert Dillon.

Here's how lawyer Darold Killmer describes the decade-plus of bad blood that led up to the 2013 incident, as well as the fallout from the mammoth verdict handed down in the U.S. District courtroom of Judge Richard Matsch.

"Mark is a highly decorated Vietnam War veteran," Killmer says. "He enlisted in the war, he wasn't drafted — and he was almost killed a couple of times, so he has post-traumatic stress disorder from his experiences. He's been rated 100 percent disabled from his time in combat coupled with the PTSD and the shrapnel that's still in his body from exploded mines. He's also had two or three strokes, and I don't think it's fair to say he's completely recovered. I think he still has impairments related to the strokes, and he had open-heart surgery, too — and back in 2013, he was 65 years old. So you're talking about an elderly, disabled man."

Originally from Texas, Smith moved to Kremmling in 1997 and purchased a trailer park in town. Killmer notes that "he has fourteen or fifteen trailers there, and that's what he runs. He tries to mind his own business, but upon his arrival, he was treated as an outsider, and city officials began to really harass him in their enforcement of trailer-park codes and laws. And even though Mark's a quiet guy, he's also stubborn. He's a Marine, and when he sees something wrong, he speaks up. So he protested their treatment of him. He went to City Hall, he wrote letters to the chief of police, he wrote letters to the board of trustees, which is their town council, and he even drafted up little lawsuits without a lawyer, all trying to get them to back off."

If that was the goal, it didn't work. According to Killmer, "The more he protested, the more they hated him. Judge Matsch said he was being treated like a 'troublesome outsider.' But he didn't do anything dangerous or wrong, and he didn't hurt anybody — and that's important to mention, because the defendants tried to describe him as this violent, dangerous, unstable Vietnam vet. They conjured up all of these stereotypical fears." 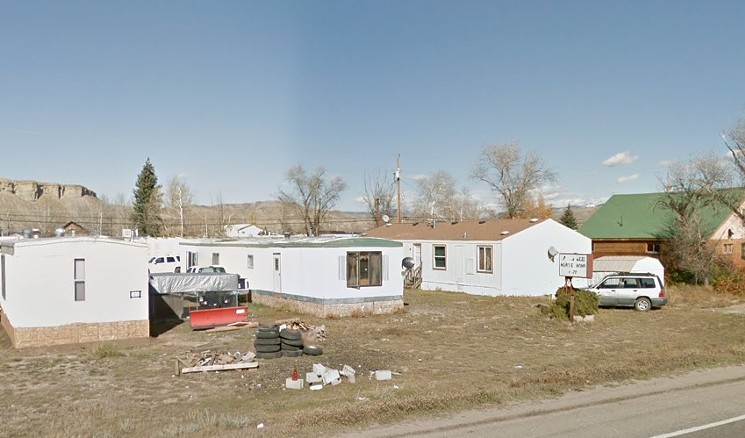 Mark Smith's trailer park in Kremmling.
Google Maps
This characterization provides context for the way authorities belatedly responded to March 3, 2013, events involving Smith and Melody Fairchild, who was both his girlfriend at the time and, Killmer says, "a chronic alcoholic." He notes that Smith "hasn't gone out with her since 2013," but that more recently, "we had to summon her out from Douglas County jail because she was in custody for her fourth DUI. She's a nice lady when she's not intoxicated, but when she's hammered, she gets very violent and angry."

On the 3rd, he continues, "she started screaming at Mark and hitting him with her cane — she'd just had hip surgery — and started breaking things in his living room: his TV and other stuff. So he kind of bear-hugged her and carried her out to the front lawn, and they fell off his slightly elevated porch. Then, afterward, when she'd calmed down, he picked her up, carried her into his bedroom and let her sleep it off, and he spent the night in his shed."

Two days later, on March 5, Fairchild "headed to the liquor store, got more liquor, drank some more and passed out," Killmer recaps. "But in the meantime, she called a friend of hers and said, 'I really need help. I don't know where I am and I'm hurt.' It was kind of garbled, emotional; she was crying. And her friend, who was well-meaning, called 911 and said, 'My friend is at Mark's house and needs help.' She understandably thought this was a domestic-violence concern."

Shortly thereafter, news of the report reached Willson and Dillon, "these two cops who really hate Mark Smith." Killmer contends that "they seized on this opportunity — like, 'We're going to get him now. This is our chance to get Mark Smith.' So they assembled what for Kremmling was this large group of officers — three Grand County Sheriff's Department employees and a Colorado state trooper — for what really should have been a knock-and-talk. They should have just gone to the front door and asked, 'Is Melody here? Is she okay?' But instead, Willson and Dillon told them that Mark was a highly dangerous, reactive guy, which was a lie — and they made it a home invasion."

Dillon "went to the door and said, 'Mark, we're coming in.' Now, this was nine o'clock at night. Mark was making noodles in his underwear, and he didn't have any idea what this was about. The argument with Melody was two days earlier, and he had no idea this was associated with that. He had no idea she'd called her friend and the friend had called 911. So he said, 'Get the fuck off my property.' And at that point, even though they didn't have a warrant, they came busting in. Dillon went in first and Willson came in second with his Taser ready to go — and within six or eight seconds, he's tasing Mark."

The Taser in Willson's possession "had two functions," Killmer explains. "The first shot has barbs in it, and Willson testified that it didn't work — but Mark was on the business end of it, and he said it definitely worked. Then, once the barbs are shot, you can use it as a stun taser, conducting electricity by pressing it up against someone's body. Mark testified that he was tased three times, and it produced excruciating pain."

Before long, Smith was cuffed and in custody, and Dillon and the trooper, Nathan Lyons, headed to the bedroom, where Fairchild was asleep after another booze binge; she registered a .434, more than five times the limit for legal intoxication, in a subsequent blood-alcohol-content test. As Killmer tells it, "They woke her up and asked her about Mark, and she said, 'I wasn't hurt by him. Why are you arresting him? This is wrong. You shouldn't be doing this' — all these spontaneous statements about him being innocent." However, "she was so intoxicated that Trooper Lyons went to call an ambulance, and Officer Dillon stepped in and basically talked Melody into saying Mark had hurt her. And that's all they needed." 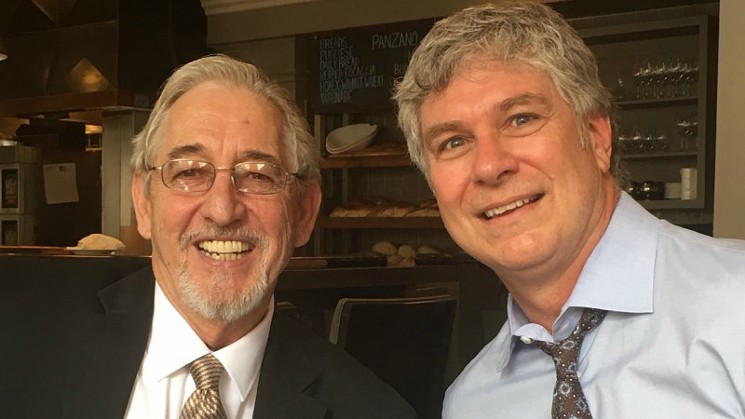 Mark Smith and attorney Darold Killmer after the verdict.
Photo courtesy of Darold Killmer
Afterward, Smith was charged with attempted assault on a police officer, a felony, plus three misdemeanors: resisting arrest, obstruction of a police operation and a domestic-violence charge. But, Killmer says, "Trooper Lyons, who wasn't beholden to the Kremmling police or even the Grand County Sheriff's Department, gave a statement that he'd been duped. He said he'd been told as a predicate going into the house that this was a dangerous guy who's going to respond violently, which wasn't true, and he also testified that the Kremmling police talked Melody into saying Mark had hurt her. And the district attorney in Grand County refused to sign off on the charges. Everything was dismissed."

The lawsuit came along in 2015, "and for the past two and a half years, we've been slugging it out in the pre-litigation process," Killmer maintains. The trial took a little over a week, with both Fairchild and Trooper Lyons testifying on Smith's behalf. Ultimately, the jury cleared Dillon, "but they found in favor of Mark against Willson and against Chief Spade, who wasn't on the scene that night but who they'd consulted; they said, 'This is what we're going to do,' and he said, 'This all looks good to me.' Chief Spade probably had the longest, most negative relationship with Mark, because he'd been a thorn in the side of the town council, and Spade was often dispatched to serve summonses on him. And the jury also made a separate finding that what happened should be attributed to Kremmling itself, which was a significant legal finding. A lot of these cases come down only against the officer, but not the municipality. But in this case, they put the municipality on the hook."

After the decision was announced, the attorney for Kremmling reportedly said the town is considering all options moving forward, presumably including an appeal. It's also likely that the defense will file a motion to nullify the verdict. But for now, Killmer says, Smith feels exonerated.

"These officials and officers basically told Mark, 'You will not question us, and you'll pay for this' — and they retaliated consistently and aggressively. But the jury said, 'You can't do this. Mark Smith is entitled to the protections in the Constitution — protections that he fought for.'"