Facebook
Amy Griesheimer
One of the most powerful figures in Denver radio has fallen. Amy Griesheimer is out as vice president and general manager for KS-107.5, Alice and three other stations owned by the national media conglomerate Entercom, with observers speculating that the move was made because of ratings and revenue shortfalls in an industry that continues to struggle with the fallout from technological changes and shifting listener habits.

At this writing, we've been unable to reach Griesheimer, and Entercom has offered no official comment on the move. However, a knowledgeable source reveals that Doug Abernathy, one of Entercom's regional vice presidents, will serve as acting general manager for the Denver cluster, which also includes 99.5 The Mountain, Cruisin' 1430 KEZW and Comedy 103.1 KQKS, while a nationwide search is conducted for Griesheimer's replacement.

Griesheimer has been a power player in Denver radio for more than two decades. Her LinkedIn page notes that she's served as vice president and general manager of Alice for 23 years, beginning in 1994, and her responsibilities over the entire Entercom station group in the market began in the early 2000s.

Much of her success has been tied to the popularity of recent Westword interview subject Jamie White. Indeed, two days after the publication of our June 27 profile, Griesheimer announced that she'd signed White and current co-host BJ Harris to a new five-year contract. "We are thrilled to have BJ and Jamie stay part of the Entercom/Denver family and continue building on their long track record of success!" she said in a statement to AllAccess.com. 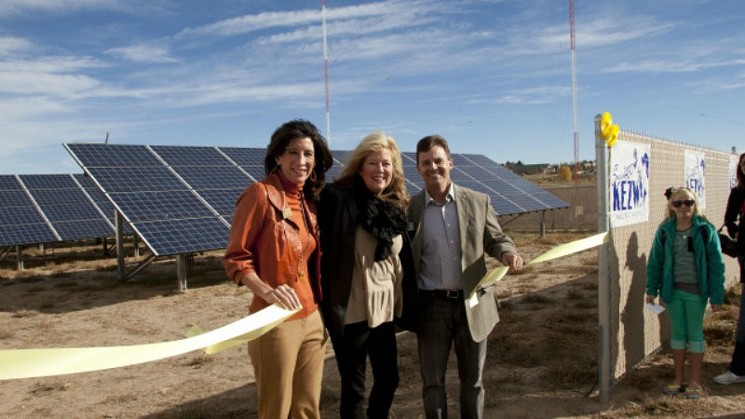 Amy Griesheimer, center, at a 2012 appearance on behalf of KEZW.
CBS4
Meanwhile, though, there was turmoil at KS-107.5, as noted in today's Q&A with Kendall B, who's just taken over the morning slot at JAMMIN 101.5. Kendall B, who partnered with Larry and Kathie J in the A.M. drive-time slot for fifteen years, was abruptly sacked in January. Then, in March, Larry and Kathie J left the station after a contract dispute. Griesheimer subsequently gave her blessing to a new morning team made up of KS-107.5 veterans Tony V, Cedes and DJ Chonz — a combination that Chonz conceived.

Now, with Griesheimer gone, the future for staffers at KS-107.5 and its four sister stations suddenly looks hazy — and the same can be said for the terrestrial radio business in general.

The stories about corporate cost-cutting demands, tightened budgets and behind-the-scenes tensions we've been hearing about Entercom's Denver properties are echoed at plenty of other commercial outlets. More and more young listeners are abandoning old-school radio in favor of satellite stations or streaming services such as Spotify, leaving behind an aging demographic that's less appealing to advertisers — and profits are suffering as a result.

That leaves the executive who'll eventually take charge of KS-107.5, Alice and the other three Entercom stations with a difficult mission — one that's just knocked Griesheimer off her perch after nearly a quarter-century in Denver radio.