pollvogtarian.wordpress.com
A graphic of the sort used by Amendment 2 critics during the early 1990s.
Twenty-five years ago today, Colorado voters approved Amendment 2, whose backers portrayed it as outlawing "special rights" for gays, lesbians and bisexuals. The measure's passage on November 3, 1992 provoked outrage nationwide, with Colorado's branding as the "hate state" resulting in boycott calls from singer Barbra Streisand and other members of the national entertainment community. But while Amendment 2 was deemed unconstitutional by the U.S. Supreme Court in a landmark 1996 ruling, a University of Denver professor sees its legacy in the current Masterpiece Cakeshop controversy and other cases she considers to be problematic on every level.

"What I find really fascinating about Amendment 2," says DU's Kris McDaniel Miccio, "is that we're reliving it again in 2017."

McDaniel Miccio has a unique perspective on Amendment 2. She was among the plaintiffs in lawsuits to end Colorado's same-sex marriage ban, and she's a central figure in a complaint filed by the Equal Employment Opportunities Commission against DU for allegedly paying not just one or some of its female full law professors less than the mean average salary of male full profs at the law school, but all of them.

This background helps explain why McDaniel Miccio has been invited to speak about Amendment 2 and its legacy, among other related subjects, at England's University of Oxford. She's in the midst of researching an article about the subject, too. Working title: "Religious Fascism and Conceptions of Equality for the LGBTQ Community."

The main text of Amendment 2 reads as follows: "Neither the State of Colorado, through any of its branches or departments, nor any of its agencies, political subdivisions, municipalities or school districts, shall enact, adopt or enforce any statute, regulation, ordinance or policy whereby homosexual, lesbian or bisexual orientation, conduct, practices or relationships shall constitute or otherwise be the basis of or entitle any person or class of persons to have or claim any minority status, quota preferences, protected status or claim of discrimination. This Section of the Constitution shall be in all respects self-executing."

Back in 1992, McDaniel Miccio was living in Brooklyn — but she clearly felt the impact of Amendment 2 from more than half a continent away. "I read an article in the New York Times about it, and my reaction was basically, 'Oh, my God, what is wrong with Colorado?' They were talking about not wanting to give gay people special rights, but they were doing it by basically taking away rights, which I thought was very interesting — the idea that equality for gay people required special rights. Everybody held their breath wondering if this was going to catch fire in other states, as well as Colorado. Thankfully, in New York, it didn't — but in other states, it did." Indeed, a 1993 Boston College Law Review article noted that "groups in many other states are preparing and promoting similar measures, and more will surely join in if the courts uphold Amendment 2." 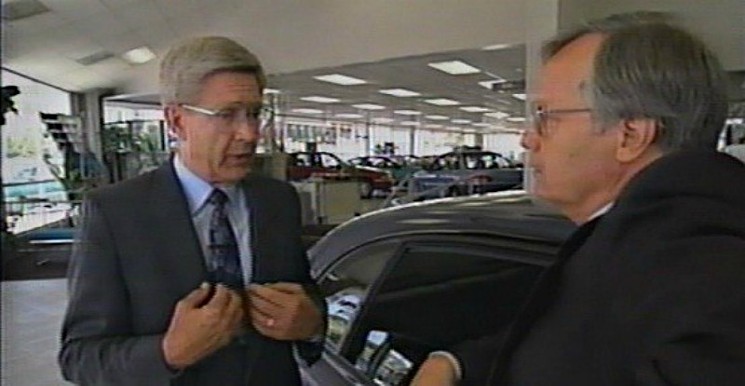 Will Perkins, Amendment 2's chief proponent, during an interview with Bill Moyers.
File photo
That didn't happen. Will Perkins, a Colorado Springs car dealer who was Amendment 2's main proponent, insisted that the proposal's language wasn't discriminatory — but in Romer v. Evans, the resulting U.S. Supreme Court case, six of the nine jurists rejected this spin. Writing for the majority, Judge Anthony Kennedy maintained that "it is a fair, if not necessary, inference from the broad language of the amendment that it deprives gays and lesbians even of the protection of general laws and policies that prohibit arbitrary discrimination in governmental and private settings...." He added that the measure's "sheer breadth is so discontinuous with the reasons offered for it that the amendment seems inexplicable by anything but animus toward the class that it affects; it lacks a rational relationship to legitimate state interests."

In McDaniel Miccio's view, Kennedy and the court majority essentially found that Amendment 2 "denied equal protection to the LGBTQ community — and let me give you an example of what it would have done. Let's say for the sake of argument that the University of Denver decided to discriminate against me, not because I'm a woman — which they have — but as a lesbian. Under Amendment 2, I wouldn't be able to do what I'm doing now, which is to sue DU, because I couldn't do it as a lesbian."

As such, McDaniel Miccio feels that Kennedy's Amendment 2 opinion helped lay the groundwork for Obergefell v. Hodges, the 2015 case that established the fundamental right to marry for same-sex couples. She agrees with the late Justice Antonin Scalia that "Obergefell opened a door, as did Windsor" — 2013's United States v. Windsor, which nixed the Defense of Marriage Act. "And I'm very glad it did, because it put the LGBTQ community on equal status with heterosexuals. That's all we're asking, or demanding — and if your religious beliefs don't accommodate that, it's perfectly fine as long as you keep it within your own religious community."

Kris McDaniel Miccio has a unique perspective on Amendment 2.
File photo
Problem is, other recent U.S. Supreme Court decisions have, in her view, sanctioned discrimination based on faith — notably 2014's Burwell v. Hobby Lobby Stores, Inc., which exempted owners of corporations from certain regulations (paying for birth control services, for instance) to which the owners have religious objections. And she fears the same thing could happen with the upcoming U.S. Supreme Court ruling related to Masterpiece Cakeshop, whose owner, Jack Phillips, has sued for the right not to make wedding cakes for same-sex couples because such matches are objectionable to him from a religious standpoint.

If the justices rule in favor of Masterpiece Cakeshop, she asks, "does that mean you can put things in the window that says, 'We don't serve the LGBTQ community'? Is that what we're coming to?"

These questions suggest to McDaniel Miccio that Amendment 2 isn't yesterday's news, but a harbinger of a potentially dark future.

In her view, "the election of Trump has allowed for the privileging of religion over equality. His religious-liberty executive order basically expanded Hobby Lobby beyond not just sincerely held religious beliefs to moral conscience, which is not only offensive to me as a lesbian, but it's also offensive to me as a moral person. Thinking that it's perfectly appropriate to discriminate against the gay, lesbian and transgender community if you call it a moral decision is one of the most immoral things I've seen. What the Trump administration has done is give permission to a very narrow conception of Christianity that most mainline Christians find completely unacceptable, and primatizes that position of Christianity above all others."

To McDaniel Miccio, these developments are disturbing — and they contain an echo of what took place in Colorado 25 years ago.