Facebook
A Facebook photo shows former Fox News personality Eric Bolling with his son, Eric Bolling Jr., on the CU Boulder campus.
In September, University of Colorado Boulder student Eric Bolling Jr., namesake of former Fox News personality Eric Bolling, became the second celebrity son to die of an overdose in Colorado during a 41-day period. The tragedy underscored the rising number of opioid fatalities in the state. But this week, Bill O'Reilly, a onetime Fox News superstar who some observers believe was the biggest jerk in Denver TV history, put a new spin on the younger Bolling's death, suggesting that it may have been caused by his father's departure from Fox News following claims of sexual impropriety.

This assertion resulted in castigation from the elder Bolling, who says his son's death was accidental, as well as a rare apology from O'Reilly.

As noted in our previous coverage, we've been reporting about overdose data throughout 2017. In March, we revealed that heroin-related fatalities in Denver had jumped a staggering 933 percent since 2002, according to numbers assembled by the Colorado Department of Public Health and Environment. Moreover, this increase has been nearly as steep on a statewide basis. During the past fifteen years, fatalities related to heroin in Colorado as a whole were up 756 percent, and they've kept escalating during the past three years even as heroin deaths in Denver have leveled off.

The following month, the CDPHE issued a disturbing new report showing that heroin deaths in Colorado doubled in four years despite an enormous increase in seizures and arrests related to the drug over the same interval. Among the factors for the rise cited in the document, titled "Heroin in Colorado," was the price, which tumbled by over 60 percent during a two-year period.

In addition, contributor Jackson Barnett zeroed in on the heroin problem at the University of Colorado by taking readers inside two CU Boulder students' struggle with addiction for a June feature article. 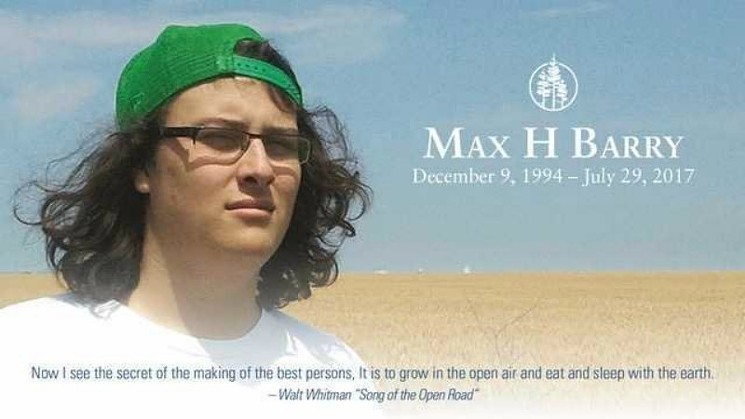 A memorial image honoring the late Max Barry.
Facebook via Fox31
Colorado and overdoses were brought together again following the July 29 passing of Max Barry, 22-year-old son of Nashville Mayor Megan Barry, in Littleton. Max's death was confirmed in the following statement from Mayor Barry's office, which reads in part:

"Early this morning, we received news that no parents should ever have to hear. Our son Max suffered from an overdose and passed away. We cannot begin to describe the pain and heartbreak that comes with losing our only child. Our son was a kind soul full of life and love for his family and friends.

"Our family would greatly appreciate your thoughts and prayers, and would respectfully ask for privacy as we mourn the loss of our child and begin to understand a world without his laughter and love in our lives.

"Max Barry, age 22, graduated in June from the University of Puget Sound. Max attended Eakin Elementary School, West End Middle School, and MLK High School before attending and graduating from University School of Nashville. He is survived by his parents, as well as grandparents Joyce Brody, Jan Mueller, and Ken Mueller."

An autopsy noted Barry's cause of death. His system contained alprazolam, methadone, hydromorphone, THC and cocaine, a cocktail that resulted in cerebral and pulmonary edema exacerbated by obesity and other factors.

As for the September 8 death of Bolling Jr., it immediately followed news about his father's parting from Fox News. The network canceled The Specialists, a program created by the older Bolling, after an investigation found that he'd sent lewd text messages to female co-workers. He split mere months after O'Reilly, who was sent packing by the network in April. 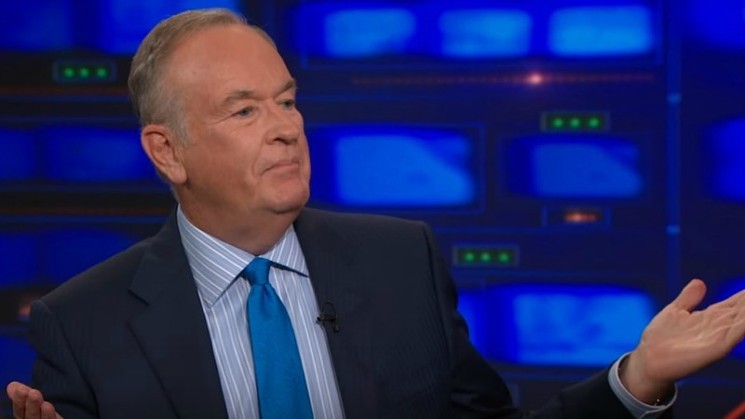 Bill O'Reilly during an appearance on Comedy Central during his Fox News heyday.
YouTube file photo
Around 2:20 p.m. on September 9, Eric Bolling tweeted about his son's death. The message reads: "Adrienne and I are devastated by the loss of our beloved son Eric Chase last night. Details still unclear. Thoughts, prayers appreciated." In a second message shared just shy of an hour later, he wrote, "Authorities have informed us there is no sign of self harm at this point. Autopsy will be next week. Please respect our grieving period." And at 9 a.m. on September 10, he added, "We are overwhelmed by the love and support we have received. Adrienne and I thank you all and ask that you please keep us in your prayers."

The death of Bolling Jr. moved back into the news yesterday, October 23, when O'Reilly responded to a New York Times report that he paid an accuser $32 million shortly before Fox News inked him to a new $25 million per annum contract. "I urge you to think about what you put in your newspaper," he told the Times. "Eric Bolling's son is dead. He's dead because of allegations made — in my opinion and I know this to be true — against Mr. Bolling."

Afterward, Eric Bolling put O'Reilly on blast in a statement to the paper. He wrote: "I believe it is beyond inappropriate for anyone to bring in the tragic death of my son Eric Chase Bolling. Just as Bill O'Reilly had wanted to shield his children from the allegations against him, I hope he will honor my request and avoid any future mentions of my son. My parting from Fox News was in no way connected to the tragic news of my son's passing. The coroner has in fact indicated to us that they believe it was an accident. Unlike others who left Fox News amid public allegations and extensive investigations, I parted ways with Fox News in an amicable way and any reference to a firing is flatly wrong. I have been working on new collaborations which I will be announcing in the next few months."

The assertion about the death of Bolling Jr. being an accident has not yet been corroborated by the Boulder coroner's office; no autopsy report has been released at this writing. But O'Reilly was chastened anyway. At 4:50 p.m. on the 23rd, he tweeted, "Apologies to Eric Bolling and prayers for him and his family. The message I tried to send was that allegations harm kids. Nothing more." In a follow-up message, he added, "Eric Bolling is a stand up guy who deserves the respect I have for him."

That may be the most magnanimous response O'Reilly has received in months.