Kevin Savoy on the Seventy-Year Legacy of Gaetano’s 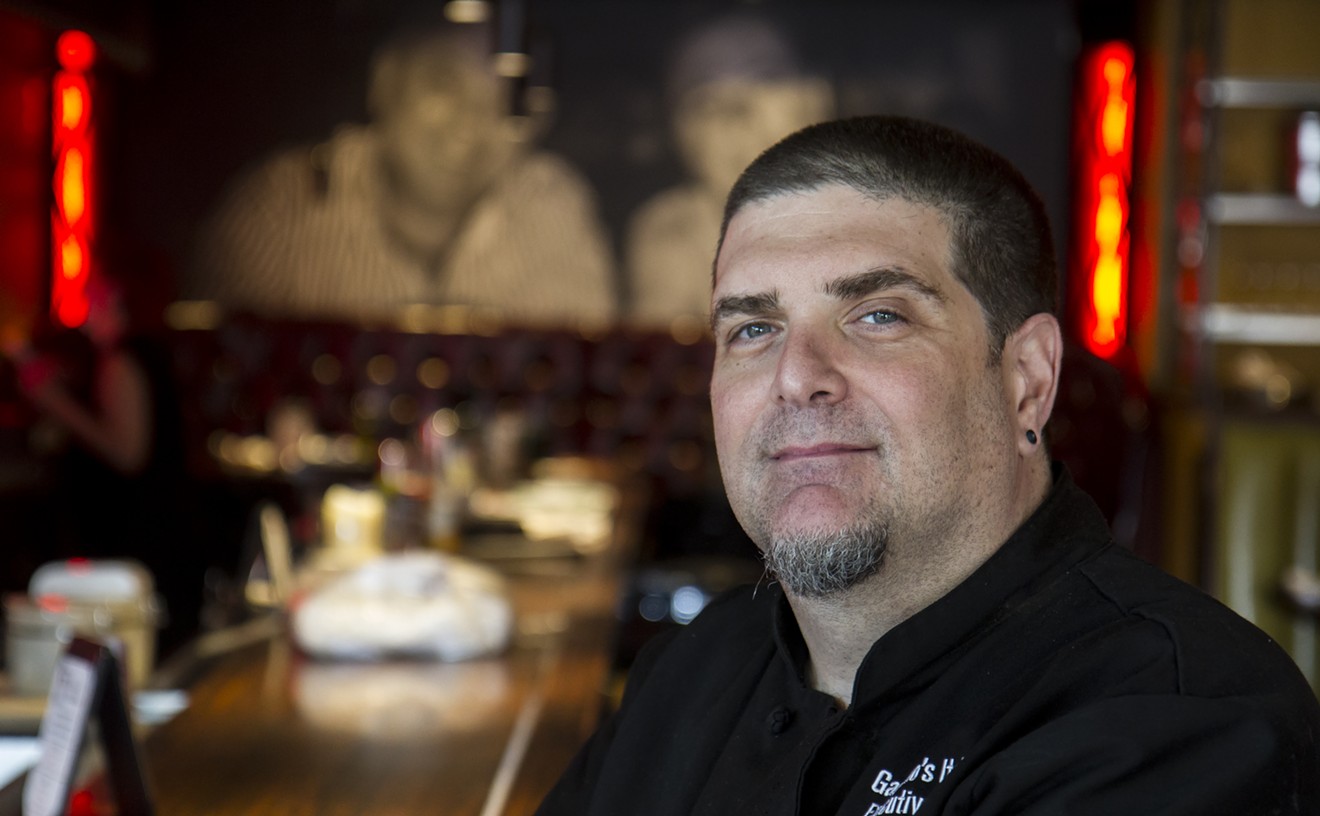 Courtesy Gaetano's
Kevin Savoy draws on seventy years of history at Gaetano’s.
When the Smaldone family opened Gaetano’s seventy years ago, it was an anchor in an Italian-American neighborhood, and the center of enough illicit activity that the owners installed bulletproof glass at the entrance. The Wynkoop Group bought the property in 2005, remodeling the joint before turning it over to Ron Robinson, a longtime member of their team, in late 2013. Robinson has kept the red sauce flowing, even as other Italian mainstays in the area have dried up. From November 7 through November 11, Gaetano’s will celebrate its seventieth birthday with mob tours, special tappings and a mob-night costume party. But in advance of those festivities, Kevin Savoy, who took over the kitchen a year ago, has rolled out a new menu, the first at Gaetano’s in four years. In this interview, Savoy talks about what it’s like to take over a kitchen with seven decades of history, how Denver has changed over his nearly three-decade-long career, and why some dishes will always stay on the menu at Gaetano’s, even as others evolve for a changing neighborhood.

Westword: This restaurant is coming up on its seventieth anniversary. How do you approach refreshing the menu while remaining true to its roots?

Kevin Savoy: It was refreshing coming to Gaetano’s — there’s a specific client base here. We’re keeping the old supper club, old-school Italian feel, but injecting some other modern Italian. In the Highlands, you’ve got old-school and you’ve got younger people. We have to get everyone to dance.

So what changed and what stayed the same?

We’ll always have the piccata, marsala and gnocchi; the lasagna has been the same recipe for seventy years. The Caprese salad is classic. When I first got here, I thought, in the wintertime, how much Caprese could we be selling? Well, a ton. People know when they come here what they want to eat. But this is the first time that Ron [Robinson] allowed a menu change. Pizzas, especially at nighttime, were taking forever. Our kitchen is small, and the pizza oven is small. If we get four or five orders for pizzas, the last pizza could take 45 minutes. We started doing flatbreads using the classic Smaldone dough, but adapting to a smaller size. It’s a little more refined. I’m using a different meatball recipe; the Smaldones were doing veal, beef and pork, and I went back to that original format. We’re doing fresh pastas — fettuccine, pappardelle with the Bolognese, lemon-ricotta tortellini, gnocchi. It’s a mix of old-school and new Italian.

Do you get customers in here asking for old menu items? Can you still make those dishes?

We always try to accommodate. We don’t want to be making anything from the old menu, but if we have the product, we will. We don’t do the vegetable lasagna, because we can’t make that on the fly, so we try to steer people toward vegetarian tortellini. With the really old stuff, I don’t have access to any of the old menus — so those decades in the ’60s or ’70s, I don’t really know what happened here. I can guess and talk to people, but if you asked me what the best-selling dish was in the ’50s, I’d have no idea.

Has it been challenging to fall into the rhythm of a place with so much history?

It’s about getting to know your regulars — taking the time to say hello and getting them to trust that they’re going to get quality food, service, atmosphere. And then you want to create a little to draw a younger crowd, so that good experiences snowball into other people wanting to check us out. Our first challenge was how to get busy; now that we’re busy, how do we control the experience? Are we table-touching? Are the plates warm? People will wait for good food, but it’s got to be hot and good when it gets to the destination.

Talk a bit about your culinary history. How did you wind up here?

I had always been cooking as a young man. I had friends in the industry when I was younger, and they explained the fast pace. I got a couple of jobs dishwashing and doing some prep. The first place I ever worked, when I was fifteen, the kitchen manager drank a lot of booze, and one night, he followed me around and chased me home. My mom came out of the house and said, “I think it’s better if my son doesn’t work there anymore.” But I fell into more serious positions as I got older. My friend worked in Cherry Creek in the early ’90s. He said, “You’re interested in cooking — why don’t you come down here to work in a real kitchen?” I learned about how to build Italian contemporary food. Over the years, I worked with Tyler Wiard, Matty Selby, Frank Bonanno. I played punk rock for 25 years, so I was always skating between music and food. But when I became the chef de cuisine at the Fourth Story, I took a more serious approach. Tyler had come on board as executive chef, and we had some fun making food. Then I opened Agave as the executive chef. I worked at the Renaissance Hotel. It was a corporate setting, and it wasn’t the kind of chef I wanted to be, so I went to Max’s Wine Dive. I came on as executive sous-chef and went to train in Texas. Then our chef just quit, and they asked, “Are you interested in taking over?” I worked there for about a year and then went to work at Carbon and Habit, where I ran doughnuts and food. After that, I went to work for Early Bird, which is a breakfast place in Westminster. I have a daughter, so it was nice to have nights free. I’d been talking to Ron a bit here and there, who was looking for a chef [for Gaetano’s]. The food cost was high, labor was high. He showed me the model and wanted help. Here I am, a year later.

How has Denver evolved over your time in the industry?

When I first started cooking seriously, the industry was really cutthroat — everyone had their techniques and secrets, and everyone was fighting for their territory. I remember when Goose [Sorensen] got Solera out on Colfax and Mel Master started getting Mel’s up and going. Now the Denver market is more open; it’s more inviting. Diners are a lot more savvy. It’s an exciting time. It’s never been more of a sharing town than it is now. Look at Frank Bonanno: He has ten restaurants now, he’s on the move and he’s kind to his staff. Having a person like that in town delivers a message about food, crew and ideology. A lot of us are taking a lead from that. We want to carry on that excitement.

This neighborhood used to have many red-sauce Italian joints, but you’re one of the last standing. How has that affected what you do?

We’ve assimilated a lot of crew from Patsy’s and the Saucy Noodle. We learn from them; we ask them, what was in your sauce? It’s a nice collaboration. That whole old-school Italian community is still here and it still flourishes. We see people come in for mob tours, and they’re coming back to the neighborhood. They lived here in the ’50s and moved out of town. A lot of those bonds are still here. We’re one of the last strong spots.

Any childhood food memories that have had an impact on you?

My mom was a good house cook — she used to put dill in eggs, though, and I didn’t like that. She used to braise pork chops in tomato sauce, and she taught me how to make polenta and carbonara. I made meatballs with my grandma. My grandparents met on Ellis Island in the ’50s, opened a restaurant. They were Italian but changed their name to Savoy because everyone liked the French.

I do basic things at home — kid-friendly stuff. Baked mac and cheese, meatloaf, burgers, gnocchi, chili, grilled cheese and soup. My kid has a decent affinity for cooking food. I don’t want her to be a chef, though; I want her to make better money and have a better quality of life.

Red wine. Ron’s getting me into whiskey tasting. I’m trying to find my palate for white wines. But I always like a nice glass of wine.

What’s always in your pantry or refrigerator?