Facing West has yet to check off the hallmarks of an up-and-coming Denver band. The acoustic-leaning alt-pop duo has never played the Larimer Lounge, never been nominated for a Westword Showcase. Neither member will be able to step foot in the hi-dive for several more years. Yet Facing West has amassed a supportive worldwide audience — 85,000 likes on Facebook, 59,000 Twitter followers, 119,000 Instagram followers, airplay of its new single, “Messed Up Masterpiece,” on 93.3 KTCL — not bad for teenagers living with their parents in Lakewood.

We chatted with Caitlin and Sidney Powell, the sisters who make up Facing West, to find out how they built such an audience, how they fit into the local scene and to defy them to melt our icy cynical hearts. The Powells speak as though sending exclamation-ridden text messages, with rampant energy and humor, talking over and playing off each other. It’s often hard to tell their voices apart over the phone, a sibling seamlessness that translates into their harmony-laden tracks.

Caitlin, nineteen, and Sidney, sixteen, grew up in Florida and South Carolina before their family moved to Lakewood in 2012. In Colorado, the Powells embraced the outdoor Rockies lifestyle. “As a kid, I just wanted to eat snow,” Caitlin says. “Now we’re on the slopes every weekend. Colorado is unlike any other place.”

Beyond shredding powder, the sisters got more serious about playing guitar about six years ago. The idea of starting a band, however, was out of the question. “We were solo artists,” Sidney says, “because we weren’t close. We didn’t get along.” It wasn’t until their mother asked the sisters to sing a song together for her as a Christmas present that they agreed to work together. The success of that collaboration led to Caitlin and Sidney writing and performing together more and more, graduating from one-offs at local open mics to three-hour sets. They busked on Pearl Street in Boulder and played lineups with heavy bands, where they “learned to sing louder.” Now, they say, they’re “best friends.”

“On stage, sometimes I’ll forget a verse, and I’ll give [Caitlin] a terrified look,” Sidney says, “and then she’ll just sing it. That’s really why we have to be in a band, because I can’t remember lyrics.”

Okay, this is getting pretty goddamn cute. But the Powells say their sunny music also tries to get at the shadows. Caitlin says that the band’s motto is “808s and banjos,” but the songwriting will always be driven by “honest, emotional lyrics.” Caitlin cites Imagine Dragons as a major influence for how the band “brought in mandolins to big productions.”

“We grew up on Switchfoot and NEEDTOBREATHE, so music that was heartfelt and kind of alternative, but focus on live instruments and pop beats,” says Sidney. Those two Christian bands point to the Powells’ religious upbringing, in which they “grew up singing in the church.” The sisters say that since they write from personal experience, religion sometimes comes up, but they want their music to reach the broadest possible audience. 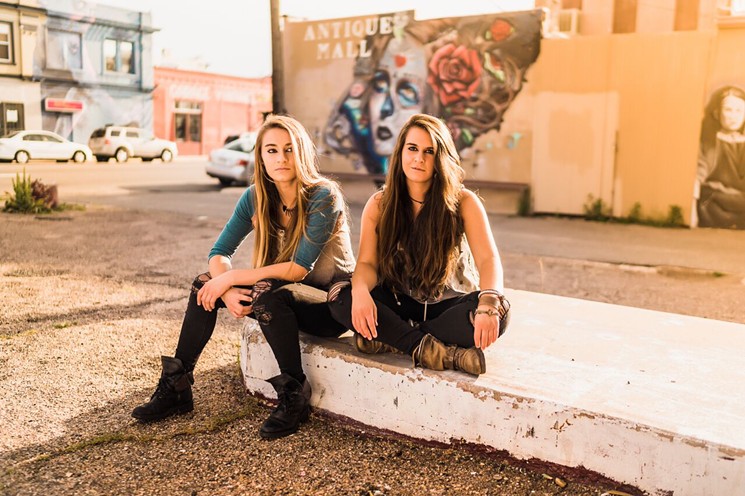 Sidney and Caitlin Powell are Facing West.
Courtesy of Facing West
That eye for growing an audience sharpened in 2015, after Facing West spent the summer on tour, playing fifty shows around the region. According to Caitlin, by the end of that run, the band wasn’t making money, and they needed to figure out how to grow over the winter.

“At the show, people would come up and say they loved the music, but they wouldn’t engage afterwards,” Sidney says.

“We started a YouTube channel to keep talking to people who like our music,” Caitlin says. As the sisters taught themselves elements of production in a studio over their parents’ garage, it turned out that they “adore creating covers and videos,” Caitlin says.

Facing West moved from connecting with listeners and fellow artists on YouTube to making music available on Spotify, which they also approached with savvy. “If you get 250 followers on Spotify,” Sidney explains, “then you get verified and get put on playlists.”

When asked about social-media strategy for artists, Facing West offers a few big tips. First, content attracts followers, and it doesn’t have to be perfect. “Supporters love to see your growth,” Sidney says. Second, the musicians are committed to showing gratitude online, though it takes a lot of time: “We want to thank everybody who takes time out of their day to say something to us. We don’t take it for granted.” Finally, Caitlin says, “When you have questions about growing your social, Google has the answers. Somebody has posted about it.”

In fact, Facing West Googled its way to its latest musical partnership. The Powells are big fans of Tennessee-based YouTube singer-songwriter Jacob Whitesides, and so looked up his producer, David Spencer, then sent Spencer a direct message on Twitter. This cold contact led to a long-distance collaboration, co-writing songs via Skype, and a trip to Nashville to record. The result was a series of new singles that Facing West will release online over the next several months.

While this online meeting led to real-life collaboration, Facing West has plenty of experience navigating Internet creepiness. “You definitely get hate and creepy comments,” Caitlin says.

“Especially since we have a younger fan base,” Sidney adds, “we want to protect other people who just want to listen to music. Even though it can be hurtful, you can’t take it personally."

“There’s always a block button,” Caitlin says. “Then I can talk it out with my mom.”