Chef and steak expert Tyler Wiard didn't take long to find a new home after his departure from Elway's earlier this month. The TAG restaurant group, headed by chef/restaurateur Troy Guard, just announced that Wiard has joined the team as executive chef of Guard and Grace, the group's upscale steakhouse at 1801 California Street.

Wiard started at Guard and Grace a week ago and is in full learning mode. "Guard and Grace is a beast; it's a monster," he says. "And it would be foolish of me to do anything different right now. I'm training and enjoying it." 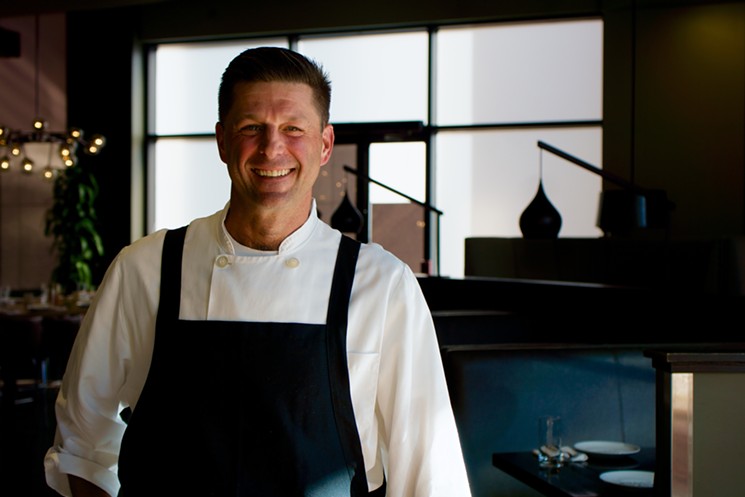 Chef Tyler Wiard joins the TAG team at Guard and Grace.
TAG Restaurant Group
Wiard's looking forward to adding his own creative touches to the menu down the road, and to helping Guard continue to build his restaurant empire. "I respect him immensely for what he's done and for his passion and drive," Wiard says. "There's one word that comes to mind — tenacity — and for me, that's contagious."

Wiard had been with Elway's for more than a decade before the company that owns the locations in Vail and Cherry Creek (the airport and downtown locations are licensed) announced his departure on October 16. "I have nothing but mad respect for Elway's," Wiard notes. "I got to explore so many avenues with that restaurant group, but it was time for a change — and that's okay." 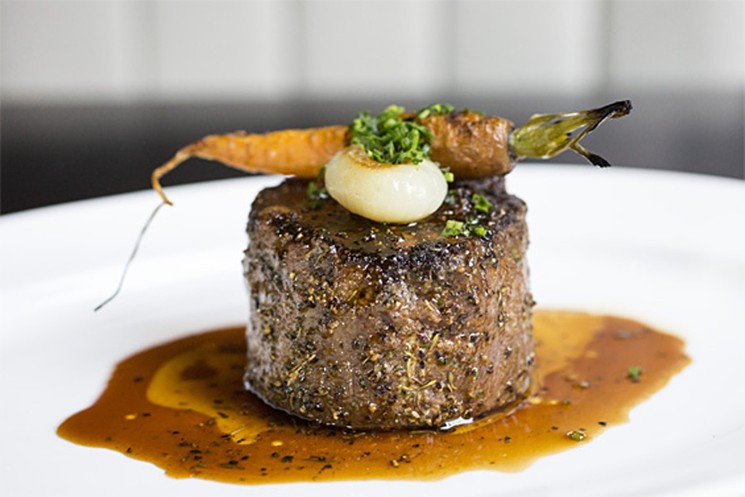 Steakhouse Guard and Grace looks to be a good fit for chef Tyler Wiard.
Danielle Lirette
Given the chef's extensive experience in the Denver restaurant scene, this is exciting news for Guard and Grace customers. Before his tenure at Elway's, Wiard cooked at some of the top restaurants of the 1990s and 2000s, including the Fourth Story (which was on the top floor of the now-departed Tattered Cover Book Store in Cherry Creek), Mel's Bar & Grill (another Cherry Creek legend, run by Mel Master) and Cliff Young's Napa Cafe. As a young cook, he got his start under Dave Query at Q's in the Hotel Boulderado and Jax Fish House.

Wiard counts himself lucky to have learned and grown with so many opportunities, noting that he has good memories from all of them. "And I can't say enough about Mel and Janie Master; I'll be indebted to them for my entire life, both professionally and personally," he says.

Tyler Wiard (left) has been the culinary director at Elway's for years but will now head the kitchen at Guard and Grace.
Elway's
In addition to his career in the kitchen, Wiard was a contestant on season ten of Bravo's Top Chef in 2012 (along with Jorel Pierce of Euclid Hall).

Guard and Grace opened downtown in early 2014 as part of Guard's stable of restaurants that began with TAG in 2009 and has since expanded to include TAG Burger Bar, Bubu, Los Chingones, Hashtag and others. With the executive spot in good hands at his steakhouse, Guard can safely turn his attention to the imminent opening of his next project, FNG, set to debut in November at 3490 West 32nd Avenue in West Highland.