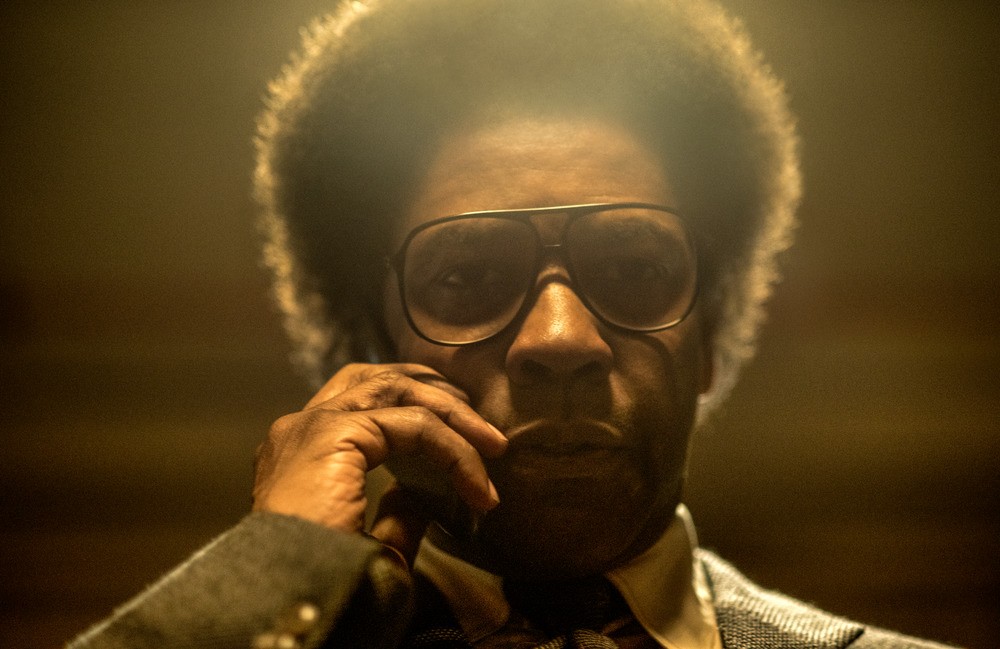 Glen Wilson/Courtesy of Sony Pictures
As the title character in Roman J. Israel, Esq., Denzel Washington plays a bespectacled hero who has dedicated much of his adult life to prepping a suit that he believes could forever change the system.
The writer/director Dan Gilroy has been celebrated for his smartly twisty, agreeably vicious debut Nightcrawler, a terrific thriller-cum-satire that carved up two of the biggest turkey-fat targets in American life: local TV news and the visualize-your-dream ethos of business self-help books and seminars. As Jake Gyllenhaal nebbishly sharked across Los Angeles, shooting crime scenes for a buck, Nightcrawler invited us to wonder what to make of him, to admire his moxie in early scenes and later to recoil in horror when it turned out moxie’s all he has in him — certainly not, like, decency.

Gilroy’s follow-up is another study of morality, this time built around Denzel Washington. But rather than please with its invention or dazzle us with sleight-of-hand plotting, Roman J. Israel, Esq. is quite fearlessly obvious, a character piece about nothing more or less than what it announces in its opening seconds. The film opens in a fit of melodrama, with Washington’s Israel — a stammering, on-the-spectrum revolutionary committed to low-paying legal work despite a certain jurisprudential genius — typing up a legal brief indicting himself for the high crime of selling out.

Then, unpromisingly, Gilroy flashes to weeks earlier, to Israel’s last days as the bookish, office-bound partner in a progressive law firm run by a crusading defense attorney. Often, when a storyteller begins at the point the story will eventually build to, and then doubles back in time, I fear that we’re being told trust us, this will get interesting eventually. Here, the case is the opposite: Israel’s daily life is more interesting than the dramatic stuff to come.

In his downtown Los Angeles apartment, decorated with portraits and paintings of great black artists and activists, he cranks up Pharoah Sanders records to blast out the construction of the luxury lofts next door. At work, he’s happy Post-It-noting a library’s worth of law books, working on a manual typewriter, doing all he can for poor folks facing charges from a system he views as corrupt. But our bespectacled hero is not resigned to that corruption. He’s dedicated much of his adult life to prepping a suit that he believes could forever change the system of unjust sentencing that has led to mass incarceration of African-Americans, but such an endeavor demands more funding than his firm can manage.

In short, this guy is interesting, and as he ambles his car-less way around his city, lugging an aquarium-sized briefcase with his life’s work in it, you might hope that Gilroy has dreamed up a case worth his time and attention — a case that will push him to that frenzied scene that opens the film. Instead, Israel gets cast out of his rut, and then stripped of his certainties. After his partner’s unexpected death, Israel loses his job and must hunt for work. An extraordinary scene finds him weeping during an interview at a nonprofit’s volunteer center. He lays out what he thinks they should be doing, through judicial activism, but can’t avoid insulting what they have been doing instead. Israel’s train of thought is a train — it can’t change course. When the tears start, this asocial man steams ahead, not acknowledging that he’s crying, counting on his interlocutors not to, either.

Later, the woman who has to break it to him that there’s no jobs available — played with touching reserve by Carmen Ejogo — invites him back to give a speech to protesters about strategies for handling arrests. Almost immediately, he pisses people off. It turns out women today don’t like men rattling on about chivalry. The ensuing confrontation is painful and astutely observed, a key incitement for Israel’s eventual rejection of his own values and a challenge to dude viewers. How many proudly liberal men have shut themselves off from the cause once women started talking back?

So, he sells out. He has dedicated his life to bettering the world, and what thanks has he gotten? It’s here that the movie — already quite glum — becomes vague, sometimes even listless. Israel takes a job at a firm run by a sharpie played by Colin Farrell, where he now charges broke-ass clients too much money for defense work. The drama is mostly interior, and Washington’s quiet performance tends to reveal the jittery surface rather than the tortured soul. Neither it nor the script is incisive enough to make Israel’s abandonment of his principles fascinating. Nightcrawler invited us to gape at its lead’s shamelessness, while here Gilroy examines its much less dramatic opposite, Israel’s shutdown embarrassment. That leaves audiences stuck. We spend lots of time watching this guy be disappointed and disappointing, with too many dead stretches in which we can wonder when the plot’s shoes will finally start dropping. How long before we get to the freakout that opened the movie? What will become of that system-changing legal brief he’s still carrying around?

A few scenes concerning the specifics of pleas and charges have a power, and the sequences in which he breaks the law to secure himself a big payday have some city-noir kick. I relished a protracted shot that covered city hall, downtown rooftops and then the alley dumpster onto which Israel has taped an X, signaling the drop point for his score. (The <i>film'</i>s score, of ’70s-vintage funk and jazz, is a consistent pleasure.) And things pick up in a what-would-you-do? way when he spends some of the cash on minor extravagances: a hotel room on the Santa Monica pier, some beefy headphones to replace his spongy old ones.

The best stretch comes late. As his crime catches up with him, Israel sets out on a panicked road trip, and Gilroy demonstrates the skilled hand at roadway suspense that distinguished Nightcrawler. But all through the story of Israel’s selling out, I fear, my mind kept wandering to the dramatic possibilities of the story of how he came to be — or what could happen if he tried to right what he’s done wrong. All that said, Gilroy has come up with one arresting motif that I expect will resonate with many in Hollywood: The revolutionary doing grunt work while dreaming of getting the money together to push through the project the world needs. Roman J. Israel, Esq. is neither, but at least he’s trying.