Jenna Saint Martin
Chris Coleman is the Denver Center for the Performing Arts' new artistic director.
Chris Coleman, artistic director for Portland Center Stage for the past seventeen years, has been hired to lead the Denver Center for the Performing Arts Theatre Company. He starts officially in May 2018 and will be moving to Denver with his husband, Rodney Hicks, whom Denverites saw as Edmund in the 2007 production of King Lear. Coleman brings to the position passion, energy and an expansive and eclectic taste in plays. At the moment, he has been exploring the culture of both the DCPA and the city.

There are "several things here at the center I'm sympathetic to," he says in an interview, "and some I want to extend or modify. There's a history of classics here. I've directed more Shaw than any other playwright, and I love Shakespeare." At the same time, he adds, "I love working on new plays."

One of Thompson's signature achievements was an annual New Play Summit, which attracted writers, critics, directors, tech experts and theater lovers from all over the country. Playwrights came to Denver with works in progress and were given two weeks of rehearsal and rewrite time, along with use of the theater's impressive resources to develop the final product. One or two of the finished works would be chosen for full production in the following year. Important work by playwrights like Jason Grote, Samuel D. Hunter and Octavio Solis emerged from these summits. "This is going to be a priority," promises Coleman, "and I hope we can expand on it."

What else can Denver expect? "I love plays that need an audience's imagination to finish themselves," he says. "I think what television and film do well is photographic, super-naturalistic; what I want is something more theatrical or imaginative, something that asks the audience to finish the story."

As an example, he cites Astoria, a two-part play he adapted for his Portland theater, staging the first half last year. It's "from an epic book about a harrowing survival story. In the book itself, there are ships, people drowning at sea, climbing mountains in the snow, canoeing down rivers — all impossible to do on a stage. You can't do it literally. You have to find an image, a way that evokes, that gives the audience enough clues, whether sound or choreography."

He mentions eminent director Adrian Hall, who liked to quote Viola's question in Shakespeare's Twelfth Night after she's been shipwrecked and has washed up on an unknown shore: "What country, friends, is this?" And the answer: "This is Illyria, lady." That's all it takes in Shakespeare, Coleman says, a simple statement of place. "The words evoke the image for you."

He's asked about the Denver Center's recent and very tech-heavy Macbeth. "What's interesting to me is that show sold a bunch of tickets. There was something about it that resonated," he says. "I tend to be a little allergic to the use of high tech," he adds, pausing to acknowledge that the Denver Center has some of the most impressive technical resources and capabilities of any theater in the country. "I want to be really disciplined. Just because we have the capacity to do these things doesn't help you to tell the story more clearly." 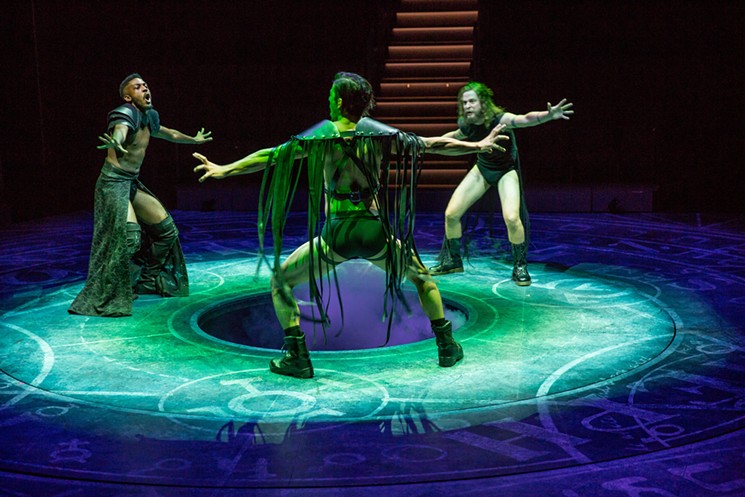 Thaddeus Fitzpatrick (left), Kim Fischer and Joe Goldammer in Macbeth.
AdamsVisCom
Coleman often speaks of doing "big plays." In the last several years, he says, "the economics of the American theater encouraged producers and writers to narrow their scope, use smaller casts, write smaller, do plays that take place in one room. I think that is unfortunate. Some of the most exciting plays want to be told expansively, with a lot of characters and locations and big costumes. One of the things this company excelled at, and should continue to excel at, is that it has the resources and facilities to pull that off. I don't mean just Shakespeare, but how do we mine the stories that come out of this region and say to writers, 'Think expansively. Think big. Let's see what comes out of that'?"

Coleman would like at some point to re-stage Bertold Brecht's The Caucasian Chalk Circle, the first play ever staged by the Denver Center company, when it starred a young, radiant and little-known Tyne Daly. "I'd love to come back to it; it's particularly resonant now," he says. In the spring of 2016, Thompson staged a brilliant production of Stephen Sondheim's Sweeney Todd: The Demon Barber of Fleet Street, utilizing the talents of Denver's gypsy-punk band DeVotchKa, and "I have this fantasy that we could get DeVotchKa to write a score for Chalk Circle, says Coleman. "It's the kind of play that's telling an epic story through music and heightened language across time but requires the audience imagination to finish the pieces of it."

Coleman is no elitist, though. "I grew up performing in musicals," he says. "I love making them and how audiences in America react to them."

He has clearly done his homework in sussing out the Denver scene. From the work presented here, he says, "I would have assumed that the audience was...not conservative, but centrist. But I see the response has been strong to stuff that's adventurous.

One of the company's most interesting ventures, Coleman feels, is the immersive pieces mounted over the past two years — Sweet and Lucky, staged in a RiNo warehouse set up like a magical antique shop, and this year's The Wild Party, for which audience members were invited to dress like flappers, dance and toss back gin, directed by Amanda Berg Wilson and thrown at Stanley Marketplace. "It's kind of brilliant that they're getting off campus, out into the community," Coleman says, "providing a different, more porous, tactile experience. The ticket numbers say that's resonating with the younger audiences we're trying to reach. The question now is how do those experiences become a pipeline to work on campus, convert people to dipping a toe in the water?"

Asked if he believes artists should become more overtly political in this age of Donald Trump, he responds, "Theater doesn't do politics very well." He goes on to describe a play he mounted in Portland about a family immigrating to Los Angeles and struggling to make their way there. "It is a fantastic piece of writing, a beautiful exercise in asking the audience to step into the shoes of people we've thought of as a statistic. I knew it was going to be topical when we programmed it. I didn't know it was going to be blazing hot. It has become quite resonant and is provoking conversation in ways I think are fruitful. I think what we do well is marinate on what's happening, and it comes out intuitively. When we intend the political, we don't do very good art."

During Donovan Marley's tenure, the Denver Center maintained a stable repertory company, but at that time such companies were disbanding all over the country. At first, Thompson had a core group of actors he tended to employ fairly regularly; this too has now dispersed. For Coleman, creating a permanent company is "not a priority. I'm interested in doing interesting and diverse work and finding the right artists to do that.

"That said," he adds, "about fifty percent of the actors at Portland Center Stage in any given season live in Portland. We've been very conscious of giving them opportunities."

A small spat erupted between Coleman and the Portland Mercury in 2012 when, angered by reviews, he decided no longer to provide tickets for the paper's critic. Asked about this, he says, "I've been reading the criticism in Denver over the last couple of months and so far have not encountered anybody with the basic lack of knowledge that that particular writer had. The actors who come and put themselves in front of the public every night have sacrificed their lives to do this work. None of them are going to get rich. Reviewers are entitled to have a wide variety of opinions, but if they feel the need to consistently diss and disrespect the actors ... "

This will be the third theater Coleman has the opportunity to lead, the first being Actor's Express, which he co-founded in 1988 in Atlanta. As for the Denver Center, "There is not another theater in the country with the same administrative and physical infrastructure inside one organization," he says. "I am honored to join these incredible storytellers.

"One thing I've learned is there's real value in trying to understand fully what is working and supporting that before you come in and start making pronouncements about what you want to do differently," he concludes. "And because this organization is the scale that it is, understanding what's possible is not going to happen for me in a week."