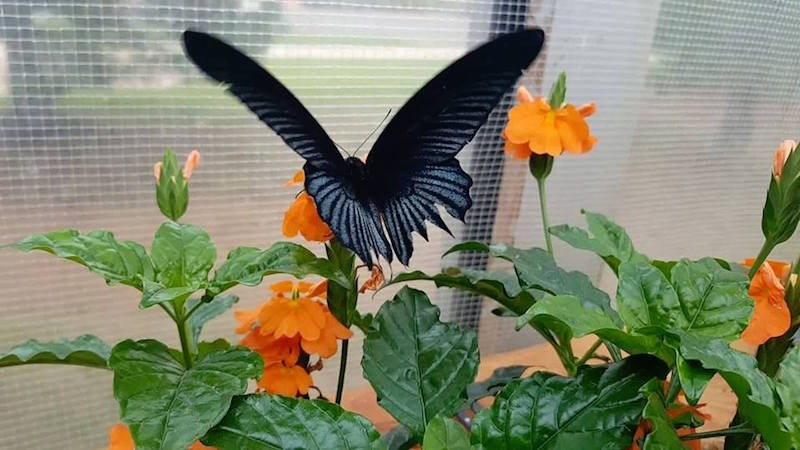 Butterfly Pavilion
Frolic with butterflies for a fraction of the regular admission price at Butterfly Pavilion's $5 Day on Saturday, November 18.
With near-daily reminders of how much it sucks to be broke and living on the Front Range, distraught wage slaves can take comfort knowing that Denver's creative community understands the struggle. That's why Westword can compile bi-weekly inventories of the city's best free and cheap events. This week, art and music lovers, cinephiles, comedy nerds, shoppers and families have a cornucopia of reasons to rejoice. Keep reading for ten of the best events in Denver and beyond this weekend, which all cost $10 or less to attend (including five with free admission).


CU Boulder Wind Symphony
Thursday, November 16, 7:30 p.m.
Macky Auditorium Concert Hall
Free admission
The subgenre of great art inspired by other great art is rich and varied. Composer Adam Schoenberg, inspired by the collection at Kansas City's Nelson-Atkins Museum, wrote the music for Picture Studies in 2011 as a contemporary response to a glorious musical conversation started by Modest Mussorgsky's Pictures at an Exhibition. Join conductors Donald J. McKinney and Brittan Braddock as they lead the University of Colorado's Wind Symphony through a stirring performance of Picture Studies. The evening's repertoire also includes an era-spanning variety of opening numbers, including Richard Strauss's "Serenade in E-flat" (composed when he was only seventeen), Joaquin Turina's "La Procesión del Rocío," and Gustav Holst's "First Suite in E-flat for Military Band, Op. 28, No. 1." The free concert at the Macky Auditorium Concert Hall on the Boulder campus is just one of many performances the university's music program happily provides for the classical-music-loving public. Visit the CU Presents events page to learn more.

Ryan Brackin
Comedy in the Alley: Adam Cayton-Holland
Thursday, November 16, 8 p.m.
The Alley
Free admission
Life is too short to watch bad comedy. Colorado abounds with free comedy shows, but without proper curation from savvy producers and capable hosts, most of these events are tantamount to open mics, where even a free ticket can feel like a rip-off. Comedy in the Alley is a free weekly showcase that brings the best local and traveling comics to a narrow bar off Littleton's Main Street. Co-hosted by Cody Spyker and Jacob Rupp of the Ice Cream Social podcast, Comedy in the Alley is a straightforward showcase format that allows fledgling comics to stretch their wings with longer sets and for seasoned pros to drop a little science. That fine tradition continues tonight with a crackerjack lineup featuring local cut-ups Alex Howard and Andres Becerril, along with Los Angeles' Sean Conroy (a writer for Key & Peele and Mr. Pickles) and headliner Adam Cayton-Holland. Visit the Facebook events page for more details.

Bug Theatre
The Emerging Filmmakers Project
Thursday, November 16, 8 p.m.
The Bug Theatre
$5
A local arts-scene institution that dates back to 2002, the Emerging Filmmakers Project has had untold influence on Denver's film scene. An essential networking and collaborative hub for every stripe of cinephile, the EFP celebrates community-building as much as it does films. Join host Patrick Sheridan for a diverse roster of short films including "A Hero in All of Us," directed by Travis Lupher, Matt Anderson's "Hard to Quit" and more, plus a special preview of the Bug's upcoming Denver Nickel + Dime Animation Extravaganza. Doors open at 7:30 and screenings begin at 8 p.m. Find more details on the EFP's Facebook page.

ConnectArte Mercado de Navidad
Friday, November 17, 5 p.m.
Museo de las Americas
Free admission
Whether local shoppers are ready or not, the Holiday season is nearly upon us. Thoughtful gift-givers have a chance to get ahead of the seasonal shopping craze while hunting for unique handmade treasures at ConnectArte's Mercado de Navidad at the Museo de las Americas. In addition to perusing shelves stocked with art, vintage goods and various collectibles, guests can also participate in crafts workshops where they can learn how to make gifts of their own. Vendors include Agua y Sangre, Natalia da Silva, Carol Mier, Lunapparel, La Catrina Grill, and many more. Find more details on the event's Facebook page.