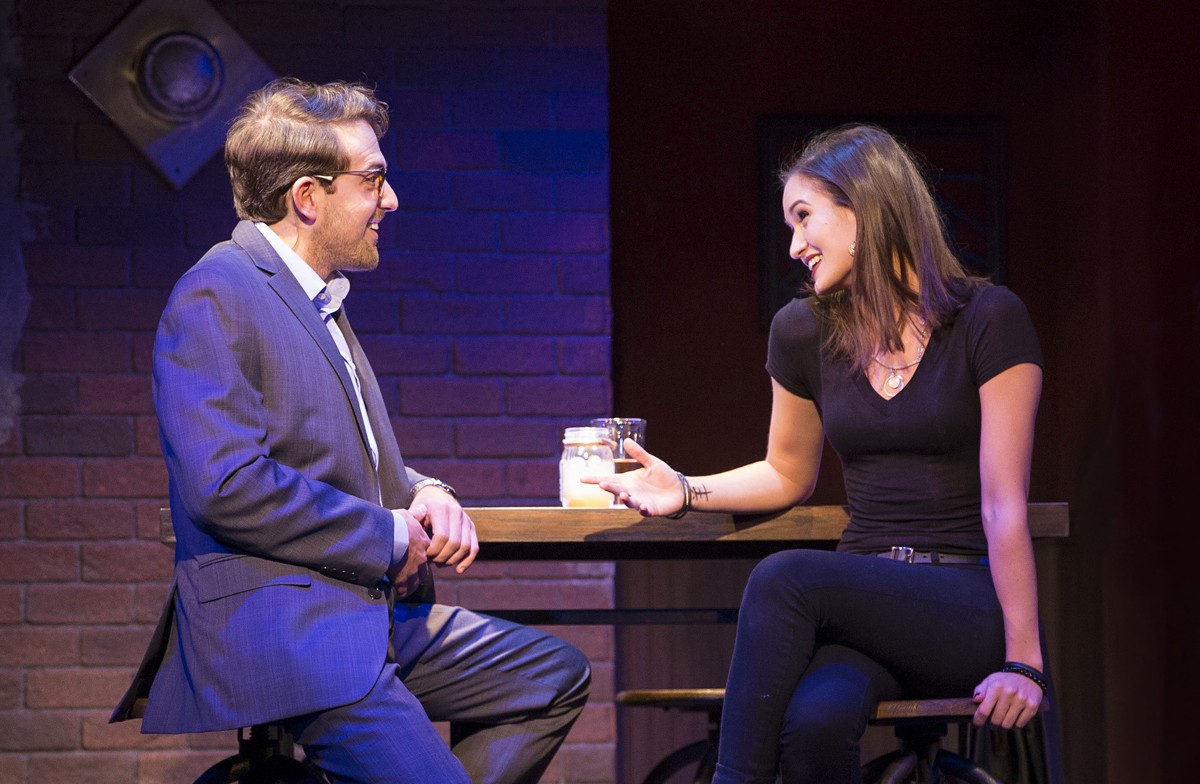 Emily Lozow
Seth Dhonau and Adriane Leigh Robinson in First Date: A Musical Comedy.
I’ve seen smarter shows than First Date: A Musical Comedy at the Garner Galleria Theatre, the cabaret-style venue at the Denver Performing Arts Complex where the entertainment is relaxing, the atmosphere’s informal and drinks are served during the show. I’ve seen funnier plays here, too, as well as wilder plays, riskier plays, even plays that break boundaries. Drag On, which celebrated the talents of a handful of Denver’s most fabulous drag queens, evoked the spirit of Comic Con. From the hilarious Act of God, we learned that the deity is “a jealous, petty, sexist, racist, mass-murdering narcissist.” Dixie Longate has more than once converted the space into an evening-long Tupperware party; after meeting her, you’ll never again look at a collapsible bowl or ribbed mug without snickering. But for a pleasant, well-acted and occasionally hilarious evening, First Date does the job well enough.

Casey (Adriane Leigh Robinson) and Aaron (Seth Dhonau) have been set up on that crucial first date at a restaurant, even though they seem mismatched: He’s a serious guy with a steady job in finance who hates blind dates; she’s what he eventually terms — though having uttered the term, he hastily retreats from it — a “blind date slut.” He wears a suit, and the waiter (Aaron Vega until December 3, when Jordan Leigh takes over the role) has already persuaded him to shed his tie. She’s in ripped leggings and has some vaguely defined job at a gallery. Like all human beings, both are dogged by their pasts and the people in them — friends, previous lovers, parents — and all of these characters (played by Lauren Shealy, Steven J. Burge and Vega) appear during the date to berate, confuse or egg on the couple. For Casey, it’s sister Lauren (Shealy) who’s most persistent. Lauren has children and a nice, stable marriage — a status both sisters see as ultimately desirable — and she wants the same for Casey. But Lauren’s not nearly as persistent as Allison (also Shealy), the bossy, manipulative woman Aaron almost married.

Casey has a gay best friend (Burge) who provides a handful of bail-out calls over the evening, though she soon decides she doesn’t want to be bailed out. She’s intrigued enough to entertain the possibility of a relationship, even though Aaron tends to irritate and distress her. She’s also distracted by the memory of a couple of bad boys she was attracted to — the kind of guys good girls always want to save.

The topics touched on in Austin Winsberg’s script aren’t very original: commitment phobia, the ticking biological clock, female self-consciousness about eating on a first date (will he think less of her if she tears into a burger?), wild girl versus repressed businessman. Does Aaron actually care anything about corporate finance? Is Casey really into anything arty, aside from her cunningly slit tights? If they felt more like real people, we’d care more about whether they connect or not. And when things get sentimental — Casey launches into “Safer,” one of those loud, quavering, I’m-so-sorry-for-my-lonely-self songs, or Aaron wins her sympathetic attention with a sad personal story — it’s hard to stay interested.

But then a funny scene will reel you back in. The couple discovers all kinds of inconvenient things about each other via Google, for instance; when Aaron learns that Casey isn’t Jewish, shrieks of rage and distress reminiscent of the ghostly grandmother Tzeitel in Fiddler on the Roof fly from the mouth of Shealy, who’s become, at that moment, Aaron’s outraged mother. And some of the songs, written by Alan Zachary and Michael Weiner, squarely hit their targets, such as “Allison’s Theme #2,” which reveals to Casey the real nature of Aaron’s previous relationship.

Above all, the evening works because of the amount of talent on stage. Robinson was a lovely Sally Bowles in Miners Alley’s recent Cabaret, and she’s bright, lively and lovely here, too. Dhonau is attractive in a properly nerdy way, and you can see why a wild girl could go for him. Also, he has a terrific voice. Vega does a suave nightclub act as the waiter, transforming himself into a humorously bossy Cupid in “I’d Order Love.” Shealy, another fine vocalist, dives wholeheartedly into her multiple roles, most effectively as Allison, by turns sweet or witchy, depending on how Aaron is remembering her. And audience favorite Burge has hugely infectious fun with his multiple characters.

In short, this production is a perfect date for anyone wanting to slip off their shoes under the table, sip a cocktail and recover from a taxing day at work.