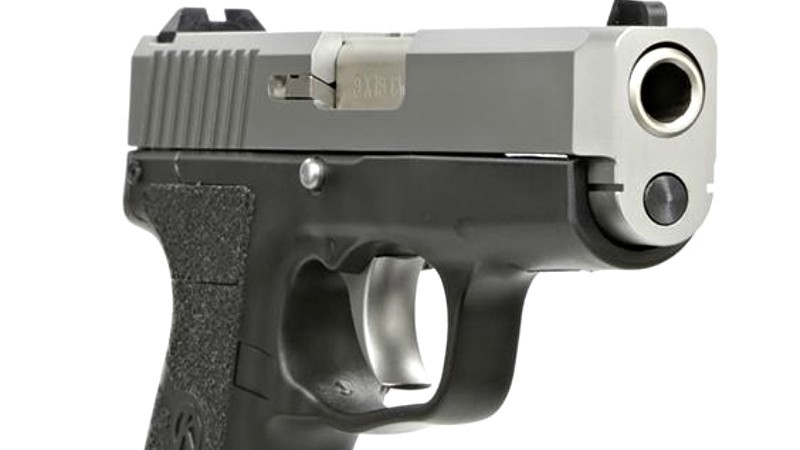 budsgunsshop.com
The Bud's Gun Shop page devoted to this Kahr 9mm semi-automatic handgun lets potential buyers view it from 360 degrees.
As we've reported, Colorado Representative Lori Saine was arrested at Denver International Airport on December 5 on suspicion of introducing a firearm into a transportation facility. Since the publication of our previous item, the Denver Police Department has released a probable-cause statement that reveals the make and style of Saine's weapon: a Kahr Arms 9mm semi-automatic handgun that's the subject of consistently positive online reviews and a YouTube video that's been viewed more than 67,000 times at this writing.

According to the PC statement, which is accessible below, Saine, a big supporter of allowing guns into schools, among other public places, was going through the north screening checkpoint at DIA at around 1:45 p.m. on the 5th when a TSA agent manning an x-ray machine spotted "what appeared to be a loaded firearm in a bag belonging to Saine...who knowingly brought the handgun" into the area.

By the way, the "knowingly" part of the report has been disputed by Saine's attorney, who maintains that she simply forgot that the weapon was in her luggage.

This sighting triggered a search of Saine's bag and the discovery of the aforementioned Kahr Arms 9mm. It had four rounds in the magazine but none in the chamber. Shortly thereafter, Saine was placed into custody and advised of her Miranda rights before being carted off to the hoosegow, where she lingered until last night, December 6 — and upon her release, following the posting of a personal recognizance bond, she was given the perp-walk treatment, complete with barked questions from journalists that she grimly declined to answer.

The moment is captured in this Fox31 video, shared on the station's Facebook page:


Thus far, Saine hasn't made any public statement about her arrest. However, a Denver Post piece revealing that she's only the second person to be arrested for taking a gun to the airport this year even though the Denver Police Department has responded to more than 100 reports of firearms within security checkpoints offers her the opportunity to claim she's being treated more harshly because of her notoriety.

As for her gun, here are its vital statistics, as listed on the Kahr Arms website:

The weapon is much liked by those who posted their opinions at Bud's Gun Shop, a major online firearms retailer that offers a bargain price for the model: $300, a major discount considering that it retails for $449. Of the 120 reviews posted on the site, 106 give the gun five stars.


Excellent 9mm for EDC. I like it as well as my Glock, but of course it is a bit less sturdy. Put 2,000 rounds through it, and no problems except for a certain reload which caused FTF. Easy breakdown and field strip.

I love this pistol. Although it has no external manual safety (which can be a good thing or a bad thing depending on the user) I find it ideal for concealed carry, especially with the standard 7 round magazine with flush base plate. I have average sized hands and the grip fits my hand perfectly. It has a great point of aim and the smoothest trigger I've felt for $300. As far as accessories, the new Hogue Handall Jr with beavertail fits well. Pearce also makes a pinky extension baseplate and Kahr has an 8 round mag with extended baseplate available, both of which come in handy at the range and as back up mags. I added a Streamlight TLR-6 flashlight/laser combo on mine and while I don't always use the laser at the range, every time I do turn it on it's right on point. Excellent pistol for the money spent, would highly recommend it.

This was my first conceal carry and the best by far other than being a 9mm and not many upgrades to choose from it makes up for in comfort on my front right, IWB or at my 5 o clock. I forget its there, but when you need here shes reliable. Never a misfeed, jam or problem thrown 3 to 4 general ammos through the time owned. After 2000 rounds and welly maintained after every time she went down range , extra magazines can be pricey buying them in 2 packs is recommended. I surely look forward to purchasing another, and more than likely thru Buds.

the cw9 is fantastic just like the rest of the kahr line up. this a very accurate pistol. i had 0 problems with this gun at the range. fits the hand nicely. kahrs triggers are some of the best out there. it has a nice smooth travel to a predictable break. i cant praise them enough for the trigger. im not a fan of a safety on guns meant for concealed carry. this trigger gives you confidence that you will not accidentally fire the gun. no safety needed carry it with one in the chamber and no thinking about it when you need it. its good to go. just wish it had a black slide like the p9. thanks buds!

Saine's arrest may have given her a political headache, but at least her choice of weaponry earned a Bud's Gun Shop rating of 4.8 points out of a possible 5.