How One Machine Can Change Colorado Hemp Farming

Ben Droz
Hemp has a stalking problem in Colorado.
Hemp, marijuana’s non-psychoactive counterpart, can be turned into a large variety of products. And in 2016, Colorado farmers produced half of the hemp grown in the United States. Even after more states started growing the crop in 2017, Colorado still planted over three times more of it than any other state in the country, with North Dakota and Kentucky following next, according to the Colorado Department of Agriculture.

But Colorado’s ability to process the plant is limited, because it doesn’t have a decorticator, a machine that separates hemp’s stringy outer layer, called the baste, from its woody core, known as the hurd. Traditional farming equipment and wood chippers get jammed up by the fibers, a kink that Cuno Hansen, head of clothing company All Seeing Colorado LLC, aims to fix by bringing in the state’s first decorticator.

During a two-year period of research and development, Hansen contacted Fort Lupton’s PureHemp Technology, a Colorado business that breaks hemp down into pulp and sugars. PureHemp put him in touch with an Australian firm called Textile and Composite Industries. Hansen investigated a variety of the company’s mobile decorticators and decided on the D8, a machine 22 years in the making.

After shipping costs, the D8 is around $300,000. It’s on the smaller side of decorticators, weighing in at about 5,000 pounds. It can process one to five tons of hemp per hour and can be assembled — or reassembled at a new location — in hours.

“That’s where our process lies — doing everything at the farmer’s property, and cutting out those shipping costs for processing labs,” Hansen explains. “And that’s how we go about it mobile without making a huge investment, to get the fiber [industry] going.” 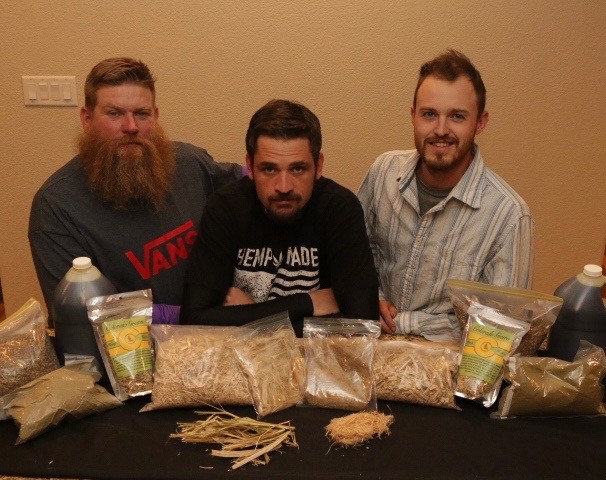 All Seeing Hemp founders (from left) David Shupe, Cuno Hansen and Raymond Swingle.
Cuno Hansen
Sweet Leaf Capital, which leases out extraction equipment to the cannabis industry, financed the purchase of the decorticator. In the year it’s been operating, Sweet Leaf has financed about fifteen projects, according to one of its principals, Ted Harris. This will be the company’s first foray into industrial hemp. “When we met Cuno, and he wanted to bring in the decorticator — and we wanted to get involved in the hemp space — we thought that would be a great fit for us,” Harris says.

This machine is the next step in processing the tons of hemp bales being stored on Colorado farms, just waiting to be put to use.

Agriculture stewards like Bill Billings, co-founder of hemp farm consulting agency Colorado Hemp Project, have tried to make some sense of the baled crop. In 2015, Billings used a combine to turn ten acres of hemp from farms in Rocky Ford into thirty tons of hurd. He says it sold for $600 a ton within a day. But it broke the combine, and farmers went back to storing their hemp stems. Some of them try pulverizing the stems with a hammer mill or just grind them up for rough animal bedding or hempcrete, but Billings says they are “not getting the most value for the product.”

Others are trying to make do with old-school separation methods. Army veteran Matt Kahl — more recently known for his work in getting post-traumatic stress disorder on the list of qualifying conditions for medical marijuana — breeds wild hemp for its high-yielding CBD flower, which he uses for medicine. He also experiments with processing the stalks to make high-quality art paper.

Kahl has processed stalks through retting, a process that he likens to the beginning stages of composting. Stalks are left in a field or container in which low levels of moisture breed bacteria, which then start breaking down the stalks and making it easier to separate the hurd from the baste. He’s also tried hanging them up and beating them, and he once boiled hemp stalks in water for three or four hours. The result, Kahl remembers, was “feathery-soft” fibers.

Bill Billings, co-founder of Colorado Hemp Project, stands next to a rolled bale of hemp stalks.
Bill Billings
If processing were more attainable and less expensive, Kahl says he’d jump on board. “I would absolutely love to get a pure hemp hurd product separated from my pure hemp-fiber product. If I could send it off to somebody, pay a small fee and then get it all returned to me separated, I would have a lot more use for the stalks, and I’d probably get a lot more economic benefit from them, too,” he says.

The construction industry has a use for the plant, too, but with tight profit margins. Left Hand Hemp, a sustainable building company in Boulder, uses hemp hurd as the base for a highly efficient form of concrete known as hempcrete. Hempcrete weighs less than traditional concrete and is more resistant to fire, humidity, mold, pests and weather, according to Left Hand owner Kelly Thornton.

Thornton gets his hurd from Old Dominion Hemp in Virginia, which receives its raw material from Europe and New Zealand. Thornton says hurd can cost him as much as 50 cents a pound; based on the Canadian market, he estimates he could buy it for under 20 cents if it came from Colorado. “If we could process it, produce it and grow it in this state, it would be amazing for [the] economy,” Thornton says.

Since Thornton started building with hemp eighteen months ago, he’s completed two major projects and a handful of smaller ones, including Denver’s first permitted hemp building in October. Tentatively on the books for next year is a client who wants to build a nearly 2,000-square-foot hempcrete dwelling in southern Colorado.

As of now, however, Hansen can't expand operations to the whole state. He’s currently working with a group of farmers in Yuma County to source his hemp. Longtime farmer Randy Taylor says he’s been working on farms since he was five and has been operating his own for the past forty. Now 63, he harvests about 7,000 acres of wheat, corn, soybeans, birdseed and hemp, and has noticed that several of his neighbors have tried to grow hemp over the past couple of years.

They, too, are storing their stalks, Taylor notes. And with prices of commodities like corn and soy plummeting in recent years, he sees rural areas like his struggling. “I think hemp could be a shot in the arm,” he says.

Hansen says Taylor is heading up the partnership of Yuma County farmers who will provide the decorticator with a steady stream of hemp, but a modest Taylor insists that he’s just advising Hansen on how to keep such a partnership together, because he’s seen similar organizations, like co-ops, fail. He understands the delicate balance of managing farmers and big business.

“I know how farmers think and I know how big business works, and what I know is that neither of them can have complete control — but both of them want complete control,” Taylor explains. “It’s a two-way street no matter what we’re producing in America…. If big business and the farmer can’t get together on this, it won’t work.”

Up until now, Yuma County farmers would have been considered adventurous if they’d planted sixty or eighty acres of hemp, because there was no telling if they could sell it. Taylor says people want their industrial hemp stalks and want farmers to grow them, but intermediates aren’t willing to pay for the stalks up front when they don’t know if they can sell them up the supply chain. Without any processing equipment or contractual promises of payment, farmers are more than leery of growing a lot of hemp.

Adding to the uncertainty is the fact that hemp acreage isn’t insured by the federal government. In Yuma County, many crops are on a three-year rotation: For example, if hemp is grown one year, soy is grown the next, followed by corn, then back to hemp. Each time hemp is raised, farmers have to remove the acreage on which it’s grown from their federal insurance, then re-enroll it after the land has been harvested.

The D8 decorticator separates hemp’s baste from its hurd.
www.textilecompostie.com.au
Because of All Seeing Colorado and its decorticator, however, Yuma County hemp will have more certainty next year. It will be raised in a central location with 290 acres, 160 of which are dry-land and 130 are irrigated. With a partnership, and with Taylor at the helm of it, All Seeing Colorado can better maintain consistency, control and education in its hemp-farming practices. All of this makes Taylor hopeful for more in the coming years: “[Hemp] will become the most dominant weed out there,” he predicts.

Harris is also confident that hemp is going to be “the crop that will probably save the farm,” but he’s still cautiously optimistic about the endeavor. A lot has to happen before it can be deemed a complete success, and he’s literally putting his money with Hansen and hemp. Once they get the decorticator, they’ll spend time getting to know the machine at PureHemp Technology’s headquarters in Fort Lupton.

Unlike more traditional, high-fiber hemp genetics from Europe, which result in plants that are tall and slender, much of Colorado’s hemp is grown short and bushy. Harris and Taylor will run a variety of different stems through the decorticator to see what is viable. Hansen is hopeful that they’ll be fully operational by the end of January.

Then there’s getting the raw material to manufacturers who can turn it into products and get it to market. Hansen wants to break into three specific sectors: biodegradable plastics, semi-composites for the automobile industry, and textiles. “That’s what our passion is: to bring these renewable plastics to the market,” he explains.

And his ambitions don’t stop at Colorado: He’s positioning himself to be the guy who brings decorticators stateside in an effort to get the country’s hemp-fiber industry on track. He’s talking with representatives from North Carolina and Kentucky about sharing his team’s processing techniques.

Hansen believes they’re creating something big that is about to snowball in 2018. “We intend to create a viable cash crop for Colorado farmers,” he says. “Boosting rural economies, creating new jobs and developing world-changing hemp innovations is the direction of our company vision. Colorado has created a monster opportunity, reopening a door that has been shut for over seventy years.”