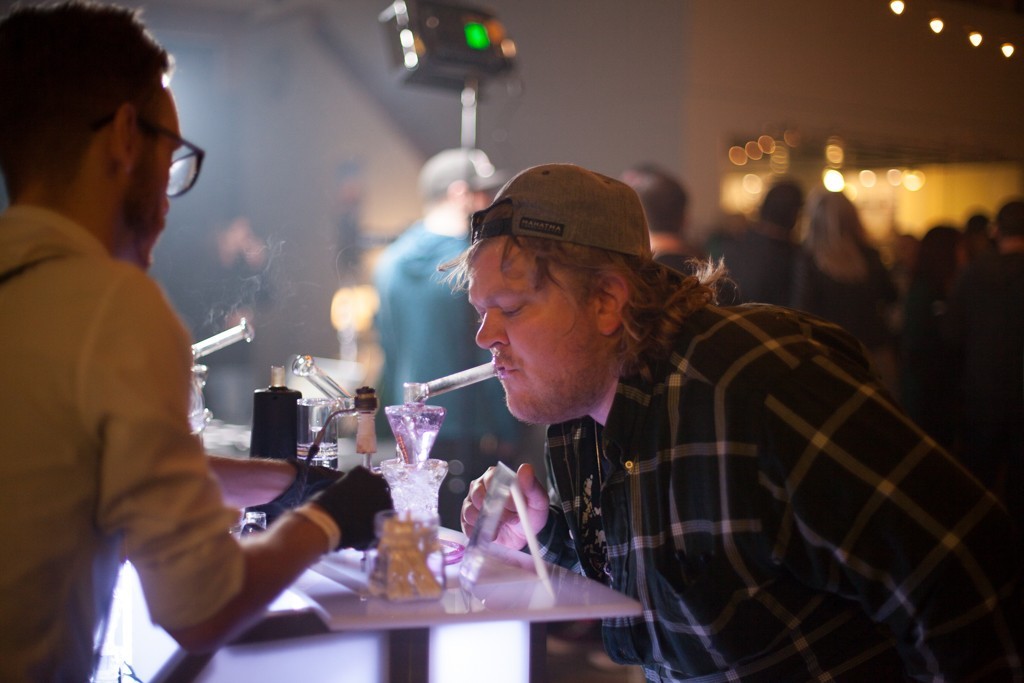 Jacqueline Collins
A man takes a dab inside a private party held by the Grow Off.
The City of Denver has received its first official application for a cannabis consumption area inside a business. The Coffee Joint, a planned coffee shop and pot lounge at 1130 Yuma Court, just off Interstate 25 and West Eleventh Avenue, submitted its application on Friday, December 8, according to Daniel Rowland, director of public affairs for the Denver Department of Excise and Licenses.

Excise and Licenses, the city department responsible for overseeing social consumption permits, opened the application process in August but received nothing for nearly four months as local businesses investigated whether they qualified under the extensive list of location requirements. The Coffee Joint seems to have that locked: It will neighbor 1136 Yuma dispensary, and cannabis dispensaries must abide by location restrictions similar to the thousand-foot buffer between a consumption area and any school, child-care establishment, drug or treatment facility, city park, pool or recreation center.

According to Coffee Joint co-owner Rita Tsalyuk, both her business partner, Kirill Merkulov, and her husband are co-owners of 1136 Yuma. "We already ran into every possible obstacle on the dispensary side," she explains. "Once the dispensary was cleared, we knew we were 1,000 feet away from everything we needed to be."

Tsalyuk and Merkulov had been brainstorming the idea of opening a consumption-friendly business for around two years, she says, and had been following the progress of Initiative 300, which voters approved in November 2016, paving the way for Denver businesses to apply for private cannabis consumption areas. Once the rules were approved, the duo leased the property adjacent to 1136 Yuma and began preparing it to meet the Excise and Licenses application requirements.

Per city requirements, any social consumption application must have written support from a neighborhood or business organization that presides over the address's jurisdiction. According to Rowland, the Coffee Joint has written support from the La Alma-Lincoln Park Neighborhood Association. The next part in the process will be an application review by the city, which Rowland says will take a few days. If approved, the application would "typically" go to a public hearing within two to three months, he adds.

Tsalyuk says the status of the Coffee Joint's consumption application won't affect the shop opening as a cafe within the next month. If and when the application is approved, though, she plans on charging a $5 entrance fee to the cafe, which will include a free cup of coffee or tea; the Coffee Joint will also have custom drinks made to order and pre-packaged food for sale. There will be a lounge for vaporizing and eating cannabis, but it's illegal to allow smoking inside because of the Colorado Clean Indoor Act. There will be no area outdoors for smoking, according to Tsalyuk, but there will be a private conference room for pot-infused parties, events and meetings.

"We'll also be specializing in education. We want to have scientists, psychologists and psychiatrists come in for lessons on [cannabis]," she says. "We also want to host painting, art and other classes."