The Toro Pot: A Diner Dish Unique to Denver

Mark Antonation
The Toro Pot at Swift's uses the original Pete's Coney Island chili recipe.
Denver history is worn into the formica tabletops and vinyl booths of timeless diners scattered across the city. The scent of coffee, fried potatoes and burger grease wafts through the murmuring dining rooms, carrying with it memories of meals past. Places like the Breakfast King, Lookin’ Good and Swift’s Breakfast House smell much the same now as they did thirty or forty years ago. The menus, too, hold hints of the past.

While pancakes, chicken-fried steak and meatloaf can be found at nearly every roadhouse and all-night greasy spoon from Bangor, Maine, to Eureka, California, regional specialties will instantly tell you what town you’re in. Our city has just such a dish, but it’s not the lamentable Denver omelet, the far more legitimate Mexican hamburger or even the ubiquitous bowl of green chile, which would only serve to narrow the location to somewhere in the Southwest. Instead, Denver’s unique contribution to the diner lexicon is the Toro Pot: a construction born of ingredients on hand, a touch of ingenuity and a short-order cook’s predilection for kitchen slang. Only a handful of breakfast joints and 24-hour eateries in the metro area offer the imposing construction of beef, potatoes, cheese and smothering sauce, and you’re unlikely to find it beyond Colorado’s borders.

The Toro Pot is totally Denver. 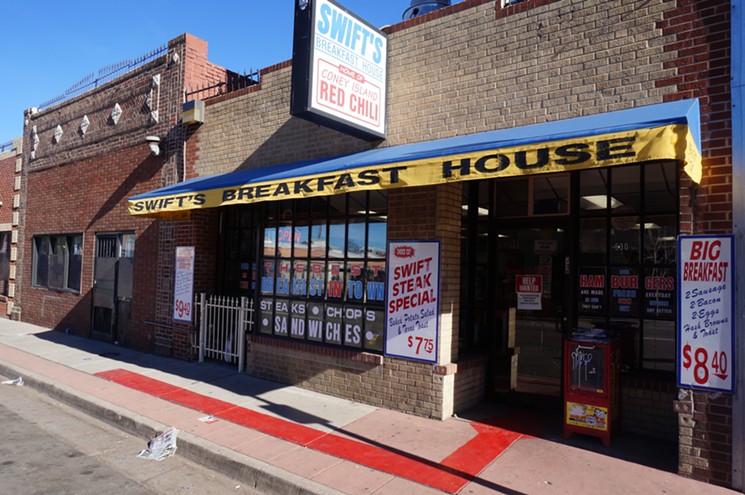 Swift's Breakfast House serves a bite of Denver diner history.
Mark Antonation
At Swift’s Breakfast House (930 Santa Fe Drive), the cook taps out a message in Morse code on the hot griddle with his spatula. The staccato chime announces another round of hash browns as he chops with the edge and flips with the flat tip — ding-da-da-ding-ding, order up! If you’ve ordered a Toro Pot, those crisp-crusted hash browns will find themselves wrapped up in a tortilla along with a sand-bag-sized helping of seasoned ground beef before being drowned in a ladle or two of chili. And that’s chili with an “i,” the red stuff, chili con carne.

Swift’s chili — deep brownish-red with a fine grain and not a bean to be found — is a clue to the Toro Pot’s probable origins; the menu proudly specifies that the recipe comes from Pete’s Coney Island. To trace that reference back in time, you need to know that there have been several prominent Pete’s in Denver’s restaurant history (and at least one other Coney Island, but this one’s not the hot dog-shaped wiener stand that has been carted from Denver to Conifer to its current home in Bailey). Pete Contos oversees a colony of restaurants and bars — most of them on Colfax Avenue — that includes Pete’s Kitchen and Pete’s Satire Lounge. And there was Pete’s Cafe & Steakhouse, which ran for more than forty years (also on East Colfax Avenue) before owner Pete Gatseos retired and closed the place almost two years ago. 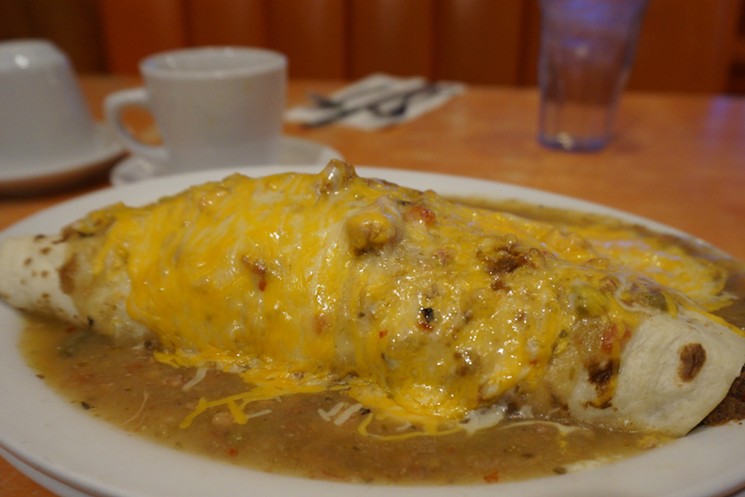 Breakfast King has been serving the Toro Pot since 1975, although the preferred chili has changed colors.
Mark Antonation
And then there was the original Pete’s Coney Island, which held its ground at the corner of 14th and Stout streets until nearby Currigan Hall was slated to be redeveloped into the much larger Colorado Convention Center in 1990. That’s when Pete’s, along with other buildings on the block, met with the wrecking ball.
Did Pete’s Coney Island red chili top the first Toro Pot, which then migrated to Swift’s and on to several other diners? George Strompoulos, owner of Peppers Restaurant (3500 Morrison Road), thinks so. Peppers sells a version of the Toro Pot that it tops with your choice of chili — either red or green. The owner attributes the invention of the dish to Pete’s Coney Island, citing a conversation with the Pete in question. “The owner was Pete Fotinos, and Pete told me one time, ‘I invented the dish,’” explains Strompoulos, who has owned Peppers (which originally opened across the street as the Breakfast Prince) for 36 years.

Terry Moore, co-owner of Breakfast King (300 West Mississippi Avenue), may not completely agree with that story, but he’s not going to argue the point. “I wish I had something more poetic to tell you, but there’s not much to it,” Moore says. “The Breakfast King has been open for 42 years, and the Toro Pot has been on the menu for 42 years.”

While other Denver spots serve the dish, he thinks Breakfast King has been doing it the longest — and that’s likely true, at least when you consider restaurants that are still open. Back in 1975, the Toro Pot at Moore’s diner came with chili con carne, but these days the green chile is far more popular, and now the default option (although some old-timers still go with the red). As for the riddle of why the dish is called the Toro Pot, he says that “pot” is kitchen shorthand for potato and “toro” lets guests know to expect something spicy — at least during the relatively low-heat era when it was conceived. 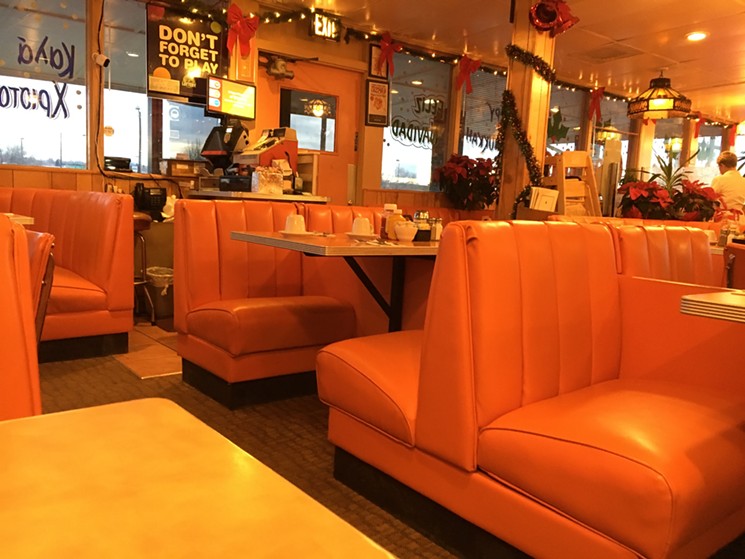 It always feels like sunrise (or sunset) at the Breakfast King.
Mark Antonation
The orange decor at the Breakfast King adds a distinct glow to the interior; the soft clinking of thick coffee mugs creates a musical tink-tink-tink coming from the dish pit and the coffee station. Truckers in worn mesh caps and camouflage jackets read the paper as they wait for food, and waitresses glide between tables in crisp uniforms. And then another Toro Pot emerges from the kitchen, turning heads with its sheer immensity. The dish is half-again as big as its counterpart at Swift’s, but it’s also not as cheap. The Toro Pot at Swift’s, complete with a fried-egg topper (an add-on you won’t want to skip), can be had for under $10, while an unadorned Toro Pot and a bottomless cup of joe tops $14 here.

Nick Melisaratos is the general manager and a second-generation family member at Lookin’ Good Restaurant (66 Sheridan Boulevard). He says his parents opened the place in 1978, and that the Toro Pot was on the opening menu. “People used to call green chile ‘toro,’” he notes, so Lookin’ Good’s version has always been made with green, not red.

Over at Mike’s Cafe (4110 South Federal Boulevard in Englewood), you can get a breakfast or lunch version of the Toro Pot; in the morning, scrambled eggs are also folded into the flour tortilla.

A few other places around town also offer a Toro Pot, mostly unchanged from the original configuration: all three locations of Sam’s No. 3, the Breakfast Queen in downtown Englewood, George’s Cafe in Arvada, the Breakfast Inn on East Evans Avenue. But most of these eateries have been around for years, if not decades; hip, modern kitchens seem to have little knowledge of, and much less use for, something as old-fashioned and lacking in pizzazz as meat and potatoes wrapped in a tortilla and drowned in sauce.

Give us instead our trendy chicken and waffles, our eggs Benedict done a hundred different ways, our Southeast Asian-inspired breakfasts and hyper-regional shrimp and single-estate grits from the New South. But for Pete’s sake, Denverites, please don’t forget the humble and oddly named Toro Pot, or the short-order cooks in cocked paper hats and grease-stained aprons who care little for talk of culinary history — choosing instead to put it right on your plate.