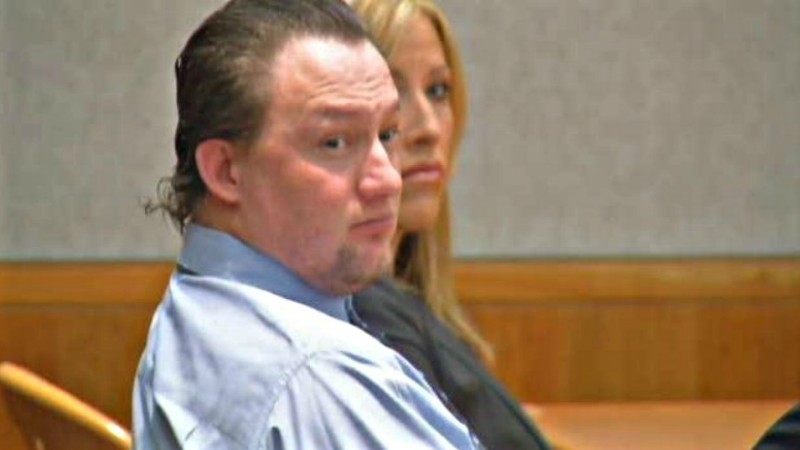 Denver7
Bruco Eastwood at a previous court appearance.
As we've reported, a December 15 hearing that could have given additional freedoms to Bruco Eastwood, who's lived at the Colorado Mental Health Institute in Pueblo since being found not guilty by reason of insanity for the 2010 shooting at Deer Creek Middle School, was canceled at the last minute. Among those relieved by this turn of events was Eastwood's prosecutor, Steve Jensen, who channeled his frustration over a judge's refusal to allow his psychiatric expert to interview the gunman into legislation requiring that court-ordered mental health examinations be recorded on audio and video. Believe it or not, doing so wasn't mandated until the bill became law nearly seven years after the shooting. Here's the story of Jensen's quest and Eastwood's role in it.

Eastwood had a history of mental problems well before his February 23, 2010 visit to Deer Creek. After an arrest in 2002, we pointed out in previous posts, he was placed on a mental-health hold because he thought voices were coming from a Nielsen ratings box attached to his television — and he continued to hear such voices in the years that followed. He was also reportedly afraid that imaginary creatures were stealing food from his stomach.

Against this backdrop, Eastwood left the Hudson home he shared with his dad around midday on the 23rd, armed with a loaded hunting rifle he took from his father's closet. After stops at Dick's Sporting Goods to buy more ammo and lunch at a McDonald's, he arrived at Deer Creek and parked in a lot across the street from the school. A custodian saw him there and encouraged him to check in at the office, which he did, obtaining a visitor's badge.

When the school bell rang at 3:05 p.m., kids began exiting the school. Eastwood soon approached a group of girls and asked if they went to school there. After one answered in the affirmative, he revealed his rifle and fired a shot, striking a student named Reagan Weber in the arm.

Helicopters captured footage of Deer Creek Middle School students fleeing the shooting scene.
YouTube
As the girls ran, Eastwood reloaded and squeezed off another shot, this time hitting student Matt Thieu, who suffered a punctured lung and broken ribs. But before any more children were injured, Dr. David Benke, a Deer Creek math teacher, tackled Eastwood and held him down until authorities arrived.

While in custody, Eastwood exhibited plenty of bizarre behavior — such as picking at his skin in an attempt to remove the "transforming forces" from his body. But he also told officers that he'd attended Deer Creek for a time back in 1991, after his parents were divorced, and felt ostracized and bullied by "rich kids."

Determining Eastwood's mental condition from a legal standpoint got complicated after that, as Jensen acknowledges.

"There were a few things that happened legally and procedurally that I very much disagreed with," Jensen notes. "Eastwood was evaluated first by someone hired by the defense, and once they got a report, they entered the plea of not guilty by reason of insanity and supplied the evaluating doctor appointed by the state hospital with the report. Then an evaluation was done, including interviews of Eastwood, none of which were recorded in any way. They gave us the report, and I said, 'Wow, I disagree with parts of this. There were a bunch of questions that weren't asked that I'd want to have asked. I want to have our own evaluation done.'"

At that point, Jensen asked that Steve Pitt, a forensic psychiatrist whose services were secured by prosecutors, be allowed to sit down with Eastwood — but the judge turned down the request.

This ruling didn't prevent Pitt from putting together a massive and fascinating psychiatric report about Eastwood; it's accessible below. But because he didn't get the opportunity to interview the shooter personally, or even view or listen to recordings of his conversations with state hospital personnel, Pitt was unable to offer definitive conclusions.

In the end, the jury settled on what First Judicial District DA Pete Weir characterizes as "a strange verdict." Eastwood was found to have understood the difference between right and wrong at the time he procured the gun he used and was therefore legally culpable. However, jurors determined that Eastwood was not guilty by reason of insanity when he actually fired the weapon at Weber and Thieu.

Jensen describes the roots of this mixed decision like so: "If you read Colorado's insanity statute, the definition of serious mental condition or disease has a provision that says the conditions do not include conditions that are motivated by hatred, revenge or moral obliquity — because in those cases, a person's accountable to the law. And even though Eastwood was obviously mentally ill, he said the reason he had done what he did was because he hated the school and hated the kids who went there. So he had some pretty traditional motivations of revenge for going out there, and I argued that he was accountable because that fit into these other categories — and we don't put language like that into statutes for no reason. But when the jury asked a question about that, the answer the judge gave took that out of consideration for them."

A photo of Bruco Eastwood in his youth.
File photo
In the wake of the decision, Jensen wanted to ensure that future mental examinations like the ones conducted with Eastwood were recorded — and the process of making it happen was lengthy. Senate Bill 16-019, the fruit of his labors, was finally passed and signed into law last year. It went into effect this past January 1.

Eastwood, for his part, was determined to have served the criminal sentence for possessing the gun in the lead-up to the trial — and now, seven years later, the Colorado Mental Health Institute asked a Jefferson County judge if he could leave the facility without supervision, at least for limited periods of time, before withdrawing the request in the face of outcry from Weir and Thieu's family, as well as coverage by Westword and other sources. The relatively brief passage of time before such a request isn't unusual, Jensen points out: "The system is set up so you can have people who were mentally ill and very dangerous get pushed out of the state hospital in just six or seven years," with overcrowding among the factors.

This situation has led Jensen to consider writing another piece of legislation — one that would establish minimum stays in the state hospital for those found not guilty by reason of insanity for certain crimes. In his view, requiring that a mentally ill killer be confined for at least fifteen or twenty years might prevent worst-case scenarios like the one involving David Lynn Cooper, who murdered his ten-year-old daughter and began cooking her intestines mere months after his 1996 release from the hospital, where personnel had determined that he was no longer a danger to himself or others.

"We have a responsibility to try and keep the public safe," he stresses, "and so striking a reasonable balance to try to accomplish that, I think, is critically important. And when I view this case, that's what I'm looking at. I prosecuted cases related to the Columbine massacre — the guys who supplied the guns to the killers — and to have another school shooting a mile away at a middle school that feeds into Columbine is pretty disturbing. I think most citizens, as well as parents, put a high value on keeping our schools safe, and I think we should come down on the side of public safety."