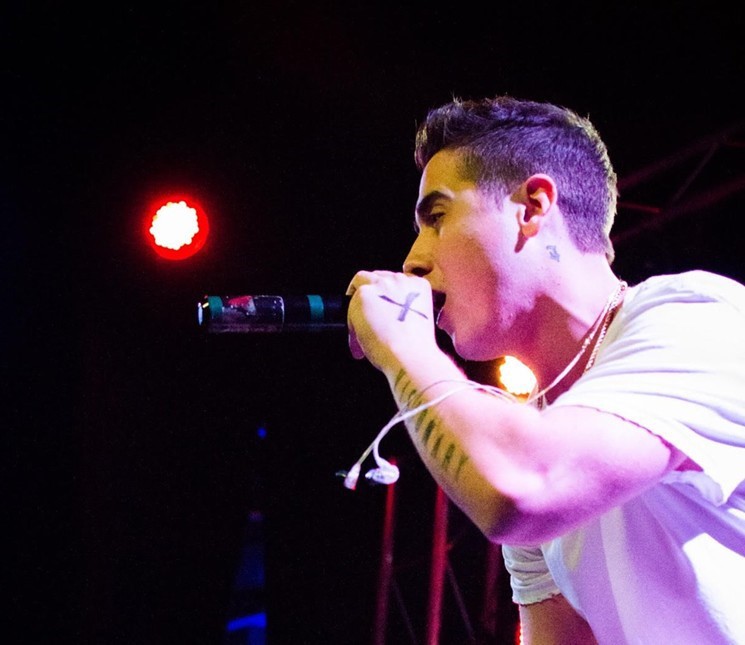 Ciara Boyd
Chase is climbing Denver’s hip-hop ladder.
Denver hip-hop artist Chase doesn’t rap about drugs or violence; he aims to convey positive messages in his music and be a good influence on his followers.

Chase started writing poetry when he was eleven years old. As a senior in high school, he realized hip-hop could offer him a viable career path.

“For sure, my biggest influence would have to be Tupac,” Chase says. “I’ve always looked up to him since I was a kid — just in my life, the poetry leading to the music aspect. To me, I can relate to a lot of the stuff. Lil Wayne, as well: He was one of the people I’d listen to when I was younger and I’d try to imitate.”

Fast-forward to now, and at twenty, Chase has blossomed into a one-to-watch local rapper with a sound he describes as “new age, with old-school, real hip-hop — lyrical conscious rap.” He says there’s a perfect storm on a national level, as gangsta rap and bling-driven hip-hop have given way to the intellectual, socially aware lyrics delivered by the likes of Chance the Rapper and Jidenna, among many others. Chase wants a seat at that table.

“I do think it’s a healthy time for hip-hop,” says Chase. “It’s a time for real hip-hop. I think there’s a lot of music going around that has bad messages, negative energy around the music: dealing drugs and violence. What I try to do is give a positive message through my music. I try to be inspirational while having fun with it. I just know, because the new generation is always going to create the new styles. So if we’re giving them only bad music and negative energy, negative vibes, it’s really not good. So I do believe that it’s a good time for conscious, lyrical, real rap.”

Chase believes his positivity has yet to be embraced by the Denver rap scene — the key word being “yet.” He acknowledges that while there are many great artists in this region, there is still work to do before a local rapper blows up nationally.

“I feel like there are a lot of imitation artists rather than people really creating something new and stories true to themselves,” he says. “I feel like a lot of people are imitating those who are already in rap. In the scene, having no one from Denver get big on a national level is hard. But it’s such a big city, and such a growing city, that we really need that staple of hip-hop music, because it’s so important to the culture.”

Still, Chase acknowledges, there’s a lot going on in Denver hip-hop, and there are many people making excellent music — even if it remains mostly underground. And a big plus for the scene, he says, is that the city boasts quality rooms for artists to perform in.

“I really like the sound at Summit Music Hall,” says Chase. “I did an opening show there one time. If you’re a smaller artist like me doing my first headlining tour, the Roxy or Cervantes’ are always good.”

Chase takes pride in his live set, in part because he keeps it raw.

“You’re going to see live drums, a lot of crowd interaction,” he says. “It’s going to go through a lot of story lines. It’s going to be more of a theatrical thing than just me up there doing the songs back to back. It’s going to be really live. I’m not singing with the track playing; I’m doing it all live.”

His lyrics will cover the everyday events of his life. His seventeen album was released last July, and the bulk of his December 21 set at the Roxy will be pulled from that; there will also be tunes from The Chase LP, which is set for release in March.

Looking forward, 2018 should be a key year for the rapper. His stock is on the rise, and his reach extends to Canada and even Iceland. How far he can go with his new album remains to be seen, but he’s determined to keep growing and evolving as a musician and songwriter.

“I think I’ve gone from imitation to inspiration in my music,” he says. “A lot of it was looking up to these guys who I was listening to, or trying to be them or copy them. It turned into realizing that the best music was in my own stories and telling my real life experiences. Really developing a story behind the music — that creates a huge fan base. People can really relate to that.”