The Ten Biggest Arts and Culture Stories of 2017 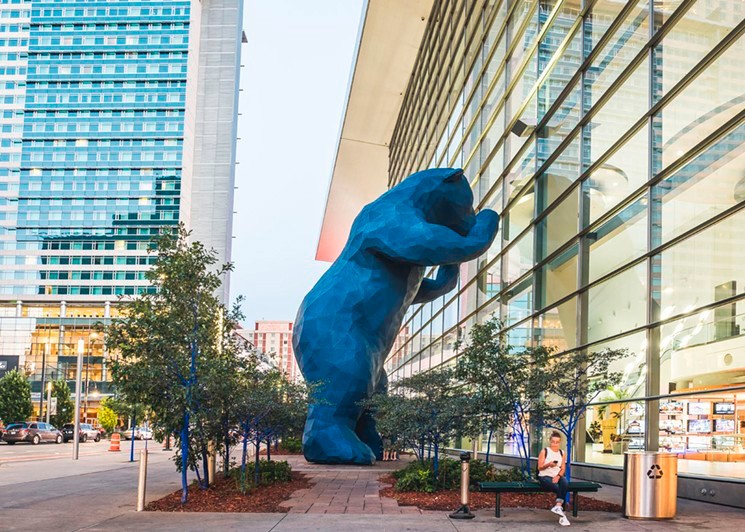 Marvin Anani
Lawrence Argent, the artist who created "I See What You Mean," died in October of 2017.
It's been a roller-coaster year for the arts community. More people are visiting major arts museums than ever, all while workaday artists and smaller galleries are being priced out of their homes. Labor politics have come front-and-center in the cultural discourse, and creatives have taken to politicking for their survival. In addition, both of Denver's largest art museums embarked on major renovations, the Denver Center for the Performing Arts and the Boulder Museum of Contemporary Art endured major staff shakeups, and one of the city's most renowned artists died unexpectedly.

Arts lovers are mourning the people and places that have been lost while anticipating what's to come. Here are the ten biggest arts and culture stories of 2017.

1. DIY venues struggle after the Ghost Ship fire.
After Oakland's Ghost Ship fire, the end of 2016 was a disaster for DIY artists. Cities around the country shuttered underground spaces over safety-code compliance issues, often leaving their resident artists out in the cold. In Denver, Rhinoceropolis and Glob were the most prominent casualties. But the story doesn't end there. Convinced the City of Denver didn't do enough to support them, local artists organized under the banner Amplify Arts Denver in January. In response, the city launched the safe occupancy program, which officials tout as the first of its kind nationwide. The program gives owners and operators of unpermitted buildings a chance to work on safety compliance without necessarily facing eviction — a plan that Amplified has described as "deeply flawed." By December, the city had set up a $300,000 fund to help program participants bring their spaces up to code.

Chris Coleman is the new artistic director at the DCPA.
Jenna Saint Martin
2. DCPA shakes it up.
The Denver Center for the Performing Arts Theatre Company saw big changes this year. Former artistic director Kent Thompson resigned on January 5 amid a squabble on the institution's board that led to the resignation of trustee Jim Steinberg and, ultimately, the hiring of a new artistic director, Chris Coleman, in November. Coleman, who comes from Portland Center Stage, embraces large-scale productions, nurturing the grand visions of up-and-coming playwrights. He prides himself on being a staunch champion of his actors and crew, going so far as to block a Portland Mercury theater critic from reviewing performances because the journalist would "consistently dis and disrespect the actors," he told Westword.

3. Denver loses galleries to the 'burbs.
The arts world isn't immune to Denver's rising rents. Several galleries and cultural spaces ditched the Mile High for cheaper areas, including Lakewood, in 2017. The suburb to the west is now being celebrated regionally for its creative boom, thanks in part to new tenants including Pirate, Edge, Next, Sally Centrigrade and Reed Art and Imagining.

4. Meow Wolf contemplates moving to Denver.
The George RR Martin-funded Santa Fe arts juggernaut spent the better part of 2017 in discussions with Denver creatives about whether to open a second outpost here, and it's made moves all year that indicate it's seriously considering the Mile High City. Meow Wolf donated $20,000 to Rhinoceropolis and Glob in January to rebuild, collaborated with the experimental marching band Itchy-O in March, and donated $34,000 to underground arts groups, working with the city to distribute $20,000 to creatives in May. Expect an official announcement in early 2018.

5. DIA deaccessions Michael Singer's "Interior Garden."
In April, Denver International Airport brass asked the Commission on Cultural Affairs to deaccession three public artworks that had been purchased using taxes levied on construction projects — a request not without controversy. Michael Singer, the man behind "Interior Garden," a living garden that Westword described as "the enormous, haunting ruin in the center of the C Concourse," asked the commission to allow the piece to stay. Ultimately, Denver Arts & Venues head Kent Rice sided with DIA, so the piece will be deaccessioned — but with certain stipulations, including that the airport must commission a new public artwork by Singer.