Review: Solid and Ephemeral Ideas Now on View at Pirate Courtesy of Dominic Muttel
Installation view of Dominic Muttel's "Flimsy Currency."
Pirate, the venerable artist cooperative — what’s come to be called a DIY venture — was one of a number of art venues that were driven out of their Denver homes by the spiraling rents that come with gentrification. The longtime flagship of the cluster of alternative spaces at 37th Avenue and Navajo Street had been there for decades, but it’s now in the middle of nowhere in a crumbling part of Lakewood.

Except for the somewhat obscure location, though, Pirate has landed on its feet. In fact, the new space is better in many ways, and the shows that have been presented since the move last year have set a very high standard.
The only thing that isn’t working at the new Pirate is viewership; traffic is down dramatically. That's likely because some people view the new spot as remote — but it's actually quite close, as quick to get to from central Denver as RiNo (particularly if you're stuck on Brighton Boulevard).

The new layout takes you to the Associates’ Space first, rather than last, so the current offerings begin with Dominic Muttel: Flimsy Currency. It's very slick, and I don’t mean that in a negative way. Muttel has used various ready-mades that he’s chastely installed in a blindingly white space; the whiteness is reinforced by white frames on many of the pieces, as well as white stands on which the three-dimensional pieces are displayed.

“Strapped In” by Dominic Muttel, ready-made materials.
Courtesy of Dominic Muttel
There are touches of color here and there, like the rainbow-hued “confetti” scattered on the top of a plinth in "Clippins/Confetti." The little arching shapes in an array of fruity shades are actually Muttel’s fingernail clippings, which have been dyed from a soak in different flavors of Kool-Aid. The artist says that this piece is about the passage of time, but what I thought was most compelling was the contrast between the party mood conveyed by how the confetti bits look...and the slight stomach turn produced when you learn what they are.

Other pieces are less visceral but just as personal, given the inevitable psychological interpretations. In “In Case of Emergency Break Glass to Feel Fuzzy," a white-painted mallet hangs from a cord above a piece of white fake fur in a white frame. It’s a parody of one of those old-fashioned fire-prevention kits, but here the “emergency” involves the touch of a person’s hand. Similar in spirit is "Strapped In," a row of small frames unified by a hazard-orange, construction-grade synch-belt; it's impossible to avoid thinking that the piece is about relationships. Muttel's whole display is very engaging, and he obviously has a gift for exhibition design. 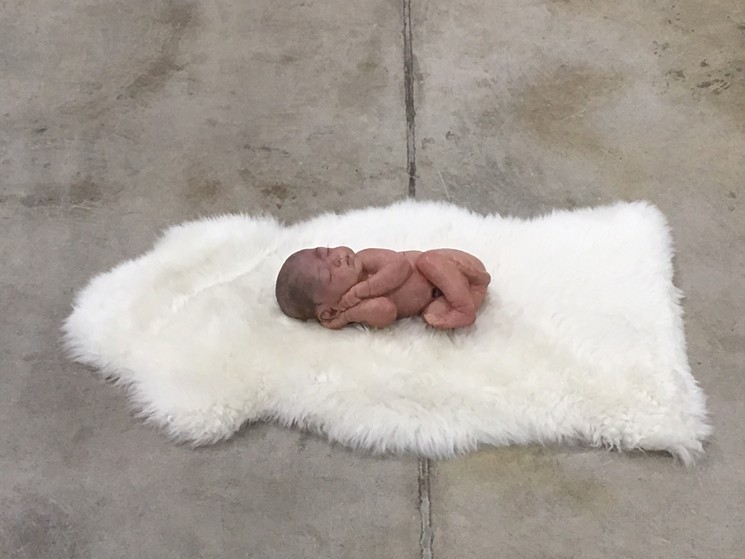 “Just Arrived From Where We’re Going,” by Justin Beard, found materials.
Courtesy of Dominic Muttel
A viewer definitely shifts mental gears entering Justin Beard: Small Brainstorms, which is ensconced in the Members’ Space. The show will change for each of its three weekends, but the initial incarnation was very busy — especially when compared with the Muttel installation. In this version, the entire show was a single small work that Beard had set in the middle of the floor in the otherwise empty room. “Just Arrived From Where We’re Going" consists of an accurate representation of a newborn baby that Beard found in a flea market and placed on a patch of white fur. As modest as this gesture is, the atmosphere that Beard's created set my hair on end. Birth, death and infinity — all in a little baby doll.

The baby will be replaced this weekend with a video called “Divot Vision,” in which Beard recorded the view of trees outside a window, using an imperfection in the glass to create surrealistic effects in the scenery. The show’s final weekend, January 19 through January 21, will be a surprise, but Beard hints at the idea of a performance.

The Muttel and Beard shows run through January 21 at Pirate Contemporary Art, 7130 West 16th Avenue in Lakewood. For more information, call 303-909-5748 or go to pirateartonline.com.