Facebook
A Facebook photo of the late Adam Lee and his wife, Erika.
As we've reported, Erika Lee, widow of Loveland Ski Area employee Adam Lee, who was killed last month beneath the Magic Carpet lift, a conveyor belt used in beginner ski lessons, has been frustrated by the dearth of information released to date about the circumstances of the tragic incident. But the first major study of the accident, just released by the Colorado Passenger Tramway Safety Board, raises as many questions as answers. The report reveals that there was nothing mechanically wrong with the lift, even though Lee spent more than an hour beneath it. The device only stopped after crushing Lee to death.

The document, accessible below in its entirety, contains photos of the Magic Carpet taken shortly after Lee died. Among the equipment depicted is the belt roller that personnel thought had halted because of a jam from snow and ice before they made a much more grisly discovery. But investigators aren't certain why Lee went beneath the Magic Carpet when he did, or why the lift's operator left the beltway on while his fellow employee was in a tunnel beneath it.

Although most ski areas designate certain areas for ski instruction, Magic Carpets like the one in Loveland are hardly ubiquitous. The beltway "is one of two such conveyors in Colorado," the authors of the analysis reveal.

According to the report, the Magic Carpet was fired up for the first time on December 28, 2017, at around 9 a.m., and its operator "observed no indication of mechanical or electrical problems with the conveyor." 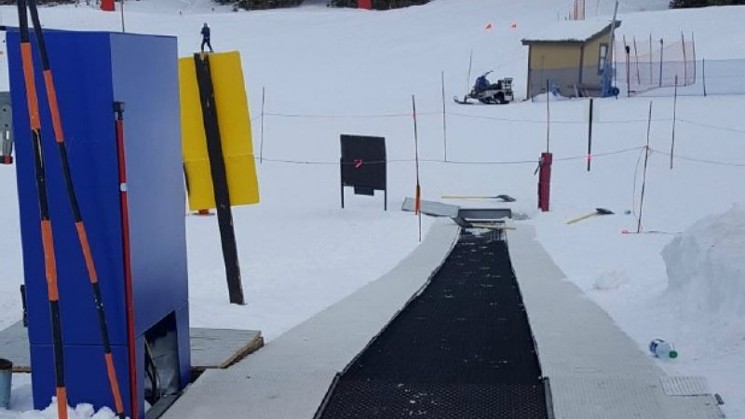 Loveland's Magic Carpet shortly after the accident.
Colorado Passenger Tramway Safety Board
At between 10:15 a.m. and 10:30 a.m. that morning, the operator saw Lee arrive at what's described as the "top terminal."

Lee is said to have "smiled and waved to the operator as he opened the hatch cover of the conveyor and accessed the crawl space" under it.

The report stresses that "the conveyor was in operation at this time and continued to operate normally to the skiing public" — a statement that's quizzical on two levels.

For one thing, the Magic Carpet's operator hadn't called for lift maintenance. But he didn't switch off the beltway as Lee climbed beneath it even though "industry standards prohibit the performance of maintenance beneath a conveyor while the conveyor is in operation."

The entryway to the tunnel beneath the Magic Carpet.
Colorado Passenger Tramway Safety Board
At 11:22 a.m., the Magic Carpet automatically stopped. The initial indication was "an overspeed fault," the document maintains.

The beltway's operator responded by notifying lift maintenance of the problem, and a repair worker arrived within minutes.

The report doesn't say whether or not the employee was informed about Lee having climbed beneath the lift around an hour earlier. Instead, it simply points out that the staffer attempted to "clear the overspeed fault and restart the conveyor belt," but "each restart immediately indicated a speed reference fault and the belt did not move."

The repair worker suspected "an ice buildup on the drive or return roller that was jamming the roller and prohibiting belt movement," the document continues — so he accessed the top terminal crawl space and began looking under the conveyor.

The maintenance tunnel beneath the Magic Carpet.
Colorado Passenger Tramway Safety Board
Doing so wasn't as simple as climbing into the aforementioned tunnel. Four bolts had to be removed from the lower terminal hatch in order to take out the panel above the tension roller.

That's when the employee "discovered the entanglement" caused by Lee's body.

The maintenance worker quickly cut the conveyor belt and pulled the tension roller in order to extract Lee, who was rushed to a nearby medical center, where he was pronounced dead. An autopsy found that he died from crushing chest injuries.

The subsequent investigation "found no indication of snow or ice buildup beneath the top, along the length of the conveyor or bottom terminal that would cause the unit to stop operating."

The caption on this photo in the report reads: "The normal return belt position is indicated by the cross-hatching and shows the belt running over the top of the smaller deflection roller. Entanglement point is shown by the blue arrow."
Colorado Passenger Tramway Safety Board
Moreover, the report goes on, "no mechanical or electrical system failure was observed. In addition, there was no damage to the conveyor beyond the belt, which was cut by lift maintenance in an attempt to rescue the victim."

The concluding section of the document acknowledges that "the reason Mr. Lee would enter the tunnel beneath the conveyor remains unclear." But the inquiry confirmed that "there was no malfunction of the passenger tramway related to this incident. In fact, the conveyor properly shut down when the return deflection roller jammed at the time of entanglement."

Hence, "the fatality that occurred on December 28, 2017, at Loveland Ski Area was not the result of a possible malfunction of a passenger tramway."

That's not the final word on the incident. A federal investigation by the Occupational Safety and Health Administration is ongoing, and OSHA's report isn't expected to be released for months. Until then, Lee's loved ones are left to wonder why he climbed under the Magic Tunnel in the first place, and why the operator didn't stop the beltway when he did.

Click to read the Colorado Passenger Tramway Safety Board report about the Adam Lee accident.