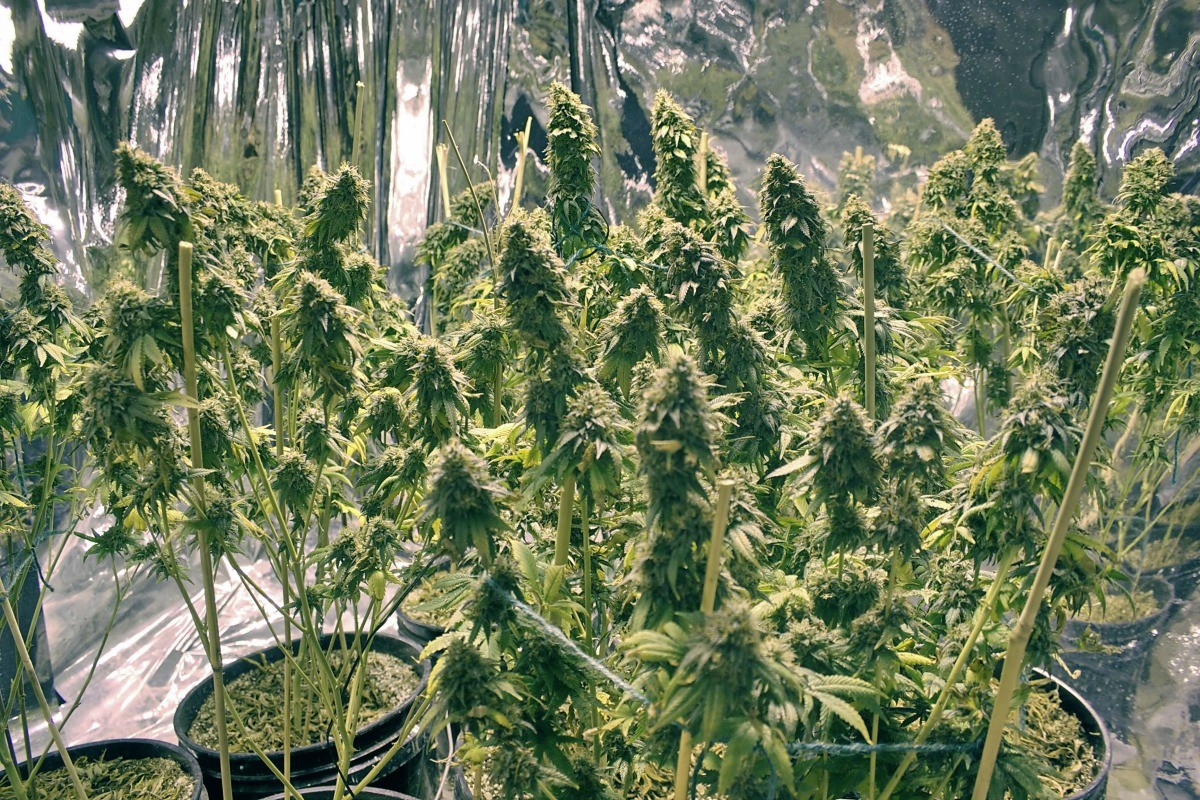 Flickr/Mark Eggrole
Coloradans are legally allowed to have private marijuana cultivations in their homes if they are 21 and older.
Detective M. Adam Hughes says he hasn’t found a meth lab inside a house in over three years during his work with the Colorado Springs Police Department. Now he gets complaints about large-scale marijuana grows inside neighborhood homes instead.

Hughes, who has worked for the narcotics division of CSPD for the past four years, calls residential marijuana grows the “new meth houses.” In a public presentation given to those in the real estate industry on Thursday, January 18, Hughes discussed the damage he’s found at homes that were used to grow large amounts of pot. According to Hughes, the two largest drug issues facing Colorado are the opiate epidemic and illegal marijuana operations, with many of those operations sending pot to other states, he says.

Hughes pointed to reports of rising out-of-state diversion from the Rocky Mountain High Intensity Drug Trafficking Area program as proof — however, the federally funded RMHIDTA and its studies are directed by Tom Gorman, an opponent of legalization in Colorado, and its data has been questioned by the media, public-health officials and legalization advocates in Colorado and other states with legalized marijuana.

Highlights from the RMHIDTA October 2017 report that support Hughes include a 20 percent rise in the number of highway seizures of Colorado marijuana since legalization in 2014, increasing to 346 in 2016. This represents a slower rate of increase than in the past, however: The number of seizures in 2013 had jumped 397 percent from 2008, increasing from 58 to 288, according to RMHIDTA data.

In 2016, program task forces also investigated 163 people or organizations illegally selling marijuana inside and outside of Colorado. While the amount of marijuana increased, it doesn’t say whether the number of investigations did. The Denver Drug Enforcement Administration also released a report in June 2016 with the same title as Hughes’s talk on Thursday: “Residential Marijuana Grows in Colorado: The New Meth Houses?” The report cites a “proliferation” of large grows in “hundreds of homes,” but it doesn’t cite specific statistics beyond the number of medical cardholders who were licensed to grow 55 to ninety plants at home.

"I think I’ve only seen one [house] that might have been a grow house,” said Greg Eckler, owner of Denver Realty Experts, a Denver County real estate agency and data analysis firm. “I don’t think it’s this widespread problem.” Eckler works with average- or above-average-priced homes in the Denver area, which was the top origin city for weed confiscated on the highway, according to the RMHIDTA report.

Hundreds of homes throughout the state is a small number compared to the 14,000-plus residential properties that have been sold in Denver County since 2015, according to statistics on Eckler’s website — and that's just Denver.

For home-buyer protection, Eckler recommends paying for a good home inspection to ensure there isn’t hidden mold; he also encourages his clients to research crime reports on the property. If significant issues were found, a buyer could always back out of the purchase. “The problem would be if you had a bad inspector or if they hid it enough,” Eckler said. “That’s when it would be a real problem."

Meth and marijuana production may both be damaging to structures, but they’re damaging in different ways, according to CSPD detective Lyle Coguill, who has been with the Springs narcotics division since August 2017. Coguill explained that the production and smoke of meth releases chemicals that are harmful to the body, which is why former meth houses needed to be certified as safe before they are sold.

Growing one marijuana plant won’t ruin a home, Coguill said, but the energy and water required by large-scale production can cause utility and sustainability issues. Mold is the most dangerous result of residential marijuana grows, which use powerful lights to keep homes between 70 and 90 degrees Fahrenheit as the humidity rises indoor from the plants. Hughes said he once saw a closet in a home used for growing that looked like somebody "painted black mold on the bottom.”

Hughes predicts that the smell and the destruction of some homes from large-scale pot grows could impact housing in Colorado if not resolved. “In the next ten to fifteen years, if we don’t get a handle on the home grows, I think we’ll have a depressed housing market in some areas because of this,” he said.

When medical and recreational marijuana were legalized in Colorado, the new laws included exceptions that allowed private home grows. A Colorado adult age 21 and older or a medical marijuana patient could grow up to six plants, but MMJ patients could get a doctor’s recommendation to grow up to 99 plants. “That’s what kinda started the whole black-market industry here in Colorado,” Hughes said. A black-market ring of six people can produce about 630 pounds of cannabis every ninety days, he added, which could net an average of $4,000 per pound on the East Coast, or an annual salary of $10 million per year.

A legislative bill passed in 2017 limited the number of plants on a residential property to twelve for a medical patient, but police are still finding houses and outdoor fields stocked with hundreds of pot plants.

The signs of a grow house are both obvious and often out in plain sight, according to CSPD detectives: The first sign is a strong odor, followed by noise from industrial fans and multiple air-conditioning units; there’s also usually exterior venting and transformer repairs. Heavy vehicle traffic, especially from cars with out-of-state plates, is also an indicator of drug trafficking.

The department knows of about 650 houses growing marijuana illegally right now, and it hears of new ones every day, according to Coguill, who said police would need to execute one search warrant every day for two years to catch up.

Hughes described a recent search in the Wolf Ranch area of Colorado Springs where his team found 464 plants in the basement of a $350,000 home. The operation had destroyed the interior of the home, he said, citing holes cut into the floor to vent out heat. But there was still “so much heat and humidity rising through it that the ceilings were literally breaking down,” he said. Hughes showed photos of damage done to homes with large grows, ranging from DIY vent work to holes cut through stairways for wiring. The exterior siding of the house can also “bleed,” or become warped in the winter as the hot air builds up and mold oozes out, he said.

To heat the plants, growers use much more electricity than a normal household, which is one way that police are able to show that the property may be an illegal grow site. Growers sometimes use hot-tapping methods to wire the electricity, setting the stage for electrical fires, CSPD detectives added. Over the past two months, Coguill said, they’ve responded to five fires sparked by electricity in a grow operation or butane hash-oil processing.

The plants also use up to a gallon of water each day, which is emptying out wells in some parts of El Paso County, according to Hughes. One thirteen-week growing cycle with fifty plants translates to 4,550 gallons of water, though very few marijuana strains have flowering cycles that long.

Hughes advocated to real estate professionals in the audience for a constitutional change that will ban residential growing. “You can’t just sit there and make wine at your house. You can’t make vodka at your house,” he said. “Take it out of the home and let licensed businesses sell this.”